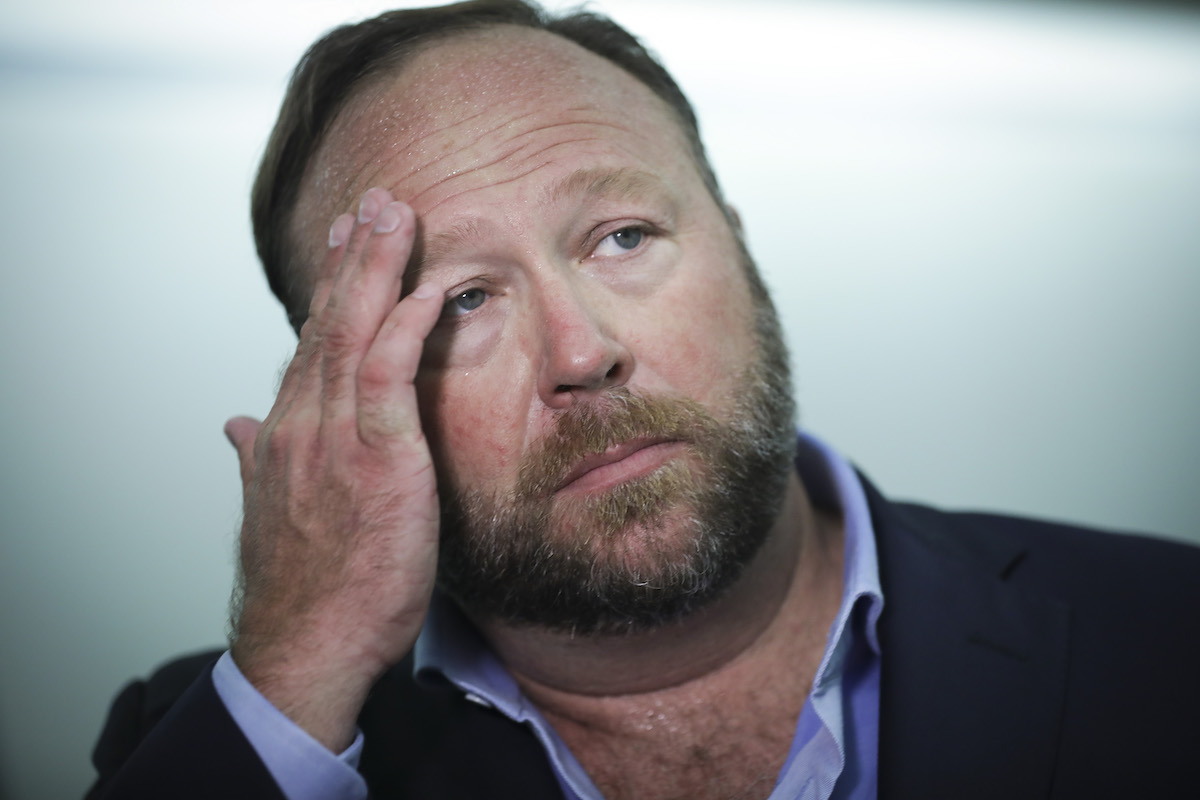 Alex Jones, host of the right wing conspiracy theory show InfoWars, was recently ordered to pay nearly one BILLION dollars in damages to the families of the victims of the Sandy Hook Massacre. Jones claimed that the 2012 massacre of schoolchildren by shooter Adam Lanza was a hoax staged by gun control activists to erode support of the Second Amendment. He went on to say that the parents of the children killed were in fact “actors” who were being paid by God-knows-who to give the “hoax” more credibility.

After the ruling, Jones filed for bankruptcy and is now the poster child for the phrase “f*ck around and find out.”

But who exactly is this scumbag? Where did he come from? Where did he go? One can only hope that he will be an unfortunate blip in history, just like Cotton Eyed Joe. So let’s dive in to that ugly little history, shall we?

According to Southern Poverty Law center, Alex Jones was born in 1974 in Dallas Texas to a dentist father and a homemaker mother. He moved to Austin, Texas during his high school years, where he played football, smoked weed, and did quite a bit of reading. According to Jones, the book that changed his life was None Dare Call It Conspiracy, a 1971 book by Gary Allen and Larry Abraham. The book claims that big bankers financed the communist revolution in Russia as an experiment in order to see if they could influence the governments and economy of the world, thereby creating the groundwork for a New World Order.

Instead of thinking “woah… I need to get my hands on whatever these dudes are smoking,” Jones apparently took this New World Order conspiracy to heart. Jones was also influenced by antigovernment sentiment that was growing in Texas, which culminated in the 1993 Waco Siege, where officers from the Bureau of Alcohol, Tobacco, and Firearms engaged in an brutal battle with the cult of the Branch Davidians at their compound only 100 miles away from Austin. Jones dropped out of the Austin Community College that same year, and began hosting a viewer call-in show on Austin’s public access television (PACT/ACTV), where he no doubt learned that if you yell and scream batshit ideas into the airwaves, someone is gonna listen.

An asshole is born

Alex Jones developed a taste for conspiracy, and soon was unable to separate fact from fiction. In 1995 he claimed that Timothy McVie (aka the unibomber) was working in tandem with law enforcement personnel from the U.S. government, and that the people who supplied him with this information “mysteriously died” after he interviewed them. In 1996, Jones moved to Austin’s KJFK-FM to host a show called “The Final Edition,” where he attempted to galvanize his listeners to rebuild the compound of the “murdered” Branch Davidians as a memorial and take a stand against the impending “martial law” that he claimed the U.S. government would soon declare. According to The Austin Chronicle, he was fired in 1999 because his views made it nearly impossible for the station to attract sponsors despite the show’s high ratings. Gee, I wonder why?

But did that little mishap cause him to rethink his life choices? Not at all! Jones quickly began to broadcast out of his house via his newly minted website Infowars.com to any AM, FM, and shortwave radio stations that would have him. Like head-lice, his views spread quickly, and he was soon in syndication on over 100 stations.

The Golden Age of bullshit

Alex Jones’ career reached new heights (or lows, rather) after the World Trade Center attacks on 9/11. In an interview with Rolling Stone, Jones said he told his listeners “Those were controlled demolitions. You just watched the government blow up the World Trade Center”. He claims that he lost over 70% of his listeners that day, but was “proud” that he didn’t compromise on his viewpoint. Yuck.

Jones went on to produce the films Fall of the Republic: The Presidency of Barack Obama and The Obama Deception, which allege Obama was attempting to undermine the U.S. sovereignty in order to establish a “New World Order.” He also adopted the birther narrative, and claimed that Obama was secretly like a Kenyan-born Muslim bent on destroying the United States. Jones’ story is so wild that I’d like to say “you can’t make this shit up”. But he did. He really did. All of it.

Next began the series of conspiracy claims that would prove to be his downfall. In 2012 he claimed that the Sandy Hook Massacre was a “false flag” operation, and made similar claims about a slew of other mass shootings including the Dark Knight shooting in Aurora, Colorado, the 2013 Boston Marathon bombing, and the Pulse Nightclub shooting in 2016, and the deadliest mass shooting in U.S. history in Las Vegas in 2017. He even went so far as to claim that the government was responsible for a 2011 mass shooting in Tuscon, Arizona, saying that the government planted ideas directly into the shooters mind using “geometric psychological warfare” in order to vilify gun owners. Again, I can’t make this shit up. He already did.

The fall (as if he could sink any lower)

As the Infowars lies continued to pile up, so did the lawsuits. Jones was first sued by Chobani (YES THE YOGURT COMPANY) in 2017 after he claimed that a Chobani factory in Idaho was “importing migrant rapists” and was also responsible for the rise of tuberculosis cases in the area. Like… WHAT!?

Jones also was ordered to pay $50,000 to Brennan Gilmore, a counterprotestor at the infamous Unite The Right rally in Charlottesville, Virginia. Gilmore had recorded a cellphone video of the truck attack that caused the death of Heather Heyer and injured 30 other people. Infowars claimed that Gillmore had ties to billionaire philanthropist George Soros and was also linked to the CIA. As a result, Gillmore was repeatedly doxxed and threatened with violence online.

Infowars also faced lawsuits from employees INSIDE the company as well. In 2018, two employees of the website filled a complaint with the Equal Employment Opportunity Commission, alleging that they were victims of racial and gender discrimination. Really? Infowars is a hellish environment to work in if you’re not a straight white guy? I never would have guessed! Apparently these two didn’t think it would be an issue either. They were wrong. Their lawsuits are still pending, but I doubt they’re going to see a penny after Jones pays off his biggest lawsuit yet.

Which brings us back full circle. Jones was sued big time for his claims about the Sandy Hook Massacre, and has been ordered to pay victims $965 million. It’s unlikely that Jones is worth that much, but no matter how much money he has in the bank, he’s going to be screwed up for life. Karma’s a bitch, and that, despite everything Jones would have you believe, is the gospel truth.