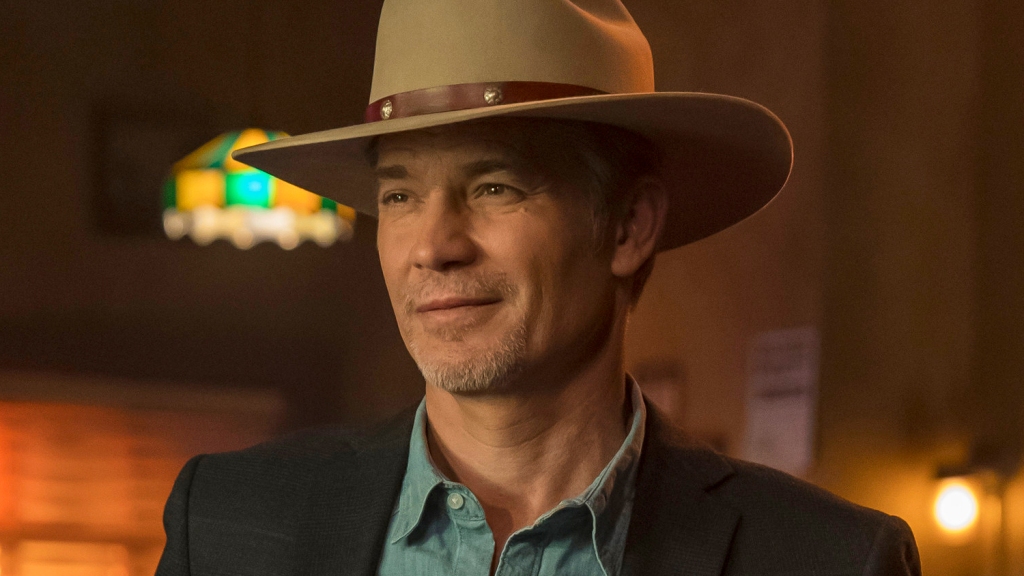 Justified: City Primeval isn’t so much a spinoff. But if the series requires a label, “it’s an extension of the universe” co-star Adelaide Clemens said Thursday during the show’s TCA session.

Based on the Elmore Leonard novel, the new limited series sees Timothy Olyphant’s U.S. Marshal Raylan Givens back — not in Kentucky but rather Detroit. The show takes place eight years after the ending of the original (which wrapped on April 14, 2015). Raylan is balancing life as a marshal and part-time father of 14-year-old Willa (played by Olyphant’s real-life daughter, Vivian). However a chance encounter on a Florida highway sends him to Detroit, where he crosses paths with Clement Mansell (Boyd Holbrook), aka The Oklahoma Wildman, a violent sociopath who’s already slipped through the fingers of Detroit’s finest once and wants to do so again.

(You’ll remember that the series finale of Justified jumps forward four years and we see Raylan working in a U.S. Marshal Miami outpost. His nemesis Boyd (Walter Goggins) is behind bars.)

What was the worst-case scenario that would possibly scare Olyphant off in returning?

“My biggest concern was that I’d only make a pile of money,” joked the actor to great laughs at Pasadena’s Langham Hotel ballroom.

Getting serious the actor said, “I didn’t have any concerns. I love these guys,” referring to his EPs Graham Yost, Michael Dinner, Dave Andron, Peter Leonard and Sarah Timberman, who were all onstage.

“I thought as long as we were still in the Elmore Leonard world, and the Graham Yost world that the two of them created, I just thought I’d be there for it,” said Olyphant.

Can we expect a further extension of the universe?

“I would show up,” exclaimed Olyphant.

Yost beamed, “Michael (Dinner) has been pitching since year one that it would take place in Italy or Hawaii!”

“He was in a position to make this one in Italy!” responded Olyphant enthusiastically.

“It’s an extension of the show in a storytelling mode, even if it’s Detroit. I feel like a hallmark of the original show is that you’d spin out into Margot Martindale and Kaitlyn Dever’s world and live there and leave our regulars,” said Timberman about City Primeval.

“I think this show repeats what Justified did so well, which is create these really detailed universes, people who aren’t good guys or bad guys, but grey guys,” she added.

One journalist in the room wondered if in its new setting, City Primeval would deal with the issue of race.

Deadline asked Olyphant about the July shooting which went down on the set, where two cars whose occupants were engaged in a gunfight smashed through the production’s barricades. City Primeval was forced to close down the set for a few days. Word was that Olyphant shielded a production assistant.

Said Olyphant about whether that occurred, he answered, “Not true — I shielded numerous people,” to great laughs in the room.

“In terms of shooting in Chicago – I love that town. Apparently a hundred rounds or so is not enough to fall out of love with Chicago,” said the actor when asked about whether he’d do another project again in the Windy City.

Added Dinner about Chicago, “I joke if it weren’t for the weather, I’d be living there. It’s such a great place, great people to work with.”

He continued, “We live in dangerous times. Any urban environment – we just live in a different world than it was 20 or 30 years ago. Chicago is a great place to live, it’s a great place to work. What happened that night was terrible. It was also an aberration.”

Anfisa Nava Resurfaces with Life Update: I Got My Degree and a New Home!
Steve-O Bracing for Bam Margera’s Death, Has Tried Everything for Sobriety
All the Stars We’ve Lost in 2023
‘Five Nights at Freddy’s’ – Filming Has Finally Begun on the Blumhouse Horror Movie
R. Kelly Feels No ‘Relief’ After Catching Break in Chicago Sex Abuse Case