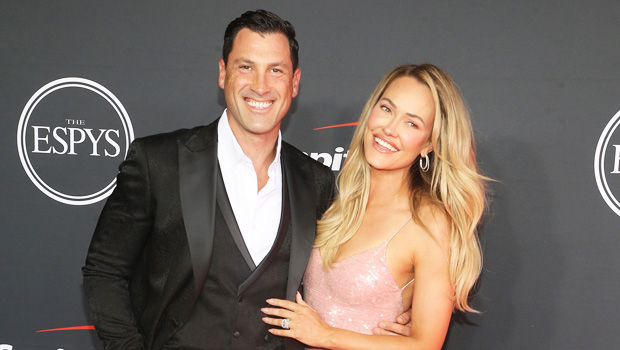 Peta Murgatroyd, 36, is adding a new member to her dance team! The Dancing with the Stars pro and her husband, Maksim Chmerkovskiy, 42, announced they are expecting their second child together on Jan. 13.. The happy couple already shares a five-year-old son Shai, who was born in January 2017. Now, Shai will have a new baby sibling. “It brings me immense joy to finally announce that @maksimc and I are expecting our Chmerkovskiy #2,” Peta announced in an Instagram post that showed off her growing baby bump.

After two years of constant struggle and heartache, three miscarriages, and a failed embryo transfer…we have a healthy bun in the oven :)) It was a shock to all of us, and we found out right before I was going in for my second round of IVF,” she wrote. “I want to thank ALL OF YOU who’ve been on this fertility journey with me from the beginning. It feels like I’m sharing this news with my extended family. Thank you for sharing your stories and tips to get me through my IVF cycle, and thank you for the plethora of encouraging comments and DM’s…I read them all.”

“This news has brought extraordinary bliss to our family, and we have so much to be grateful for,” she said, adding that her bundle of joy is arriving in June 2023.

Peta detailed her pregnancy journey to PEOPLE. ” I think it was the fastest positive I’ve ever seen in my life,” she said. “It just came up super quick, and I was just shocked. It’s been completely different from my past pregnancy.” The miscarriages meant Peta was reluctant to to announce the pregnancy, but now that she’s past her first trimester, she’s confident to show her bump. “It’s going to be so good that I can just go around and not wear baggy clothes now,” she said. “I can get on social media and show my whole body. I’ve been doing everything from the boobs up.”

Peta and Maks have been trying to expand their family for the past few years. Peta revealed in June that she experienced three miscarriages. The first pregnancy loss happened in the fall of 2020, followed by a second miscarriage nine months later. In October 2021, Peta suffered another miscarriage before she learned she was pregnant. Maks was away in his native Ukraine at the time and found out about the devastating news on the phone.

“I ultimately had no idea [I was pregnant],” she People when revealing the details of her third pregnancy loss. “Which in hindsight was better for my recovery because I didn’t have that super joyous moment of, ‘I’m pregnant again! I just had the moment of, ‘You lost it.’ ”

In that same interview, Peta and Maks revealed they had begun IVF treatments to get pregnant. “For the first time in nearly two years, I feel excited. I’m in a much happier place. I got answers,” Peta said then. “I don’t have any other words but hope and positivity. I’m crossing my fingers that this is going to work.”

Peta and Maks’ efforts worked out, and now they’re expecting another bundle of joy! We’re so thrilled for the professional dancers.