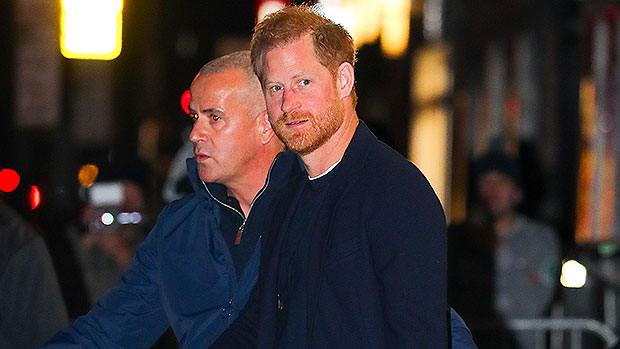 Prince Harry continued his publicity blitz on Tuesday, January 10th, with a good-natured pre-taped appearance on The Late Show with Stephen Colbert! The Duke of Sussex, 38, shared tequila shots with the popular comedian at the Ed Sullivan Theatre in Manhattan a night earlier to discuss his controversial new memoir Spare. Stephen baited the royal with a playful pre-interview tequila, with the drinks hilariously enhancing his responses. When introducing his illustrious guest, Colbert noted that he’s “revealing a lot of things” in the book, which he added must be “nerve wracking.” “Would you like a cocktail before we begin?” Harry giggled before saying, “yes please!” “I hear you like tequila,” Stephen said, as he whipped out a bottle to begin pouring.

“Does he ever make you guys a drink, or not?” Harry quipped while pointing to the audience, adding that “everybody wants a drink.” “They’re already on your side man, you don’t have to get them drunk,” Stephen joked before offering him extra limes.

During the exchange, the comedian points blank asked Harry if he “fact checks” Netflix’s The Crown, which he admitted he does watch. Harry pretended to seriously take notes before laughing and admitting, “yes, I do actually. Which, by the way, another reason why it’s so important that history has it right.” Harry looked sharp in a gray jacket over a midnight blue button up shirt as he bantered with Stephen.

The appearance initially kicked off with a hilarious BTS skit of Stephen preparing for a royal guest with trumpeting horns. When Harry attempting to blow off the fanfare, Stephen quipped “what are you talking about, this isn’t for you!” Tom Hanks then arrived in an unexpected cameo, as Prince Harry hilariously tossed rose petals on the Castaway actor.

Cressida Bonas: 5 Things About Prince Harry’s Ex Who He Cried To About Princess Diana’s Death

Harry further addressed his move to California with Meghan Markle, 41, and the chaos leading up to it. “I’ve never seen the level of abuse and harassment,” he said, adding that he was “naive going into it.” Still, he clearly indicating he was happy in California.

The former Colbert Report host previously ribbed the prince with a teaser for the interview, joking that the explosive new book, which hit shelves on Tuesday, is “also available on audiobook and a commemorative plate.” In all seriousness, though, he also praised the book. “I’ve read the book — it’s very enjoyable, quite emotional, quite revealing. I’m going to have so much to talk about with his Harryness,” he said in the clip, posted to Twitter on January 9. Fans who had been seated in the audience on the night of the taping had leaked news that the prince had indeed enjoyed tequila shots with Stephen.

Many of Prince Harry’s most stunning revelations have been turned out by the public in recent days. In an account of a physical fight with older brother Prince William, 40, Harry claimed that William knocked him to the floor. “It all happened so fast. So very fast,” he wrote. “He grabbed me by the collar, ripping my necklace, and … knocked me to the floor. I landed on the dog’s bowl, which cracked under my back, the pieces cutting into me. I lay there for a moment, dazed, then got to my feet and told him to get out.” He admitted that Prince William, who is now second in line to the British throne after the death of Queen Elizabeth, later apologized and was “regretful” — though he also claimed he was teased insensitively over his anxiety and panic attacks.

He’s also taken aim at his stepmother, Queen Consort Camila, calling her “dangerous,” and revealed an allegedly particularly tense text exchange between his wife and Princess Kate Middleton over a bridesmaid dress for Princess Charlotte. The fallout over the “French couture” dress, he claimed, left the bride-to-be “sobbing” on the floor just days before her royal wedding to Prince Harry. He also admitted during a recent 60 Minutes interview that he watched videos of his late mother Princess Diana in order to cry and process her death.

Harry and Meghan, who now live in California and are parents to two young children, have also been opening up their lives through their Netflix docuseries Harry & Meghan, which debuted on the streaming giant in December. The couple caused controversy by stepping back from royal life back in 2020 amid intense media and public scrutiny over their personal lives.