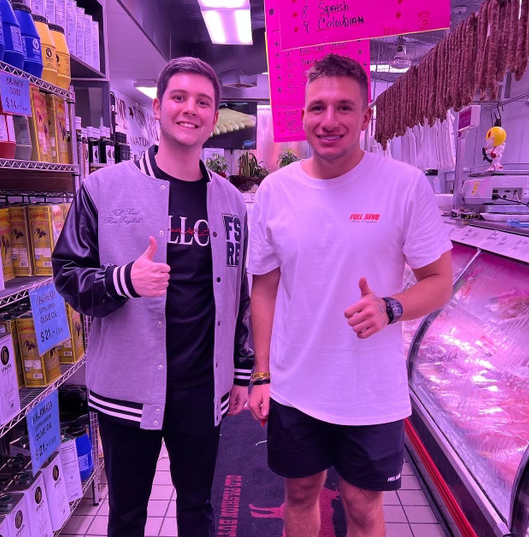 Remember the 2003 trailer for the upcoming Bryan Singer film X-Men 2: United? Now it’s the time for those who are different, to stand together? That kind of messaging rings loud and clear with the agency A-DOT Media, founded and run by artists and entrepreneurs Damir A.

Romano and Mark A. Wagner. Romano and Wagner may not be mutants in a comic strip fighting against a world that hates them, but they’re in a business for which such an analogy proves alarmingly accurate. In an industry where the bottom line is all, Romano and Wagner know how to game the system while pushing forward and showcasing talent that wouldn’t be considered conventional by commercial standards.

This is evidenced by the collaborators A-DOT Media presents, including the NELK Boys’ new Fullsend line, designed and orchestrated by NELK and esteemed street and collage artist Ron English. English in particular represents what Romano and Wagner are pushing, and its distinct novel flavoring. True to form, English himself is whatever the artistic synonym to ‘actorvist’ is. His work is at once fueled by pop culture references, cultural mores, and a general sense of disdain toward the status quo.

English is part of a dying breed, a genuinely authentic representative of societal shifts through a punk artistry lens. “At some point you have to make a decision about what your art is going to be and what purpose it is going to serve,” he said in an interview with Widewalls. “Most high art ignores the social or political situation it is created in, opting for a voice in a smaller, more esoteric, conceptual conversation. For me having a distinctive perspective that acknowledges the global situation we find ourselves is more potent than willfully ignoring it. This approach also gives my art works a life beyond being objects of fashion distraction and decoration.”

Presently English’s new creation Fullsend depicts a skeletal punk figure with elongated teeth smoking a cigarette. The image feels like an amalgam of numerous cultural references, married into an avatar that is at once disquieting as it is strangely compelling. If you’re familiar with English’s work, however, it’s just another Tuesday.

The kind of scrappiness in his work is part of his entire M.O., and personal as much as professional convictions. “When you move to New York and become an artist, something you don’t realize is that you get separated from everybody because it may take you three months to make a painting and then the painting is a bit of change. Suddenly, you’re in this exclusive club of very wealthy people that are collecting the paintings and there is no connection to anyone else anymore. I’ve always had the connection to street art, but you can’t buy the street art. Vinyl toys for me, it gave me a closer connection with everybody,” he stated, in an interview with Hypebeast. “…(Toys) (are) accessible art. If you’re 23, you can buy a toy.

It’s nice also that the culture kind of mimics the art culture. In 1983, one of my paintings was like $300 USD and then they were $500 USD and then $5,000 USD and then $20,000, $50,000, they go up in value and that’s one of the attractions of people collecting art. It’s not just to decorate your house, but it’s also an investment. This culture kind of mimics that culture. So, let’s say you collect for 10 years and then you get married and your wife really hates the toys or whatever and think that you need to re-liquidate this collection, well, now the collection actually has more value than what you originally put into it. You can liquidate and then get three or four times your money. It’s nice that it’s a hobby and not just a sinkhole for money.”