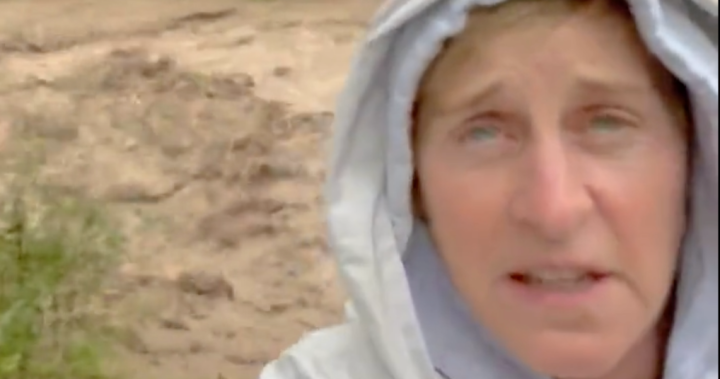 A viral video posted by Ellen DeGeneres is drawing attention to the extraordinary flooding hitting California amid a storm-related state of emergency.

The former talk show host posted a clip of herself standing on the bank of a raging stream on her property in Montecito, where other celebrities like Oprah and Prince Harry also reside.

“It’s probably about nine feet up, and it could go another two feet up,” DeGeneres said in the clip, noting that this stream on her property usually “never flows.”

On Monday, 90 per cent of the state of California was under flood watch and thousands have already been forced to evacuate their homes, CNN reported. The atmospheric river-fuelled storm is being called the most impressive storm in nearly 20 years with many areas getting a month’s worth of rain in a single day, according to the National Weather Service in Los Angeles.

Montecito, where DeGeneres lives, was also put under evacuation orders on Monday, the five-year anniversary of a similar deadly storm that hit the seaside town in 2018, claiming the lives of 23 people.

6-year-old’s shooting of Virginia teacher was ‘not accidental,’ police say

“We need to be nicer to Mother Nature ’cause Mother Nature is not happy with us,” she added. “Let’s all do our part. Stay safe everybody.”

The official death toll attributed to the storm rose to 14 on Monday and a five-year-old boy who was swept away from his mother’s car by the floods is still missing. He has not been declared dead, according to the San Luis Obispo County Sheriff’s Office, but the roughly seven-hour search for him only turned up a shoe before water levels were too dangerous for divers.

California has been in a state of emergency since Sunday when President Joe Biden authorized the Federal Emergency Management Agency to step in and help coordinate disaster relief efforts.