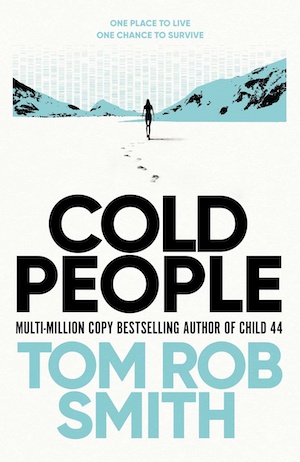 Every author dreams of that blockbuster hit novel – a prize winner, lauded by readers and critics alike. In 2008, Tom Rob Smith achieved it with Child 44. It was even made into a major movie starring Tom Hardy, Noomi Rapace and Gary Oldman, and main character Lev Demidov appeared in two more bestsellers. Smith then branched out with a stand alone psychological thriller, The Farm, in 2014. Now he has written the near-future, climate disaster novel, Cold People, which combines post-apocalyptic sci-fi with existential thriller.

The preface is about a Polynesian explorer 2,000 years in the past. He discovers a cold land, musing that such a climate could only be inhabited by a savage tribe. Is he right? Fast forward two and a bit millennia and that’s one of the philosophical issues Cold People grapples with. This is a tale of a population desperate to survive in the extreme cold of Antarctica – a chilly reflection on mankind making a fresh start. Will our better angels or our demons prevail? Will we make the same old mistakes or rise to the harshest challenge we’ve ever faced with hope and humanity?

More specifically, the story is about Liza, who is holidaying with her parents and her sister Emma in Lisbon when the apocalypse happens. An armada of spaceships wreaks havoc across the world, the destruction a prelude to an instruction to all who want to survive. An intelligence greater than man’s, as HG Wells would have it, is now calling the shots. Humanity has 30 days to reach Antarctica, the one place people will be allowed to exist. Thrown together by circumstances Liza, Atto, the man she hoped to have a fling with, and her family flee as part of a mass migration.

A short while ago, Liza was choosing between becoming a doctor or striking out on a more adventurous but unknown path in life. Now the choice has been made for her as she faces the same existential struggle as all the other survivors.

The best and the worst of humanity comes out in this story. Some make it to Antarctica and an impenetrable border is erected at the precise moment the 30 days are up. Those inside the new cordon are safe, the rest will perish. A new society has to be forged in the toughest of conditions with temperatures of -50°C. How will the survivors adapt? Will the alien invasion bond us in our common plight or make us more suspicious of each other?

Fifteen years before the invasion, a program began at St Mungo’s Sound base station in Antarctica, a scientific experiment run by the US that introduced the Cold People. Who are they and how do they fit into this new world order? Will people struggling to build a new life better understand the mistakes humanity has previously made and learn from them?

The themes in this novel are as in-your-face as the actual climate crisis that we are currently facing, with the timeframe accelerated by the introduction of aliens. This is about man’s wilful and thoughtless destruction of the planet and precious resources squandered. Virgin lands, ripe with opportunity, are plundered to the point of extinction of the species. It’s also about how we treat each other, about slavery, racism, forced migration and values in society. Cold People is fecund in ideas and themes. Smith muses on what would happen in this new environment – are we to be ruled by our fears and prejudices, othering, competitiveness? Or will we rise to the challenge, understand our mortality, our need for each other and for the planet?

So this is a novel of big themes and clearly Tom Rob Smith was exorcising some demons too. It all sounds a little message heavy, and in truth it is at times; this is a philosophical novel as well as a strange adventure. Although lightly handled it’s difficult to strike that balance between themes and the essence of an entertaining story. That said, this is undoubtedly a gripping read. The story of the survivors and the Cold People, is fascinating. You will want to know what is going to happen next with the characters, who are very well drawn and are intriguing. Smith is an inventive novelist and the world he creates, alien invasion aside, is plausible.

Cold People is original, relevant and page turning. There’s a boldness and an intelligence here, with a story that will stay with you. Just don’t let the aliens lead you to think of it as a sci-fi adventure.

For another take on climate change and catastrophe see The Coming Darkness by Greg Mosse.