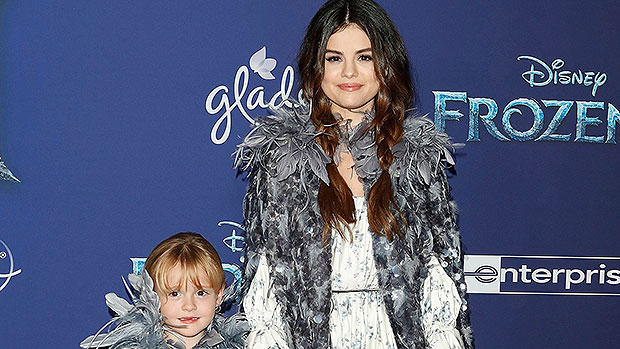 Selena Gomez, 30, is celebrating Nicola Peltz! The singer and her adorable little sister Gracie, 9, both adorably kissed the actress on the cheek ahead of her 28th birthday on Jan. 9 and shared the moment in photos on Instagram. The trio appeared to be at some fancy event, in the snapshots, and were all sitting down at a table when they cute display of affection happened.

“It’s not your bday yet but let’s celebrate NOW!” Selena captioned the post, which was shared on Jan. 7. Nicola wore a black sleeveless dress and had her hair up as Selena rocked an all black outfit that included a sweatshirt. Gracie wore a white sweater and had her blonde locks pulled back in a ponytail.

This isn’t the first time Selena and Nicola have been spotted together. The duo have seemed to be enjoying a close-knit friendship lately and have appeared in several photos and videos together. They recently welcomed in 2023 on New Year’s Eve in matching silver sparkly dresses during a vacation in Mexico. Nicola, who’s married to Brooklyn Beckham, shared photos from the memorable night on her Instagram page.

The close friends also showed off matching upper arm tattoos that spelled out “angel” in a recent photo and Selena shared several snapshots from their holiday week, which included epic boat rides. The post also included photos of her snuggling with Nicola and her hubby. “Fine calls us a throuple #foreverplusone,” she joked in the caption.

When Selena’s not making memories with Nicola and Brooklyn, she’s focusing on her dating life. A source recently said that although she hasn’t been romantically involved with anyone in a serious way for a while, she’s ready to once again look for someone special. “Selena is feeling positive and optimistic,” the insider told ET. “She is open to dating.”

Before she embraced being single for a number of years, the beauty dated Justin Bieber on and off until May 2018. He’s now married to Hailey Baldwin, whom Selena posed for friendly photos with at an event last year.

Selena Gomez’s New Album Will Cover Secret Romances, & Could Debut In 2023 With 24 Songs