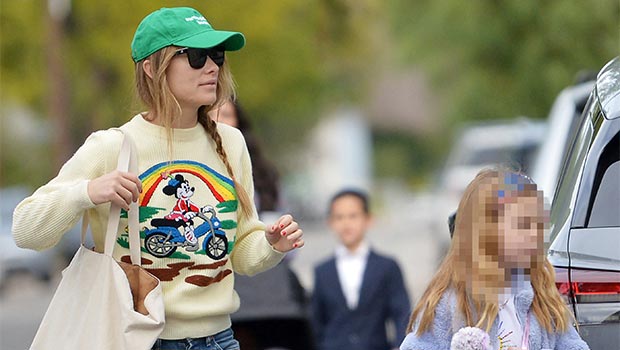 Olivia Wilde, 38, spent some quality time with her two adorable kids, Otis, 8, and Daisy, 6, just one month after she and Harry Styles called it quits. The actress, who shares her son and daughter with ex Jason Sudeikis, dressed casually in a white Mickey Mouse sweatshirt, jeans, and yellow and red sneakers during the outing. She also added sunglasses, a green baseball cap, and had her hair in a braid as she held a tote bag.

Little Otis held an acoustic guitar as they all walked outside together and wore a long-sleeved black graphic tee, dark green sweatpants, blue socks, and black and white sneakers. Daisy showed off a white top under an opened gray Sherpa-style zip-up top, white pants, and black, gray, and pink sneakers. The cutie also had her hair down and carried a purse across one shoulder.

Olivia’s latest family outing comes after a source said that her breakup with Harry was only temporary and claimed “neither will say it’s over” for good. “Harry will not say that they have broken up – just that they are taking a break and putting their relationship on pause,” the source told HollywoodLife EXCLUSIVELY in Nov. “No one thinks that they will resume the relationship after his tour, but Harry says that he does not know what the future holds.”

On Nov. 15, Olivia was spotted at Harry’s show in Los Angeles, CA for his Love On Tour and had brought along Otis and Daisy. They were dancing in the crowd and looked happier than ever, so many were confused when just three days later, their split was publicly reported for the first time. “Bringing her kids to see his performance was not strange to them because their kids adore Harry, and he wanted them there,” she source explained.

“When Olivia brought the kids to his concert, they had already discussed their plans with each other,” they added. “They have been talking about it for some time. But he will not say it is over and neither will she. Nothing changed from when she brought the kids to the concert to when it became known to the public. The kids love Harry and Harry loves them.”