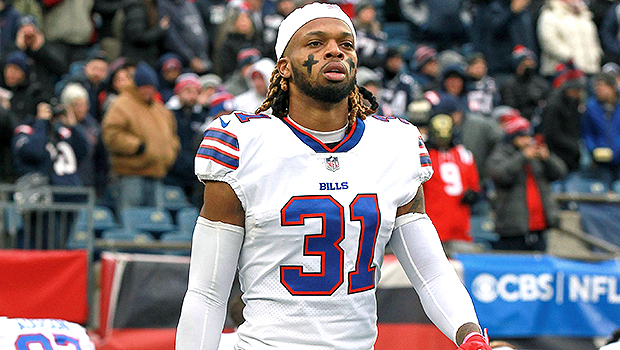 Damar Hamlin released his first statement following his terrifying on-field collapse during the Jan. 2 game between his Buffalo Bills and the Cincinnati Bengals. Damar, 24, suffered a cardiac arrest after tackling Bengals Tee Higgins and was transported to the University of Cincinnati Medical Center, where he was initially listed in critical condition. On Saturday, Jan. 7, Hamlin spoke for the first time since the event, making an emotional statement on his Instagram.

“When you put real love out into the world it comes back to you 3x’s as much,” he wrote alongside a photo album of himself. “The Love has been overwhelming, but I’m thankful for every single person that prayed for me and reached out. We brung the world back together behind this. If you know me you know this only gone make me stronger. On a long road keep praying for me!”

Hamlin collapsed in the first quarter of the Bills-Bengals game. Damar tackled Tee Higgins in what appeared to be a normal collision. Higgins led with his right shoulder, notes ESPN, which collected with Hamlin’s chest. After the hit, Damar stood up and stayed on his feet for three seconds before collapsing to the ground. Athletic trainers rushed to his aid and began to administer CPR. Hamlin received oxygen and was taken off the field 16 minutes after he collapsed.

“If there appeared to be head trauma, then that would open the door to other things,” Dr. Rigved Tadwalkar, a cardiologist at Providence Saint John’s Health Center in Santa Monica, told the Los Angeles Times about Hamlin’s injury. While Dr. Tadwalkar was careful to not attempt to diagnose the Bills player from afar, the medical professional said the damage has the hallmarks of catastrophic chest trauma.

“But outside of [head trauma],” the doctor told the LA Times, “it would likely be one of these things: Either he had some type of undiagnosed condition, and this was sort of a routine play that kind of pushed things over the edge, or he was perfectly fine and was unlucky and had the wrong type of injury at the wrong time that caused structural or electrical heart issues.”

The ordeal struck terror throughout both teams, who were concerned over their fellow NFL player. The Bills knelt together in a circle after Hamlin was removed from the field, with the defense heading back to the field to resume play, per ESPN. Fans on Twitter noted that Bengals quarterback Joe Burrow was warming up as to resume play (the NFL denies that they were planning to go on with the game.)

Peyton Hillis: 5 Things To Know About Former NFL Star in ICU After Saving His Kids from Drowning

“Frankly, that aspect never crossed my mind or their mind internally,” NFL executive vice president of football operations Troy Vincent said during a conference call following the incident. “We asked that [referee] Shawn [Smith] communicate with both [Zac] Taylor and Coach [Sean] McDermott getting the players together. Frankly, it was just about getting a pulse of where they were at that particular time.”

Shortly after the incident, Hamlin’s Chasing M’s Foundation received over three million in donations. The foundation’s toy drive, established on GoFundMe in 2020, was set for $2,500 to benefit a daycare in his hometown, McKees Rocks, Pennsylvania. As of Jan. 3, it had over $3.7 million from over 141k donations.