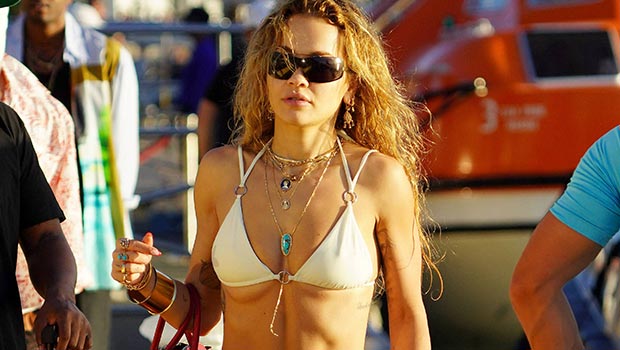 Rita Ora, 32, sizzled in a cream colored bikini as she vacationed in St. Barts! The British-born singer showed off the white triangle top and low rise bottom by designer Stella McCartney as she posed with slicked back hair in the snaps posted to her Instagram page on Friday, Jan. 6. In the first photo, she also added a risqué t-shirt from brand Pristine featuring the photo of a topless woman — later removing the clothing item to show off her bikini (and toned abs).

She added a pair of oversized, pink-lens aviators to the look along with silver earrings and layered shell necklaces, adding to the island vibe. Rita echoed the ivory shade of the swimsuit with a wide bangle over silver bracelets on her left side, along with another thinner cream bracelet on her right wrist. Her manicure also appeared to be on point with an on-trend french style with red tips. While she opted to go barefoot, she still dressed up her ankles with a pretty anklet on her left leg.

“Out with the old and in with the new….Coz you only love me!!” she captioned the photos, referencing her upcoming song “You Only Love Me,” which is the lead single from her third album. “#RO3 #IMBACK #Youonlyloveme,” she added. Husband Taika Waititi, 47, appeared in a brief teaser for the song, with the director kissing her cheek as the two watched a romantic fireworks show on a beach — seemingly celebrating New Year’s Eve on a beach on the French island of St. Barts.

The two secretly tied the knot back in August after over a year of dating, as the pair were initially linked in early 2021. The ceremony reportedly took place in her native if London, England in an “intimate” ceremony. “It was a really intimate ceremony and super special for everyone there,” a source reportedly told The Sun.  “Their nearest and dearest can see how madly in love they are. Despite living in the spotlight, Rita is determined to keep the relationship as private as possible and didn’t want to make a big song and dance about the wedding,” the insider also said of the marriage.