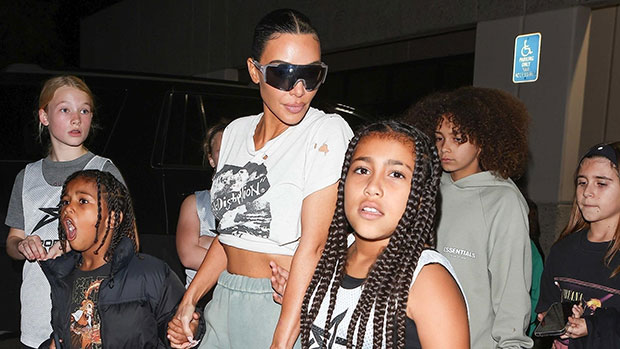 Kim Kardashian, 42, proudly cheered on her daughter North West, 9, at a recent basketball game in Los Angeles, CA. The reality star rocked a white graphic crop top and roomy gay pants as she cheered on the athlete and clapped in the crowd. She was joined by others, including her son Saint West, 7, and niece Penelope Disick, 10, and has a long braid in her hair as she accessorized with sunglasses.

In addition to being photographed sitting down during the game, Kim was photographed leaving the location along with North, who wore her gray and black basketball uniform and black sneakers. Saint and Penelope were also slightly behind them and wore their own stylish outfits, including a black puffer coat over a black graphic tee, black shorts, and black slip-on shoes for him, and an oversized black tee and black pants for her.

Before Kim’s latest appearance at North’s game, she made headlines for dancing to “Shake It Off” by Taylor Swift, whom she had a public feud with in the past, in a video with North. The doting mom could be seen in the background as North appeared right in front of the camera, in the TikTok clip. They both wore white and black outfits, including a white hoodie for North and a white zip-up top over a black crop top and black leggings for Kim.

Another one of the mother-daughter videos to get attention recently was one in which North transformed herself into her dad, Kanye West, by using a filter of his face over hers. The clip was set to a remix of the rapper’s 2013 song “Bound 2” and the his ex-wife and daughter captioned it with, “Bound Baby.” They both wore matching black outfits, including oversized shades for Kim and a knit cap for North.

That wasn’t the first time Kim appeared in a video with “Bound 2” playing. The SKIMS founder also appeared in her former husband’s music video for the tune, which is still memorable. He was sitting on a Honda CRF-X motorcycle while she went topless and straddled him, in the feature.

All About John Miller, Jennifer Garner’s Boyfriend of 4+ Years
How Silk Is One Of The Cruelest Materials In Your Wardrobe
Italian Rockstars ‘Maneskin’ Are A New Breed of Heavy Metal, Taking Charge with ‘Gossip’
Dave Chappelle Talks About Backlash Over Anti-Trans Remarks
Michael B. Jordan Jokes About Joining Dating App Raya On ‘SNL’ After Lori Harvey Split: Watch