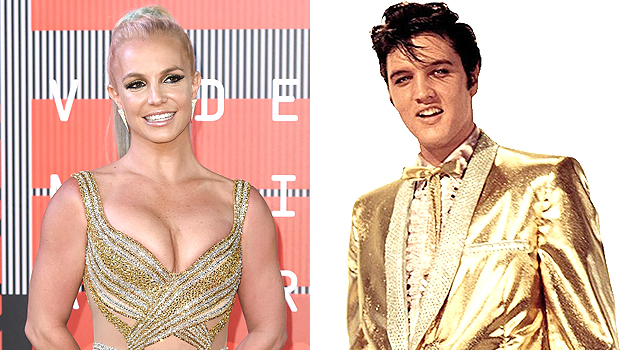 As expected, “Toxic Las Vegas” takes parts of Elvis’s 1964 song, “Viva Las Vegas,” and Britney’s 2004 single, “Toxic.” The song is a bonafide club banger, with Elvis leading the first verse singing over Britney’s unforgettable beat. “Bright light city, bright light city, gonna set my soul on fire,” he croons. “Got a whole lotta money that’s ready to burn…there’s a thousand pretty women,” he then sings before singing, “Viva Las Vegas.” Spliced vocals of Britney’s “can’t calm down” lyric from “Toxic” then cut in as Elvis continues over the beat for a memorable and infectious track.

Released as the second cut from Britney’s 2003 album, In The Zone, “Toxic” gave Britney her first Grammy, as it took home the Best Dance Recording at the 47th Annual Grammy Awards in 2005. It peaked at No. 9 on the Billboard Hot 100 while topping the charts across the world. “Viva Las Vegas” peaked at No. 29 on the Billboard Hot 100, and he reportedly never sang the song live. Although the tunes like an unexpected mash-up, they flow seamlessly together in the catchy mash-up.

Like Elvis, Britney has spent considerable time in Sin City. Britney famously wore a white, rhinestone-covered jumpsuit as part of the advertising campaign for her 2001 HBO special, Britney Spears Live From Las Vegas. The look was immortalized in a doll form, now commanding a high price on the second-hand market. Britney also completed a four-year Vegas residency at the Planet Hollywood Resort & Casino. She was set to kick off her second residency at Park MGM’s Park Theatre in 2019, but her father’s health issues forced her to cancel the event.

“Toxic Las Vegas” marks Britney’s first single since she teamed with Elton John for “Hold Me Closer,” a duet that combined elements of Elton’s “Tiny Dancer,” “The One,” and “Don’t Go Breaking My Heart.” The team-up was Britney’s first new song since she ended her conservatorship, leading some to hope that a bigger comeback was in the works.

The release of this remix – put together by Jamieson Shaw, the music producer/editor for Baz Luhrmann’s ELVIS – coincides with the celebration of Elvis’s birthday. Warner Bros. Pictures and Presley’s estate, Graceland, are offering fans in Memphis opportunities to celebrate the King’s birthday with a movie marathon, a Birthday Pop concert, a proclamation ceremony, and more ( Information on all events can be found at Graceland.com.)

Britney Spears & Justin Timberlake’s Dating Timeline: From The ‘Mickey Mouse Club’ To Their Breakup & Through Today

In addition to the Graceland events, Warner Bros. Pictures will hold free screenings of Luhrmann’s ELVIS in ten cities across the U.S. and Canada. Tickets will be available at no cost to moviegoers on a first come, first served basis here, for Atlanta, Chicago, Dallas, Kansas City, Los Angeles, New York, San Francisco, Toronto, and Vancouver.

Those who can’t make it can watch ELVIS on HBO and HBO Max. HBO Max will also debut Just a Boy from Tupelo: Bringing Elvis to the Big Screen. SiriusXM to rebroadcast ELVIS Cast Town Hall on 1/6/23 through 1/8/23 with Baz Luhrmann, Austin Butler, Tom Hanks, and Olivia DeJonge on Elvis Radio (ch. 75), moderated by SiriusXM host Jess Cagle. And there’s now “Toxic Las Vegas” to put on your Presley Playlist.