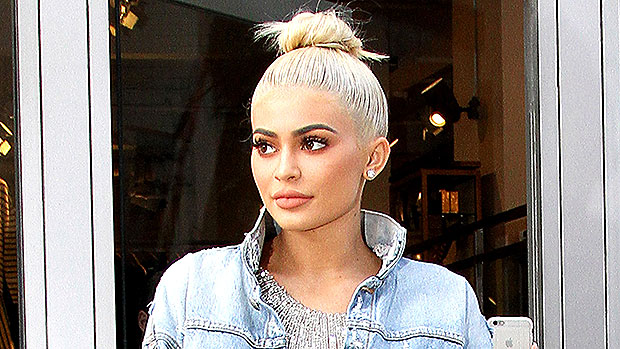 If anyone knows how to do a makeover reveal, it’s the KarJenners! Kylie Cosmetics founder Kylie Jenner, 25, took to Instagram on Jan. 4 and debuted her on-trend bleached eyebrows look! “where we going ?”, she captioned the carousel of photos in the backseat of her car. The stunning mom-of-two rocked a monochromatic look that featured a black denim bustier and denim pants. The 25-year-old opted to wear her raven-hued tresses in a chic updo that allowed some stray pieces to frame her face effortlessly.

It was only a matter of time until The Kardashians star’s 377 million followers flooded the comments section with reactions to her new look. “ugh finally !!!!”, one admirer said in regards to King Kylie joining the eyebrow trend, while another added, “Gorgggggg [sic].” Of course, Kylie’s makeup artist and close friend, Ariel Tejada, commented his thoughts on his creation. “We ate,” he wrote, along with several flame emojis. Ariel also took to his own Instagram account to share the look and captioned the photo of the star, “Take me wherever you go!”

Despite many people raving over the brunette bombshell’s new eyebrows, not all of her fans were pleased. “Are you serious kylie …..,” one follower wrote, while a separate fan penned, “The no eyebrow look is not a good [email protected] [sic] anyone.” Even some of the former billionaire’s fans added reactions that responded to her question in the caption. “To dye our eyebrows back to normal,” one hater commented. Finally, a fourth follower agreed with the second and added, “No bleach eyebrows anymore for anyone, pls.”

The TV personality and makeup maven’s jaw-dropping look comes just two days after she was gallivanting around Aspen with her daughter, Stormi, 4, on Jan. 2. The mother-and-daughter duo took to TikTok to share a video of them playing in the snow-filled mountains and even snow tubing! “we’re on a serious adventure right now — so beautiful!”, Kylie could be heard saying at the start of the clip. She captioned the post with, “2023,” along with a black heart. For the day of adventure, Kylie rocked a black puffer coat, black winter pants, and snow boots. Her mini-me, for her part, opted for a similar look with a black puffer jacket, black pants, and snow boots to match her momma.

Kylie is also not the only member of her family to recently debut a new look, as her older sister, Kim Kardashian, 42, returned to her brunette tresses over the Christmas holiday. The mom-of-four took to Instagram on Jan. 2 to post her first selfie rocking the new look. Other members of the KarJenner family have also been spotted in Aspen with Kylie, including model Kendall Jenner, 27, who rocked a red dress on Dec. 29. When Kylie is not busy posting amazing glam looks, she’s often busy raising her two kiddos. The businesswoman shares two kids: Stormi and an 11-month-old son (whose name is not known) with rapper Travis Scott, 31.