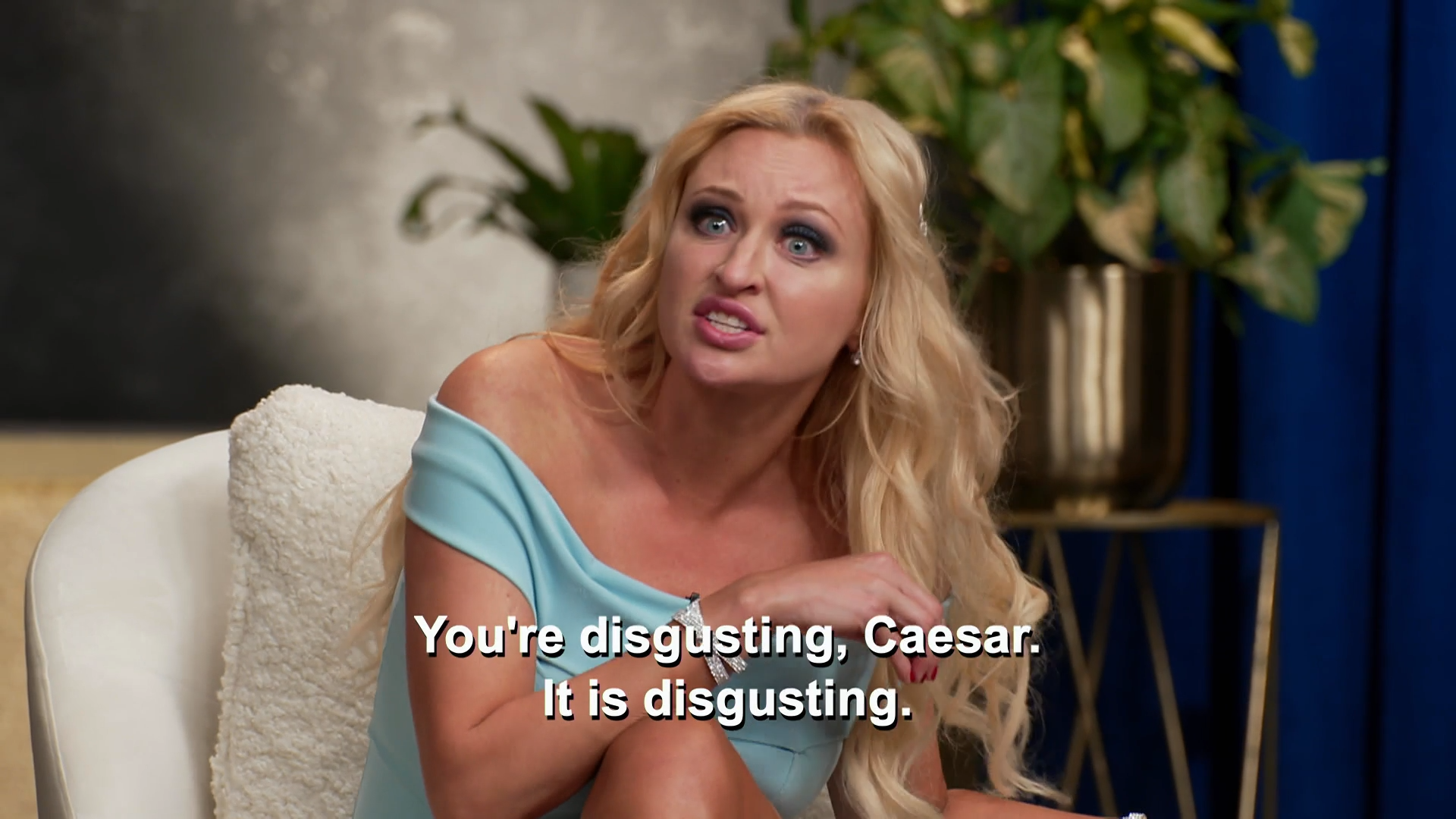 During the 90 Day: The Single Life Season 3 Tell All special Part 2, so much went down.

When Caesar Mack shared his throuple goals with a pair of Ukrainian women — he received some backlash.

Natalie was the most outspoken and least nuanced, telling Caesar to “go to hell” and refusing to speak to him.

That was a bit weird, even for Natalie. But fans think that it’s especially odd considering her refusal to “choose” between Josh and Mike.

Though he was far from the only person with big relationship news, Caesar Mack revealed that he and Alona are no longer together.

Meanwhile, multiple cast members raked Caesar across the coals for his fixation on Ukrainian women. He clearly fetishizes this specific demographic. It’s dehumanizing and creepy, even if he doesn’t mean anything by it.

Veronica told Caesar that it felt like he wanted to “buy” a wife … on a nail technician’s salary, no less.

Caesar did not make matters any better when he said that he wanted to bring a woman to the US rather than meet one who is already here.

Tim Malcolm’s line about wanting them before they’re “westernized” did not go over well, nor should it. He walked it back a little by explaining that he feels “exotic” in other countries, but still. Not helping. Not helping himself or Caesar.

Natalie offered her counterpoint to Caesar’s use of a matchmaker: going to a “Russian Ukrainian church” to find a bride.

It’s no surprise that she specifically would recommend church attendance to solve Caesar’s problems. But is it good advice?

Because, in our book, infiltrating a house of worship to hunt for a bride is wayyy less ethical than matchmaking.

Tiffany and Tania both quickly chimed in to remind Caesar that, unlucky in the past or not, he has good looks and a great personality.

For a middle-aged man to receive compliments from these two certified hotties … that can be eye-opening.

But it may have come a little too late for the moment. Caesar doesn’t need fresh encouragement. Because he has already moved on from Alona.

Caesar revealed on the Tell All stage that he now has two girlfriends: Stella and Katrina. Yes, they are Ukrainian.

They are both planning to come to the United States. They have their visas (they are obviously refugees).

Both have told him that they love him and want to be with him. He’s not two-timing them. The three will live together, Caesar shares.

Natalie immediately began giving Caesar the stinkeye. He hasn’t really said anything “offensive” yet, so this is important to note.

It’s possible that her issues are still with his fixation on Ukrainian women. But we really get the vibe that she’s judging him for a polyamorous relationship. That sounds pretty bigoted. At best, ignorant.

Meanwhile, cast members expressed concern for Caesar. Are these women deceiving him? Debbie said that they must be scamming him. Caesar claimed that he’s not giving them any money.

Of course, he will have to support them both (along with himself) on a nail technician’s salary.

Caesar shared that they would arrive in the United States “next month” (which was likely months ago, given when they filmed the Tell All).

At that point, they will live together as a family. Caesar shared that they plan to all have children and raise them together. If the women are genuine, that sounds great!

Caesar gushed about the future that these women can have. They can go to school (NC does have a world-class university system) and, of course, live without fear of Russian invasion.

But when castmates asked what he’s offering these women, he noted that he treats them better than what they have experienced in Ukraine.

He may have been speaking of Stella and Katrina’s specific exes. But Natalie believed that he was referring to how all men in Ukraine treat women.

“You’re insulting my country right now!” Natalie furiously accused. She told him to “go to hell.”

It’s possible that Caesar believes some (self-serving) stereotypes about Ukrainian men. But even if so, many struggled to understand Natalie’s reaction.

In fact, it really seemed like there was more going on than an ardent defense of her homeland.

“I think they don’t exist!” Natalie then accused, seemingly referring to Stella and Katrina.

Doubting their motives is one thing. Accusing Caesar of fabricating these women for the Tell All is on another level.

Natalie then continued to double down, claiming that people were constantly attacking her homeland. What?

Tania had to call out Natalie, urging her to calm down. No one — other than Vladimir Putin — was attacking Ukraine.

For example, he mentioned that the bed in his two-bedroom home is large enough to share with both Stella and Katrina.

That set off Natalie again. This time, there was no pretense that she was defending her homeland. She called him “disgusting.”

“They might be good and honest people! Don’t do this to them!” Natalie screeched.

She did not explain what he is doing to them. One can only conclude that she was shaming Caesar for his polyamorous relationship goals. That’s not okay.

There is some nuance. Veronica noted that Caesar might not be acknowledging the power dynamic at play. Debbie argued that these women are trying to use Caesar.

Tania chimed in to note that Caesar isn’t the one providing these women with visas (he couldn’t even if he wanted to). They already have them.

So there is less for these women to “scam” out of Caesar, and he has less potential power with which to “exploit” them.

So Tania supports the throuple goals even if she’s unsure of the women’s motives.

Meanwhile, Natalie and Debbie had opposite views of these women, but seemed uncomfortable with Caesar being in a throuple.

Debbie is 70, which might explain but not excuse her hangups. What is Natalie’s deal, exactly?

Natalie very clearly felt disgust over Caesar, and it’s not sitting well with fans of the show.

But two, she’s being a huge hypocrite. Just look at what she’s been pulling with Mike Youngquist and Josh Weinstein.

In fact, this is the very same Tell All (all parts of the Tell All film on the same long, long day) where she stormed off stage.

Why? Because her cast mates were telling her that she needs to choose between Mike and Josh, giving one man her whole heart.

She wants to have her cake and eat it too. And anyone telling her otherwise fills her with anger and tears.

Meanwhile, Caesar just wants two slices of cake. And Stella and Katrina are apparently both on board.

Notably, neither Mike nor Josh signed up for this. So Natalie is playing two guys against each other while refusing to choose.

She has a lot of gall trying to shame Caesar for his consenting adult relationship when she’s the one wasting the time of one, if not two, different men.

Julia Louis-Dreyfus Reveals How She Reacted to Son Charlie Hall’s Sex Scenes on ‘Sex Lives of College Girls’
Not a Single Woman Was Nominated For Best Director at the 2023 Oscars
All About Cara Delevingne’s Girlfriend, Minke
Not Hungry In The Morning? It Could Be A Sign Of Stress
Paris Hilton welcomes 1st baby in adorable Instagram post