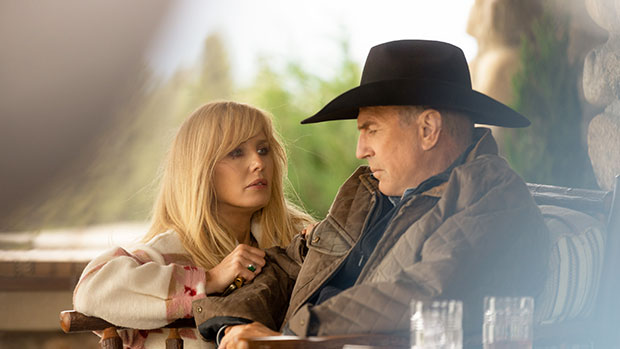 Episode 5 of Yellowstone season 5 begins with another flashback. John is about to head out with Rip and Rowdy. Beth walks up and Rowdy shoots his shot by asking for a kiss. Beth struts passed Rowdy straight to Rip. She tells Rip to be careful. “See you when you get back,” Beth says. Rip quips, “I ain’t hard to find.”

In the present day, Beth is still obsessing over the past. “Do you ever think about us?” Beth asks Rip. He replies, “Us is all I think about.” She’s talking about when they were kids. “I think about now. I think about tomorrow, but I don’t give much thought to yesterday,” Rip says. Beth admits that “yesterday is what eats me.”

Beth confronts her father about giving Summer clemency. John explains that he only commuted Summer’s sentence, and she’s under house arrest for the rest of it. He thinks that he’ll be able to use Summer when it comes to understanding the dead wolves situation if it gets out of hand. Beth believes this is an all-around bad idea at the end of the day.

Jamie Digs Himself A Bigger Hole

Monica discovers Kayce crying on their front porch. He admits that he’s worried about Monica, his life, and his place in this world. Monica doesn’t want Kayce to quit his job, but Kayce doesn’t want the job to come between them. Monica tells Kayce that John called and invited them to the gathering. Monica thinks this will be a good break for all of them.

Beth finds Rip trying to get everything together for the gathering. She starts to ponder about going herself. Rip doesn’t think she’s serious because it’s 2 days on horseback and the definition of non-luxury. Beth gets defensive, and she waits for Rip to ask her to go.

Jamie keeps finding ways to get himself in trouble. Sarah shows up at his office. He says that what happened between them was unprofessional. Sarah calls out Jamie about backing out of whatever’s going on between them. Jamie clearly thinks Sarah has ulterior motives since having a relationship with her would recuse him from representing the state against Market Equities.

‘1923’ Updates: The New Trailer, Premiere Date & More You Need To Know About The ‘Yellowstone’ Prequel

Jamie points out that the state hires outside counsel for litigation, so if that’s her plan, she failed. Jamie (and the rest of us) aren’t quite sure what Sarah’s up to, but she’s going to make sure she gets some pleasure out of it. She shows off her sexy lingerie right there in Jamie’s government office.

The Duttons have a family dinner with John, Beth, Rip, Carter, Kayce, Tate, and Monica, along with Summer and John’s assistant. Beth doesn’t hesitate to make the dinner awkward by antagonizing Summer. Summer doesn’t help herself at all, and she interrogates Gator about the meat he’s serving. At one point, Monica starts laughing because the whole situation is so awkward.

Beth asks Summer to step outside. Right away, she slaps Summer hard. Summer fights back and calls Beth a “smug, spoiled, 40-year-old adolescent.” They get into a brutal, knockdown, drag-out fight on the lawn. John thinks it’s time they got this out of their system.

“Nothing gets out of your daughter’s system, sir,” Rip notes. He gets up to go check on Beth and Summer outside. The fight is still going strong. Rip berates them for acting stupid. “Do you think you’re going to beat the other one into respecting your opinion?” he asks them. He also asks Beth if these are really the kind of manners he wants to be teaching Carter.

Rip doesn’t let Summer off easy, either. He tells her to “shut the f**k up and say thank you” or leave. He stresses that they both have to figure out a way to get along. The thing is, they both don’t want to quit. Rip forces them to go old school, punch for punch. They keep throwing punches until Summer starts crying. They call a truce, and Beth then helps her up.

“This is my f**king house. You will show me and everyone in it respect,” Beth tells Summer. Summer claps back, “What respect do I get?” Beth responds, “You get exactly what you give.” As they head back to the house, Summer thinks they should both get cleaned up. Beth doesn’t hide from what she does. “Let them look,” she says.

But not everyone feels the same way. Once everyone’s back at the dinner table, John excuses everyone because he can’t stand to look at them. While finishing up her dinner, Beth pulls out a tooth.

John Opens Up About His Kids

John and Rip talk after the brutal catfight between Beth and Summer. John thinks that Beth’s only getting wilder as she gets older. “What it must feel like to be that free,” John says. He tells Rip that he has one child that he misses (Lee), one child he pities (Kayce), and one that he regrets (Jamie). “But that girl, that child I envy,” John says.

Early the next morning, Summer admits that she doesn’t know what to do while John is gone. Beth advises Summer to take a walk around the ranch. It might help her understand the Duttons better. Monica says goodbye to Kayce and Tate, telling Kayce to “take care” of their boy since he’s the only one they have. “Yeah, we’re gonna fix that,” Kayce tells Monica.

John leads the way for the gathering. Monica cries watching them go. “If it doesn’t make you cry to watch your family ride away, probably shouldn’t have one,” Monica says to Summer through tears.

Matt Hancock Was Paid $400,000 To Appear On ‘I’m A Celebrity… Get Me Out Of Here!’
The Best New Book Titles, According to Goodreads
Amy Robach and T.J. Holmes: Will They Be Fired? Split Up? Or What?!?
Gisele Bundchen, Jiu-Jitsu Instructor Joaquim Valente Ride Horses Together In Costa Rica
Justin Bieber sells entire music back catalogue to Hipgnosis