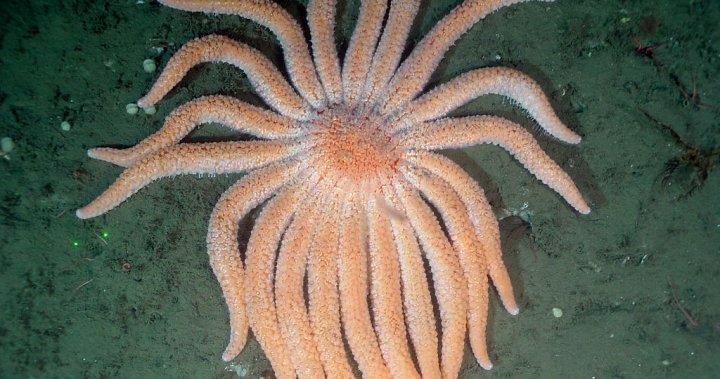 Scientists along the West Coast are calling for action to help sunflower sea stars, among the largest sea stars in the world, recover from catastrophic population declines.

Experts say a sea star wasting disease epidemic that began in 2013 has decimated about 95% of the population from the Aleutian Islands of Alaska to Mexico’s Baja California peninsula, The Astorian reported.

The decline triggered the International Union for Conservation of Nature to classify the species as critically endangered in 2020. A petition to list the species under the federal Endangered Species Act was filed in 2021.

Steven Rumrill, shellfish program leader at the Oregon Department of Fish and Wildlife, said in his more than 40 years as a marine scientist, he hasn’t seen a widespread decline of a species on the same scale as the sunflower sea star.

The sea stars, which are among the largest in the world and can span more than 3 feet (91 centimeters), are predators to the kelp-eating sea urchin. Without them, sea urchin populations have exploded, causing a troubling decline in kelp forests that provide food and shelter to many aquatic species along the West Coast.

Rumrill contributed to a recently published roadmap to recovery for the sea star as a guide for scientists and conservationists.

1:53
An SFU study hopes to shed new light on why so many sea stars are dying


“It just sort of breaks your heart to see a species decline so rapidly to the point of extinction,” Rumrill said. “At the global scale, we’re recognizing that the impacts of humans have had major impacts on populations and lots of extinctions worldwide. Here’s one that’s happening right in front of our eyes.”

The roadmap was completed in collaboration with The Nature Conservancy, National Marine Fisheries Service, and state agencies in California, Oregon, Washington and Alaska.

The sea star wasting disease is estimated to have killed over 5.75 billion sunflower sea stars, according to the document.

The source of the outbreak has not been conclusively identified, but the document points to evidence that warming ocean waters from human-caused climate change increases the severity of the disease and could have triggered the outbreak.

Rumrill said listing through the Endangered Species Act could result in federal funding to continue research.

Matthew Burks, a spokesman for the National Marine Fisheries Service, said whether the agency recommends the sea star be listed under the Endangered Species Act will be posted to the Federal Register by early next year.

While sunflower sea stars appear to be the most affected by the sea star wasting disease, they are among about 20 documented species of sea stars at risk along the West Coast.

Breaking Up With Your Therapist? Here’s Exactly How to Do It
Michael Peña Wishes Jeremy Renner Well After Heroic Snowplow Accident
Chrisean Rock Buys Wedding Dress, Says She’s Getting Married Tomorrow
Interview: Tess Sharpe Talks Fanfic & Mental Health Awareness in ‘6 Times We Almost Kissed (And One Time We Did)’
Kanye West Takes Wife Shopping at Balenciaga Despite Brand Dropping Him