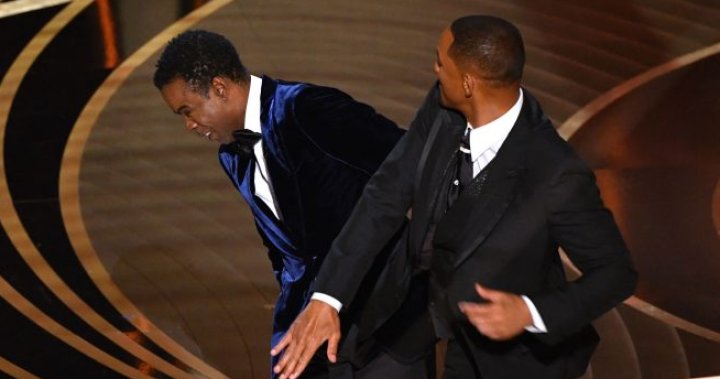 In his first late-night talk show appearance since “the slap heard around the world,” Will Smith addressed his assault against comedian Chris Rock at the 94th Academy Awards in March.

While a guest on Monday’s episode of The Daily Show with Trevor Noah, Smith, 54, described the Oscars as a “horrific night.”

“There’s many nuances and complexities to it. But at the end of the day, I just — I lost it,” Smith said in the emotional interview.

During the Oscars ceremony in March, Rock, 57, made a G.I. Jane joke about Smith’s wife, Jada Pinkett Smith, who suffers from the skin condition alopecia, which causes hair loss. Smith walked onto the stage from his front-row seat and took a swing at Rock with an open palm, generating a loud smack. Smith returned to his seat and shouted for Rock to “Keep my wife’s name out of your f–-ing mouth!”


That same night, Smith went on to win the best actor award for his role in King Richard.

Smith later apologized for slapping Rock. He was banned from the Academy Awards for 10 years.

On The Daily Show, Smith said he was “going through something that night.” The actor did not specify what this was but clarified that it did not justify his actions.

“I guess what I would say is that you just never know what somebody’s going through,” he said.

Still, Smith sympathized with the international upset caused by the televised slap.

“I understand how shocking that was for people,” he said. “I was gone. That was a rage that had been bottled for a really long time.”

Smith also claimed that witnessing domestic violence during his childhood contributed to the attack against Rock.

“It was a lot of things; it was the little boy that watched his father beat up his mother. All of that just bubbled up in that moment,” he said. “That’s not who I want to be.”

In March, shortly before the Oscars, Smith spoke to Gayle King about the alleged domestic abuse. At the time, he claimed that his “suffering” made him into the person he is today.

“My suffering helped me to become who I am.”

Global superstar Will Smith, nominated for an Oscar for his performance in “King Richard,” sits down with “@CBSMornings” co-host @GayleKing to talk about his inspiring life’s journey – from suffering to success pic.twitter.com/OKhvuyB9dq

Smith also released his memoir Will in 2021, which outlined his attempts to accept the alleged domestic violence in his past, including his own self-admitted desire to murder his late father.

Though he remains barred from the Academy Awards, Smith is already in talks as a potential best actor nominee next year for his upcoming portrayal of a real-life enslaved man known as “Whipped Peter” in the drama Emancipation. Widely circulated photos of Peter’s scarred back helped to fuel abolitionist support during the Civil War.

Though Smith told Noah it was “killing me dead” that people may veto Emancipation as a result of his behaviour at the Oscars, Smith also said he “completely understands.”

Next year’s Academy Awards are slated to take place in March and will be hosted by Jimmy Kimmel.

Trevor Noah Introduces Adele to The Rock During Grammys Opening
Gothic black French nails are trending as the emo alternative to Vanilla Girl manicures
How Lil Yachty Ended Up at His Excellent New Psychedelic Album ‘Let’s Start Here’
You Can Now Relive BTS’s “Yet to Come” in Busan Concert Set List in Theaters
James Gunn Unveils His New DCU Slate With Reboots of Superman, Batman, Green Lantern and More