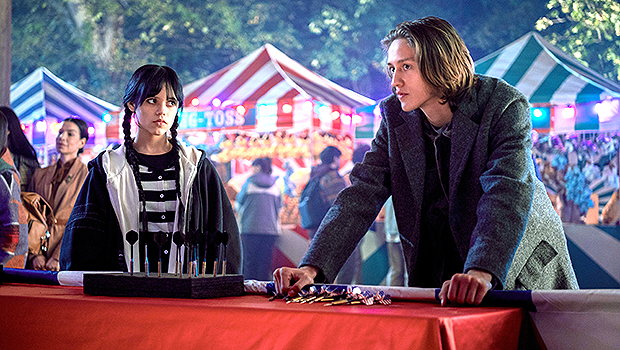 Everyone is going to know Percy Hynes White after Wednesday debuts on November 23. The 21-year-old actor stars as Xavier Thorpe in the Netflix series. Percy had his first breakout moment as a kid in The Gifted, and now he’s ready for the next chapter.

If you need a refresher on all things Percy, HollywoodLife has you covered. To scoop about his Wednesday character to his early days of acting, here’s everything you need to know.

1. Percy stars as Xavier in Wednesday.

Percy’s character is Xavier Thorpe, and he’s one of Wednesday Addams’ classmates at Nevermore Academy. “Xavier is the son of a famous psychic in the world of Wednesday,” Percy told The Toronto Star. “And so he comes from this very rich family. And he’s kind of a gifted painter. And he himself is psychic and he’s able to bring his paintings to life … He sort of has this entitlement and he’s used to people wanting to be his friend. And so when he kind of gets rejected by her, I think it piques his interest … He chases after her a little bit and also becomes an object of suspicion in the show.”

Percy rose to fame playing Andy Strucker in the FOX series The Gifted. He starred alongside Stephen Moyer, Amy Acker, and Natalie Alyn Lind. The show ran for 3 seasons.

Wednesday shot for months in Romania. “It was definitely a unique life experience because I don’t think I would have ever gone there otherwise … so I’m very happy that I got to go,” he told The Toronto Star. Percy had a blast filming with his castmates away from home. “It was like working on a huge blockbuster movie, and you’re with all of your friends and you’re just having a ball,” the actor added.

4. Percy is from Canada.

Percy hails from St. Johns, Newfoundland and Labrador, Canada. He’s the son of Joel Thomas Hynes, a novelist, actor, director, and more. Percy’s mom is Sherry White, an actress who has appeared in shows like Rookie Blue and Saving Hope.

Back in September 2022, Percy posted on Instagram that he recently wrapped a movie with director Megan Park. Megan replied to his post, “Omg stoppppppp percyyyyyyyy.” Megan has a connection to both Percy and his co-star Jenna Ortega. Megan directed Jenna in the critically-acclaimed film The Fallout.