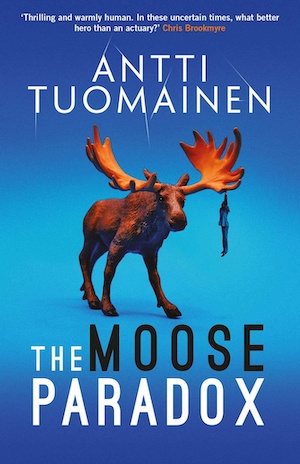 If you read The Rabbit Factor by Antti Tuomainen, not only did you meet the mathematician Henri Koskinen but you will have enjoyed one of the finest and most original crime novels of 2021. Quirky characters, perilous run-ins with violent gangsters, a disorientating setting, absurdist humour and a thread of romance – it felt like the perfect formula… and the perfect antidote to lockdown blues.

The same formula returns in The Moose Paradox, the sequel to The Rabbit Factor. Henri, once an insurance actuary, is now running the Helsinki adventure park, YouMeFun. Keeping Finnish children and their parents entertained in a world of PlayStations and rival parks is a tough business and Henri needs a new attraction. The Moose Shute, he calculates, will ensure he can keep the park in the black.

But the master puppeteer Antti Tuomainen has other plans for our unlikely anti-hero, who has Asperger’s syndrome or something similar. One night, out by the loading bay, Henri is attacked. Just like in the first book, it seems a criminal faction wants him out of the way. A struggle ensues and the assailant ends up dead – killed when his head gets stuck in a giant plastic strawberry. When the attacker’s body is eventually discovered, Henri once again has to deal with Detective Inspector Pentti Osmala of the local murder squad.

Henri is being blackmailed by Toy of Finland, the only company that can supply him with the sought-after Moose Shute. Not only are they overcharging him for goods he doesn’t need, they won’t provide the Moose Shute. The company is now owned by three gangsters who are threatening him physically and, claiming they know what Henri did in the previous book, say they’ll call Osmala.

On top of all this, an asset stripper wants to buy the park. Henri doesn’t want to sell and doesn’t want the quirky team of employees to lose their jobs. He knows it will close if the buyer takes over. There’s conflict on three fronts. He has a powerful analytical mind, but can it extricate him from this predicament?

Lightening the tension is Henri’s blossoming relationship with the artist Laura Helanto, with whom he fell in love in The Rabbit Factor. She finds his neurological differences intriguing and his steadfast truthfulness sets him apart from other men, in her eyes. Meanwhile, her creativity introduces him to sides of his psyche he never knew existed. DI Osmala happens to be a fan of the new artwork Laura is creating at the park, which means he’s orbiting both of them like a bad moon.

If there’s a flaw to The Moose Paradox it’s that the plot is a little too similar to The Rabbit Factor. That’s the danger of returning to a formula. Essentially it’s Henri against ruthless, organised criminals from the Helsinki underworld. He does what he must to survive with an annoying detective constantly sniffing around, threatening his – and our – sense of justice. This time, though, the bad guys don’t present quite the same level of menace and danger. We also know that Henri can defend himself so it all feels a bit safe.

Like its prequel, The Moose Paradox is dripping with irony and is elegantly written. It is delightful to see the world from Henri’s perspective, which enables author Antti Tuomainen is able to satirise all sorts of situations and deconstruct a wide range of assumptions we all have about everyday life. Henri’s stressful narrative is broken up by things like his unusual philosophy on public transport, how he experiences a meal in a cafe, or the idea of moving in with Laura. Turn the page and he’s dealing with a man pointing a gun. All the while he calculates the odds. Henri will make you laugh out loud page in, page out. It’s a deeply thought out book, delivered with a light touch and there’s a twisty crime story driving the whole thing.

For some equally amusing writing, see the full short story by Joe R Lansdale on our site here.

Art Basel Miami Beach: What Does the Future Hold for the Most Raucous Week in American Arts?
7 Tips to Try If Your Eczema Makes You Feel Self-Conscious
Wednesday Addams Makeup Is Trending On TikTok – Here’s How To Do It
A Timeline of Angelina Jolie and Brad Pitt’s Ongoing Divorce Legal Battle
Repressed Lesbianism and Otherness in Val Lewton’s ‘Cat People’ [Horror Queers Podcast]