The family of I’m A Celeb star Charlene White have spoken out against viewers who branded her behaviour as “selfish”.

The ITV News presenter and Loose Women star, 42, has been refusing to sleep in the camp RV, resulting in one less bed outside for her other campmates.

This has resulted in others taking turns to give up their camp beds to sleep in a hammock. Owen Warner joked in the Bush Telegraph last night: “I feel like going to her, go on, sleep in the hammock and I bet you, in the middle of the night, she’s going to sneak up to the RV and get in that bed.

“Charlene’s like my mum in here, it’s like me putting my mum in a hammock whilst I’ve got a bed, so we’ll see.”

As deputy camp leader, Charlene is meant to be staying in the RV with camp leader Matt Hancock.

Taking to Twitter, one fan said: “She doesn’t want to upset her Loose Women mates, she’s also worried she will miss out on the gossip in camp and she’s selfish.”

Charlene’s family then used her Twitter page to write: “Of course, everyone knows gossip when you’re asleep in the dead of night is the best.”

They then responded to a tweet that read “or sleep in the RV,” by writing: “Hammock looks way more comfy tbf, Char should be slumming it, not laying in comfort.”

On an Instagram Live on Wednesday (November 16), hosts Ant and Dec spoke about Charlene not sleeping in the RV.

Ant and Dec speak about the RV situation

Ant said: “Why would she not want to sleep in there, it can’t just be because of the spider. Is it because you don’t want to sleep next to Matt? Is that it?

“You’ve got to think of the other people that have to then sleep in a hammock because of your actions and then have a bad back. Then you’ve got to look at your actions, don’t you?”

He then joked: “It is against the rules they said… well yeah, maybe. I think maybe she is and I am going to speak to the producers about it.”

“I am not sure it is playing as a team member taking up a bed, ” Dec added. 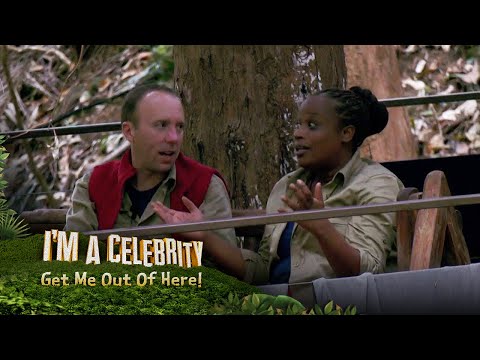 The next Bushtucker trial will see Boy George and Charlene take on the Watery Grave challenge.

George and Charlene have faced some tension in the past after the singer didn’t like how she was taking control in the cooking department.

The two have since appeared on good terms and George even thanked her for her cooking.

Drake Gives DJ Khaled A Gift That Keeps On Giving
Trespasses
Emma Corrin Calls For Gender-Neutral Awards: “I Hope For A Future In Which That Happens”
Gisele Bündchen Leaves a Supportive Comment on Tom Brady’s Post For His Son Jack
Jim Bob and Michelle Duggar Flaunt Massive Weight Loss: What’s Going On With These …