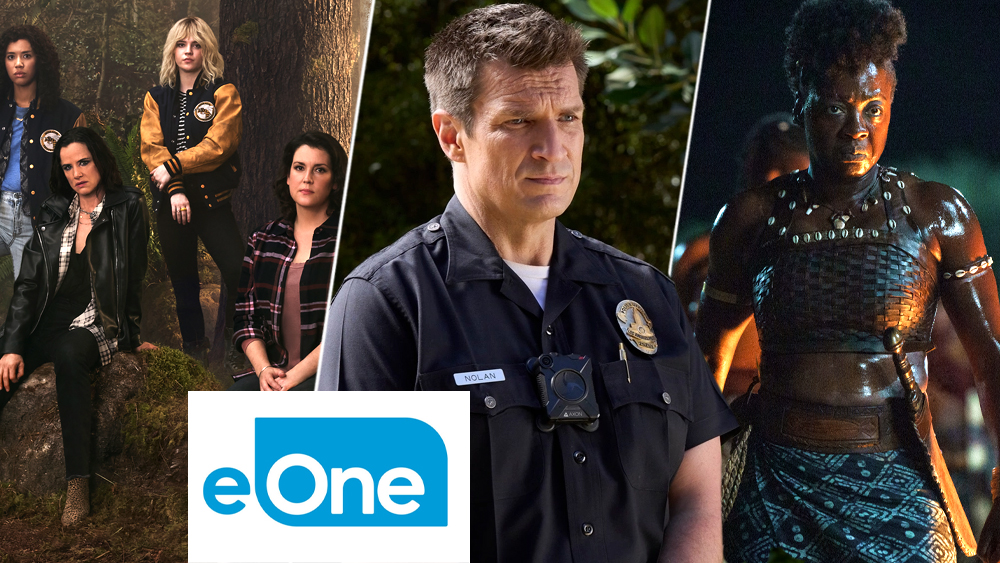 After more than a year and a half of development, eOne recently started shopping its Dungeons & Dragons live-action TV series. Shepherded by Red Notice filmmaker Rawson Marshall Thurber, it is based on Hasbro’s wildly popular fantasy role-playing game franchise.

The series was conceived as eOne’s priciest, largest-scope projects ever, a drama that would demonstrate the full potential of Hasbro’s 2019 acquisition of the indie film and TV studio. It started garnering bids and all seemed to be going according to plan — until the process was interrupted yesterday by the toymaker’s announcement that it plans to sell eOne’s film and TV businesses.

While Hasbro has been preparing for a potential sale of most of eOne’s assets for quite a while, working with J.P. Morgan and Centerview Partners, the timing of the latest news is raising eyebrows. M&A activity has become complicated by economic conditions of late, with rising interest rates frustrating some dealmakers since many acquisitions depend on loans and money has become significantly more expensive to borrow. Additionally, the sales process is officially launching a week before Thanksgiving, bringing anxiety over job security for eOne staffers as they head into the holiday season at end of the year.

What exactly is for sale?

Prior to eOne’s 2019 acquisition by Hasbro for $4B, the company was divided into three divisions: Music; Family Brands, which included such staples as Peppa Pig and PJ Masks, as well as all licensing merchandising-related products; and Film and TV.

Hasbro has since sold eOne’s music business to private equity firm Blackstone last year for $385 million. The family brands business has been rolled into Hasbro’s brands licensing and merchandising operation.

What is left — and is now looking for a buyer — is all non-Hasbro branded scripted and unscripted TV production and all film production and related global distribution, as well as a 6,500+ title content library and Hasbro’s interest in eOne’s Canadian film and TV business.

While eOne traditionally has been known as distributor of third-party content, like The Walking Dead and the Lionsgate library in Canada, the indie studio has built up its film and TV production business over the past decade. Its library does generate cash too but the majority of the almost $1B in revenue the assets for sales generated last year came from current TV series and movies, including The Rookie franchise, Yellowjackets, Cruel Summer, Naked and Afraid and the upcoming The Recruit and A Gentleman In Moscow, recent feature hits The Woman King and Mrs. Harris Goes to Paris as well as Freaky Tales, now in production.

The film and TV division has grown its revenues every year and has had a sizable positive EBITDA for at least a decade. Yet, it is being put on the auction block three years after it was acquired by Hasbro.

The move is part of a plan to reduce costs by as much as $300 million. Hit hard by inflation, which is suppressing consumer demand for discretionary purchases like toys and games, Hasbro has promised investors to focus on “fewer, bigger, more profitable brands.”

But there are deeper reasons for the asset sale, which ends late Hasbro President and CEO Brian Goldner’s decade-long pursuit of expanding the company beyond toys and games and turning it into a TV and film powerhouse.

Goldner had been the main force behind the embrace of Hollywood by the Pawtucket, RI-based Hasbro, which for years had been satisfied to merely license movie and TV properties and make toys out of them. Instead, Goldner brought a vision with him when he joined the company as a fast-rising exec in his 30s. He was determined to show the entertainment industry that it was sitting on properties no less valuable than those in the Marvel or DC. Early film efforts like Transformers and G.I. Joe were hits and the company would go on to set lucrative streaming deals with Netflix and other distributors. But Hasbro still lacked infrastructure and access to talent, so Goldner focused his attention on acquiring an indie studio. (There was also the 2009 cable TV detour with the short-lived Hub channel, a joint venture with Discovery Communications. Hasbro plunked down $300 million for a 50% stake and $200M for production but, after a rocky start, the channel was rebranded again in 2014 as Discovery Family, with its programming focus broadening and Hasbro’s stake decreasing to 40%.)

After talks with DreamWorks Animation and Lionsgate fell through, Hasbro in 2019 acquired eOne. Goldner said at the time that the two businesses were “highly complementary with substantial synergies and a great cultural fit” and that through the deal, Hasbro was “adding proven TV and film expertise, and creating additional opportunities for long-term profitable growth.”

He set the merged company on that path with the eOne divisions starting to build a slate of new Hasbro and non-Hasbro film and TV projects. Then in October 2021, Goldner died of prostate cancer at the age of 58.

He was replaced by Christopher Cocks, who had previously been head of the company’s Wizards of the Coast division, home to fantasy gaming brands like Dungeons & Dragons and Magic: The Gathering. With Cocks at the controls, Hasbro announced last August that eOne’s longtime chief, Darren Throop, would leave his post by the end of the year.

According to sources, Cocks “from Day 1 had a very different, almost antagonistic approach to entertainment” and doesn’t like the and margins of film and TV production that are not set like putting a wholesale price on a toy, for example, and could fluctuate. “He does not believe in Brian’s vision,” one person said, “or have interest in anything that doesn’t sell toys directly.” There has been a lot of pressure on reducing investment in non-Hasbro content since Goldner’s death, sources said. Instead of non-IP film and TV production, Cocks has said in interviews that he plans to go into video games, a business that also is marked with volatility.

How would the split work?

This is not a clean-cut divorce since Hasbro signaled yesterday that it plans to maintain the capability to develop and produce animation, digital shorts, scripted TV and theatrical films for audiences related to core Hasbro IP.

According to sources, there is no clarity on how that would work, with the eOne team deeply involved in Hasbro IP through a slew of projects in development, including live-action film Transformers: Rise of the Beasts, animated Transformers film, a Play-Doh animated movie, Power Rangers film and TV series, the Dungeons & Dragons scripted series, as well as game shows and competition formats based on board games and toys Guess Who?, Mouse Trap and Monopoly, Easy Bake Oven and Play-Doh. That would make the two hard to detangle. There was no mention in yesterday’s announcement whether any eOne executives would stay behind to work on Hasbro IP-driven projects, and people connected with the deliberations say there are no ongoing talks for that.

Hasbro is not expected to spend nearly as much as eOne on film and TV and build an infrastructure, including development, production and post-production units and business affairs operations.

Word is that eOne would continue to develop and produce unscripted series based on Hasbro IP and that there is a scenario where that could also be done on the scripted side for ongoing projects after the film and TV division finds a new home, sources said.

Having so many film and TV projects in active development or production with multiple network partners, that may be the only viable option since they all need to keep going and Hasbro’s advanced sales process does not allow enough time to come up with an alternative.

In an encouraging sign, Cocks reportedly sent an internal note yesterday that was well-received by eOne staff. In it, he reportedly revealed a desire to find a buyer that Hasbro would stay in business with because the company believes that eOne’s film and TV teams are so deeply immersed in and passionate about the Hasbro IP that it would be a shame to lose that.

Despite the fact that the assets for sale do not include one of eOne’s most prized possessions, Peppa Pig, Hasbro yesterday said that it had already received multiple inbound offers.

Even in today’s tough economic environment, dominated by recession fears, some deep-pocketed buyers remain on the hunt for blue-chip libraries and companies with production capabilities to satisfy streaming demand. “There’s still a good amount of private equity money out there for the right kind of properties,” one dealmaker said.

One analyst who has tracked Hasbro’s entertainment adventures in recent years, Eric Handler of MKM Partners, believes the company’s management team has plenty of options. “There’s no gun to their head,” he told Deadline in an interview. “If they can’t get an attractive price, they don’t need to do a deal to address issues on their balance sheet.” Rather, the idea is to create a more cohesive group of assets. While Handler liked the eOne deal when it first came together, over time the reality set in that film or TV projects like The Woman King or Yellowjackets — however successful on their own terms — “couldn’t be put through the company’s full flywheel” of consumer products and other brand extensions, he said.

Investors also cheered the news of the potential sale, boosting Hasbro shares 4% to a $58.42 finish Thursday. It was a rare positive session, however, as they have lost more than 40% of their value in 2022 to date.

Sources expect Hasbro to make its presentations to buyers in December or early January and make a selection by the end of first quarter next year, around the time when the Dungeons & Dragons: Honor Among Thieves movie will premiere in March. eOne co-produced and co-financed the movie with Paramount and will release it in UK, with some distribution rights in Canada, in one of the indie studio’s biggest film efforts ever.

The studio’s TV team similarly worked very hard on the Dungeons & Dragons TV series, whose sale is now being caught up in eOne’s sale.

Industry sources appear optimistic about both.

“I think buyers will still want Dungeons & Dragons because the brand is important, the script is good, and Rawson Marshall Thurber is an exciting piece of talent,” one person said.

Added another about the potential company sale, “I think this is great news for eOne because it allows it to find a new owner who has a shared vision and is looking to grow the studio on all fronts.”