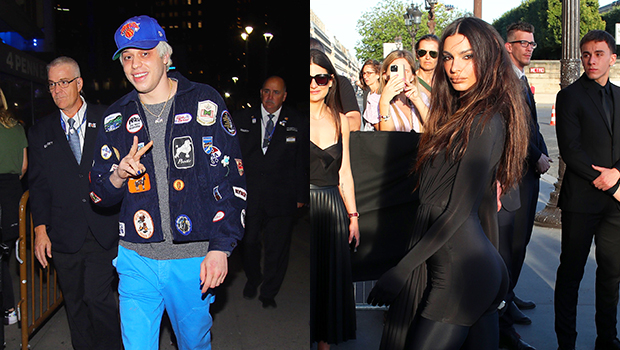 Emily Ratajkowski and Pete Davidson have been spending time together in recent weeks and a source tells HollywoodLife EXCLUSIVELY that they first met in the Spring of 2021, when he was shooting the slasher movie Bodies, Bodies, Bodies. The movie was executive produced by Emily’s estranged husband, Sebastian Bear-McClard, 35, and according to our insider, the “My Body” author, 31, spent a lot of time hanging out on-set during the shoot, which is where she crossed paths with the 29-year-old SNL alum. “Pete and Emily first met when Sebastian and Pete were working on ‘Bodies’ together. It was not strange to see Emily visit Sebastian on set. Pete would make everyone in the film and behind the scenes laugh and it became very familial,” shared the source.

Emily filed for divorce from Sebastian on Sept. 8, per Page Six, but according to the on-set they “seemed totally happy together” during the 2021 film shoot. Still, the same source added, “no one who was involved in the production was surprised to learn that Pete and Emily are now dating.”

Pete is also newly single, after he and Kim Kardashian, 42, officially called it quits on Aug. 5. The SKIMS founder and comedian dated for nine months and had a very public relationship amid Kim’s lengthy divorce with rapper Kanye West, 45.  Since the break-up Pete hasn’t been linked to anyone new — until now, and a second source says it won’t “shock anyone” if he and Emily get serious. “Emily’s gone out with Pete a few times, it’s still very new at this point and she’s having fun and not putting any expectations or labels on it. She really wants to stay single for a while and not jump back into a relationship. Of course, Pete‘s extremely charming, and he’s very much the relationship type, so it won’t shock anyone if he ends up making her his girlfriend.”

Neither Emily or Pete have publicly commented on the romance rumors, but the brunette beauty sent fans on Twitter into a frenzy when she “liked” Dionne Warwick‘s tweet about dating the King Of Staten Island star on November 14.

Back in November 2021 Emily and Pete starred together in an ad campaign for luxury outerwear brand Moose Knuckles that can be seen here. Emily revealed to Bustle in an interview about the campaign that she and Pete were already pals prior to the shoot. “I loved the casting — Pete and Adwoa [Aboah] are both friends,” she told the entertainment outlet.

Later that month, she sang Pete’s praises during an appearance on Late Night with Seth Meyers that can be seen here.  “I think he’s great. He’s a professional,” she shared during her interview. “You should know that about Pete, and he got into character in a real way.” The model added, “He’s got the height. Obviously women find him very attractive.” When Seth admitted he questioned how Pete could be a model Emily went to bat for the comic and said: “I feel like only other men feel that way. Guys are like ‘wow, what’s that guy got’ and I’m like ‘he seems super charming. He’s vulnerable. He’s lovely. His fingernail polish is awesome. He looks good!”

December 2022 Horoscopes and Book Recommendations
Meri Brown Fires Back Against Christine-Related Criticism: I’m Not Her, Okay?!?
Alessandro Michele Is Exiting Gucci
For His Latest Trick, Luca Guadagnino Turns Cannibalism into Art with ‘Bones and All’
Murf Speaks! Star Trek: Prodigy’s Dee Bradley Baker Shares His Lifelong Love of Trek and Its Message