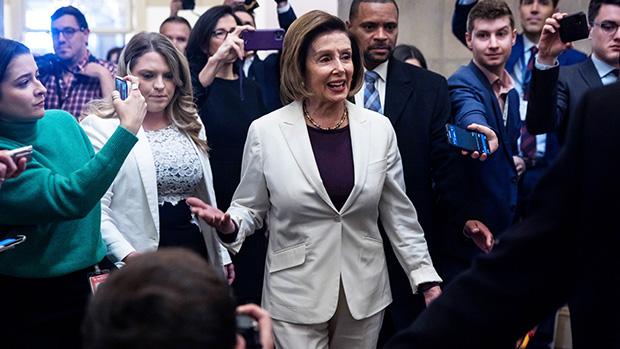 House Speaker Nancy Pelosi announced that she would step down as the leader of the Democratic party in a speech on the floor of the House of Representatives on Thursday, November 17. Pelosi, who’s been a congresswoman since 1987, announced that she would not be the House Minority Leader in the next Congress. “I will not seek reelection to Democratic leadership in the next Congress. For me the hour’s come for a new generation to lead the Democratic caucus,” she said.

After announcing that she’d step down, Pelosi thanked many people, including her fellow members of Congress. “Standing here today, I’m endlessly grateful for all of life’s blessings. For my Democratic colleagues whose courage and commitment with the support of your families have made many of these accomplishments possible, in fact, could not have been done without you,” she said.

Pelosi also thanked her children and her husband Paul Pelosi, who she called a “pillar of support.” She also thanked her colleagues for their support, after he was the victim of a home invasion attack. “Thank you. We’re all grateful for all the prayers and well wishes as he continues his recovery. Thank you so much,” she said to extended applause.

Earlier in her speech, Pelosi spoke about how important the role that lawmakers hold is for the future. “Babies born today will live into the next century, and our decisions will determine their future for generations to come. While we will have our disagreements on policy, we must remain fully committed to our shared fundamental mission: to hold strong to our most treasured Democratic ideals to cherish the spark of divinity in each and every one of us and to always put our country first,” she said.

Before announcing that she would step down, the House Speaker reflected on how much the House has changed since she first took office. “It’s been my great pride in my 35 years in the House, I have seen this body grow more reflective of our great nation, our beautiful nation,” she said. “When I came to the Congress in 1987, there were 12 Democratic women. Now, there are over 90, and we want more. The new members of our Democratic Caucus will be about 75 percent women, people of color, and LGBTQ, and we have brought more voices to the decision-making table.”

In addition to showing how happy she is with the changes, Pelosi shared early memories of seeing the Capitol as a child and reflected on the accomplishments she helped with under Presidents George W. Bush, Barack Obama, and Joe Biden.

Paul Pelosi: 5 Things To Know About Nancy’s Husband Who Was Attacked In Home By Intruder

A number of different Democrats are in the mix to take over as the head of the House Democratic Caucus. It was reported that California Representative Adam Schiff was in talks to seek election according to The Washington Post. Other candidates being considered included Reps. Steny H. Moyer (MD), James E. Clyburn (SC), and Hakeem Jeffries (NY).

With the news that Pelosi is stepping down, a number of different politicians paid tribute to her and her time as a leader, ranging from President Biden to newly-elected officials, who are beginning their first terms after the midterm elections.

The president reflected on Pelosi’s “dignity” in a statement released by the White House. “When I think of Nancy Pelosi, I think of dignity,” he said. “History will note she is the most consequential Speaker of the House of Representatives in our history. There are countless examples of how she embodies the obligation of elected officials to uphold their oath to God and country to ensure our democracy delivers and remains a beacon to the world. In everything she does, she reflects a dignity in her actions and a dignity she sees in the lives of the people of this nation.”

Biden continued to praise Pelosi for the work she did during both his and Obama’s Administrations. He closed with one final thanks for her. “She might be stepping down from her leadership role in the House Democratic Caucus, but she will never waiver in protecting our sacred democracy,” he said. “Nancy Pelosi is first, last, and always for the people.  Jill and I count Nancy, Paul, and their family among our dearest friends. As a nation, we owe her a deep debt of gratitude for her service, her patriotism, and above all, her absolute dignity.”

Former Arizona Congresswoman Gabrielle Giffords also shared how supportive Pelosi was after her tragic shooting in a tweet. “You were there for me after I was shot. You’ve been there for our country in perilous times. As a friend and as a leader, you have answered the call. Thank you for your service. Strong women get things done!” she wrote.

New York Congressman Hakeem Jeffries also praised the House Speaker as the “Greatest of all time” in a short and simple message. “Speaker Nancy Pelosi is the G.O.A.T.” he tweeted. “Thank you for all that you have done for America.”

Even some of Pelosi’s colleagues from across the aisle offered her congratulations. Former Republican House Speaker Paul Ryan shared sincere congratulations. “I tip my cap as I welcome Speaker Pelosi to the former speaker’s club and congratulate her on a historic career in the House,” he tweeted.

Newly elected Florida Congressman Maxwell Frost wrote a short tribute to show that he’s excited to get the opportunity to work with Pelosi, as he begins his political journey. “Thank you Speaker Pelosi for your dedication, creativity, and leadership that has guided House Democrats through thick and thin. Honored to serve with you,” he tweeted, along with a photo.

Former Vice President Al Gore wrote a short praise of Pelosi, before thanking her for her life of public service. “Nancy Pelosi has been the greatest, most effective Speaker of the U.S. House of Representatives in American history,” he wrote in a tweet. “Thank you Speaker Pelosi for your dedicated service and leadership.”

Minnesota Senator Amy Klobuchar also included a photo of herself and Pelosi in her message. “The impact of Speaker Pelosi’s leadership is immeasurable, but at the center is this: She has always fought for the American people,” she wrote. “Thank you, Madam Speaker.”

Even people from the entertainment world extended their thanks to Pelosi. Star Trek star George Takei had so much praise to offer. “Nancy Pelosi has been an incredible Speaker for the Democrats, overseeing the most consequential legislative session in decades. Her decision to step back from leadership, especially given the attack on her husband, is quite understandable. I salute her. She is without parallel,” he wrote.