Tonight on I’m A Celeb (November 16), Boy George was forced to discuss his arrest and subsequent jail term as Scarlette Douglas broached the subject.

George spent four months in jail after he was found guilty of false imprisonment.

And fans watching at home were quick to comment on the conversation in camp, with many branding the 1980s pop star a “hypocrite”.

What happened on I’m A Celeb tonight?

Talking in camp, Scarlette asked the singer: “What happened with you BG and some guy in handcuffs and a radiator?”

“Handcuffs is true but the radiator bit wasn’t true, but thanks for bringing it up,” George said sarcastically.

Scarlette said: “Sorry, it wouldn’t surprise me if that was a fake story.”

Boy George replied: “Sometimes these things, they go into the ether, and people keep saying them and they become folklore.”

Speaking in the Bush Telegraph, George blasted the A Place in the Sun star.

“Scarlette blatantly talked about my court case. I thought it was inappropriate what she did, actually.

“I thought she shouldn’t have said what she said to me,” he said, adding: “And I thought I handled it really well as it’s a big sore point for me when people say things like that.”

Back in camp George told Scarlette that the story wasn’t entirely true or he “wouldn’t be working now”.

Scarlette blatantly talked about my court case. I thought it was inappropriate what she did, actually

“I don’t even know what the full story was, I just remember hearing handcuffs and radiator,” she said, labouring her point.

Boy George replied: “Good job I know what the full story was. The best way to explain my thing, Scarlette, if I beat someone up there would be photographs. And there were none, because it didn’t happen.

“So when you beat someone up, the first thing the police do is take a photograph and they show them in court. There was no photos because I didn’t do that.

“But I did do one thing. I did handcuff him, yeah. Because I’d handcuffed the guy I’d already assaulted him. So, when I said ‘I did it’, I thought, I’ll tell the truth they’ll let me go home.

Opening up about prison life, he added: “Do you know what people in prison were amazing to me. They loved me.”

He added: “Sometimes I think, do I want to explain it? I know the truth.”

“That was a slightly tabloid exaggerated scene,” he said.

Later in the episode, the pair came head-to-head again as George was speaking to Matt Hancock.

Chatting in camp, George told the politician: “Just spend less on arms. £35 billion a year. Why do you sneer at spending less on arms?”

Scarlette then said: “Matt, just quickly, you know when you asked whose socks they were and I asked you to put them over here… remember the socks from this morning, I said just stick them… where did you put them?”

A shocked George said: “She’s trying to save you, very interesting.”

In the Bush Telegraph he said: “I just noticed sometimes when I start a debate with Matt, Scarlette comes in and kind of shuts me down a bit or tries to change the subject.

“I don’t know whether Scarlette’s got political aspirations. But sorry, I’m just not going to stop talking. I will say what I want.”

Viewers watching I’m A Celebrity tonight were quick to react, with people admitting they were off to join the “Scarlette Douglas fan club”.

“Boy George loves to stick his nose in other people’s business. But when someone asks him about his life, it’s ‘inappropriate’,” said one.

“The hypocrisy of Boy George – not happy Scarlett questioning him about the handcuff incident yet us happy to dish it out to others,” said another.

“Boy George!! You don’t like being called out! #ImACeleb SCARLETT WE LOVE YOU!” said another.

“But he didn’t mind asking Matt Hancock about what he did,” said another. “Don’t like Boy George.”

“Aaah right Boy George, you’re allowed to grill Matt, but it’s inappropriate for anyone to grill you,” said another.

“Omg the hypocrisy!” said another.

“How can Boy George think it’s ‘inappropriate’ to talk about his court case. When all he’s done is quiz Matt? The man is a born hypocrite,” said another.

Others sensed a rift brewing.

“Boy George what is your problem with Scarlette?” asked one fan.

“So George is gonna target Scarlette now because she brought up the handcuff story? Classy,” said another.

“I can sense murder with Scarlett and Boy George incoming,” another said.

“Boy George has got it in for her,” another claimed. 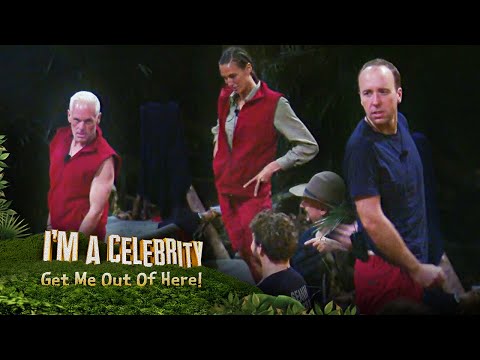 What did you think of Scarlette on I’m A Celeb tonight? Head to our Facebook page @EntertainmentDailyFix and share your thoughts.