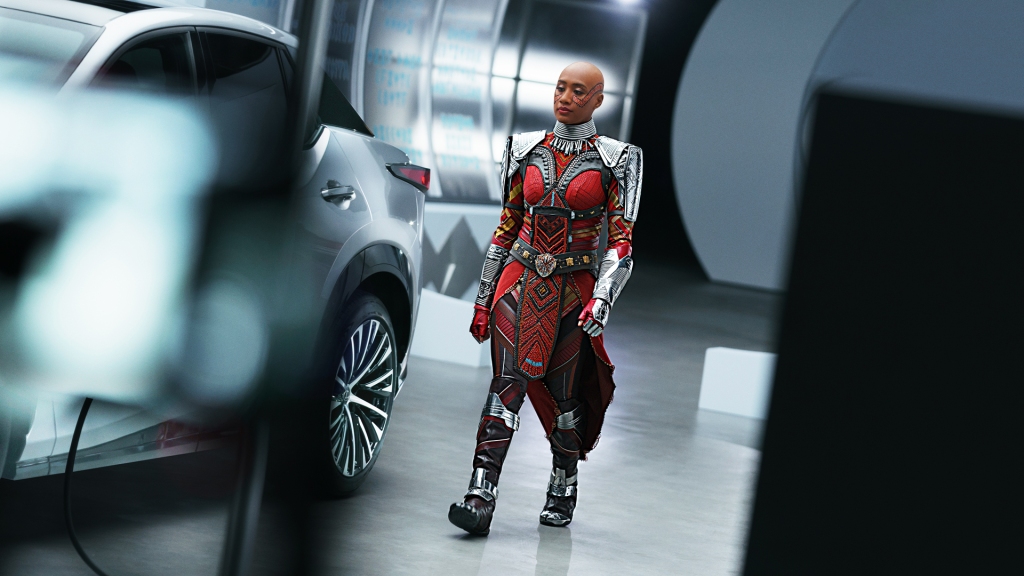 The fruits of Disney’s industry-reported $100M+ promotional partner campaign on Black Panther: Wakanda Forever have been yielded, not just in a November U.S./Canada box office opening record of $181.3M and 12.7M admissions but in stoking a diverse range of demographics including Black, Latino/Hispanic and older women to cinemas in droves this past weekend.

The media value for the sequel’s promo-partner lineup, I hear, is double that of the first Black Panther and the same value as last year’s Eternals.

Wakanda Forever pulled in a Black audience of 43% and Latino and Hispanic of 22%, per PostTrak, which combined at 65% is greater than the first 2018 movie’s respective demos, which counted a 58% turnout. Even more amazing is that this time around, women over 25 repped the biggest crowd for Wakanda Forever at 32%, giving the Ryan Coogler-directed sequel its highest audience grade at 97%.

Given the female independence and STEM themes in the MCU title, Disney’s Global Partnership Marketing and Strategy group went after those demos and more head-on with a lineup of best-in class advertisers such as Lexus, Adidas, Target, Procter & Gamble, Mastercard, Mac Cosmetics, the NBA, McDonald’s, Xbox and Sprite Zero; these brands are a mix of returning and frosh partners for the Mouse House.

The anomaly in this promotional partner campaign is the link-up between Lexus and Adidas. Rarely, if ever, have two promo partners teamed for a commercial synced to a major tentpole movie. Traditionally, big merchandise companies have their own individual bespoke messages they want to transmit to consumers laced in the co-branding with a big Marvel movie.

While Lexus had its own separate commercial, directed by Lexus/Marvel spot filmmaker Anthony Leonardi III (previous Lexus-Marvel spots include the Kumail Nanjiani “Parking Spot” ad for Eternals), spotlighting its 2023 electric Lexus RZ 450e starring Wakanda‘s Dora Milaje and its General Okoye (Danai Gurira), there was another.

Adidas teamed with Lexus to design the interior of a Lexus LC 500 Convertible, with Kansas City Chiefs wide receiver JuJu Smith-Schuster rolling up in it. For the world premiere, Lexus and the Adidas School for Experiential Education in Design paired with Carbon and influential automotive virtual designer Jon Sibal to cook up another custom vehicle, the hybridized Lexus RX 500h.

“It was authentic for these brands to connect, and because of what the film represented: bringing people together and inclusivity,” said Mindy Hamilton, Disney’s SVP Global Partnership Marketing & Strategy. “Everybody saw an opportunity to work together to celebrate this even further and to make the film even bigger. And it gave fans more ways to celebrate.”

Wakanda Forever represented the third team-up with Marvel Studios, Lexus having made a cameo in the original Black Panther in a Busan Street chase scene. In Part 2, the Lexus LC 500 Convertible and the Lexus GX also have cameos.

“Lexus itself leans into innovation and technology and Wakanda certainly stands for that, and so they were a natural and were always in the DE&I space authentically,” Hamilton said.

Lexus’ collaboration with Marvel Studios and the ad creation was led by Walton Isaacson, Lexus’ agency of record for Black, Hispanic and LGBTQ+ audiences.

Here’s the latest Lexus spot, they’re MCU short movies in and of themselves:

Adidas did even more connected with the sequel. The athletic brand came together with Wakanda Forever costume designer Ruth E. Carter, who won an Oscar for Black Panther, and members of Adidas School for Experimental Education in Design to create tailor-made costumes for the film for such characters as Letitia Wright’s Shuri and Gurira’s Okoye, with futuristic footwear inspired by the pic’s technology, as well as sporty designs with transparent materials.

Adidas and Marvel also had a range of innovative apparel and footwear, spanning tennis, running, football and sportswear. There also were Black Panther-themed workouts and fitness challenges offered to Adidas members in key markets via the brand’s Runtastic app. The workout took cues from the pic’s action-packed sequences and characters, infused in a fully immersive Wakanda environment.

Target served up up an exclusive Wakanda merchandise line across toys, homes, apparel and beauty with everything from pillows and PJs to the only-at-Target Lego Black Panther: Wakanda Forever Royal Sea Leopard ship. Shoppers were able to get in on the action and explore two immersive augmented-reality experiences. In stores, there were Wakanda Forever signs in the toy department, whereby consumers could scan the QR code with their smartphone to explore “Wakandan-inspired” technology. From there, they were able to watch the build of the Lego Royal Sea Leopard or interact with one of the Hasbro Titan 3-pack action figures. Target also hosted more than 130 community screenings of the sequel in support of, and attended by, nonprofit organizations in select markets. Target’s partnership with the film aligns with their own Racial Equity Action Change (REACH) commitment to creating meaningful and authentic experiences for Black team members and guests.

One of Disney’s great signatures with its promo-partner ads is landing talent from the film in key brand commercials, and Target’s starred Dominique Thorne’s Riri.

Among other stars starring in brand ads, Wright was a huge part of the Xbox promotion for the film, which was involved in appealing to the latest generation in gaming and STEM industries. Wright appeared in a series of inspirational videos. In the spirit of Xbox’s brand platform, Power Your Dreams, the console kicked off with a drone presentation narrated by Wright. Also Professor Jacoby DuBose delivered a Wakanda-inspired HBCU Lecture from Howard University’s Chadwick A. Boseman College of Fine Arts, where he expanded on the MakeCode curriculum and took part in a panel of Black gaming and STEM innovators with the entire lecture streamed live on the University’s social channels. Xbox launched Project Amplify, tapping into Black professionals within Xbox and the gaming industry to share their personal origin stories, advice and teachings for inspiring a more equitable STEM space. There also were giveaways including console kits inspired by the iconic “Wakanda Forever” salute and the Black Panther hero suit, custom controller holders, bundled with replica Kimoyo beads and custom sterling charms. Budding innovators were also able to participate in a new MakeCode curriculum inspired by the film, where users can learn how to write code for their own playable Black Panther: Wakanda Forever-themed activity.

Mastercard’s efforts with Wakanda Forever celebrated Black women-owned small businesses. The credit card’s support of the pic is part of its half-billion-dollar commitment to helping close the racial wealth and economic gap in the U.S. by supporting Black women-owned businesses through its Strivers Initiative, and partnerships with HBCUs and youth groups around the country. Mastercard also invited small-business owners and youth groups to advance screenings of the MCU sequel in NYC and Atlanta. It was the first time Disney partnered with Mastercard.

Also rounding out the advertisers attached to the film were longstanding Disney promo partner McDonald’s, which touted a Happy Meal line, with one of 10 action figures inside. Sprite Zero, which zeroed in on the Gen Z demo, with Wakanda Forever bottles and cans also served up a QR-activated AR and digital experience that featured the “origin stories” of three diverse female creators behind the sequel: production designer Hannah Beachler, storyboard artist Jasmine Alexia Jackson and sculptor Alicia Diaz.

There also was a first-ever NBA and Disney co-promotional campaign for Wakanda Forever. Dubbed “NBA Forever,” a mashup promotional video of the pic and on-court performances dropped on social and on ESPN on October 21 and during the October 26 double header on ESPN. Also 15 NBA teams hosted Wakanda Forever theme nights in the stadium.

Among the beauty brands that boarded Wakanda Forever were the Mac Collection, which offered up such items as classic bullet lipsticks with shades Wakandan Sunset (bright cool fuschia), Dora Milaje (blue-red), Royal Integrity (warm chocolate) and Story of Home (mid-toned neutral with slight pink undertones); lip gloss in the shade Feelin’ It (translucent gold); and Love Me Liquid lip color in the shades of The Shadows (black), Thicker Than Water (blood red), Show-Off (red-bronze) and Wakanda Forever (brilliant bright purple).

Procter & Gamble had its limited-edition Bevel x Black Panther: Wakanda Forever edition safety razor gift set. P&G haircare brands in conjunction with the film also had My Black Is Beautiful and Gold Series with specialty product packs showcasing My Black Is Beautiful’s Golden Milk Collection and the Gold Series Core Collection, at Target, Walmart and Kroger. In addition, MBIB and Gold Series partnered with the film’s hair department head Camille Friend. She worked with the brands on media engagement leading up to the film’s release, discussing the power of hair and how it shaped identity as well as hair styling and care tips. Disney recently worked with P&G on Ms. Marvel and Doctor Strange in the Multiverse of Madness. My Black Is Beautiful was a special partner for Wakanda Forever, as the product was founded by a female scientist, keeping with the pic’s STEM themes.

Said Hamilton about the Wakanda Forever promotional partner lineup: “We’re able to deliver these very specific custom collaborations together, not only just working with partners and their agencies to tell stories, but also bringing in our filmmaking talent. Very few people can replicate that. It’s our secret sauce.”