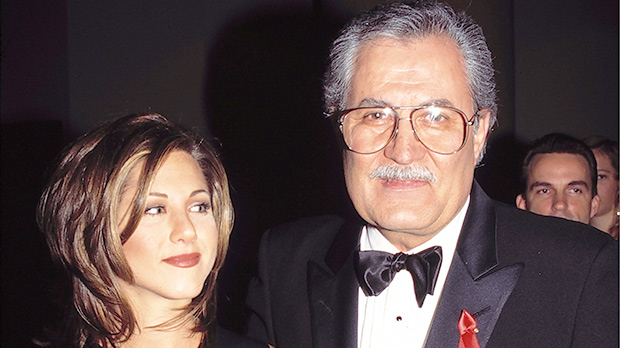 Jennifer Aniston had to say goodbye to her dad, Days of Our Lives star John Aniston, who died on Thursday, November 11 at the age of 89. The Friends alum broke the news of her father’s passing with a heartfelt Instagram tribute, where she called him “one of the most beautiful humans” she ever knew.

Jennifer’s father left her when she was only 9 years old. She was raised by her mother Nancy Dow, who she eventually became estranged from. Nancy died in 2016. Luckily, Jennifer made peace with John over time, and they were on good terms by the time he passed away. Keep reading to learn more about John and the complicated relationship he had with his daughter.

What did John Aniston do?

John Aniston was a Greek-born actor whose career started in 1962 with a guest role in the show 87th Precinct. He appeared on more shows that are still popular today including Airwolf, Gilmore Girls, The West Wing, Star Trek: Voyager, and Mad Men. John’s best known for appearing on Days of Our Lives for over 3,000 episodes. He joined the show in 1970 as Dr. Eric Richards. He returned to the show in 1985, when he was cast as Victor Kiriakis, and he remained a staple of the show up until 2022. John won three Soap Opera Digest awards for his work in Days of Our Lives. He was also nominated for Outstanding Supporting Actor in a Drama Series for the 2017 Daytime Emmy awards, and he was also given an Emmy lifetime achievement award in 2022.

Jennifer mentioned her father’s incredible career in her tribute after his passing. “For over 30 years, his dedication to that show [Days of Our Lives] has gained him the respect and admiration of his fellow actors, deep friendships, and thrilled millions of fans around the world,” the star wrote. “His career is literally the definition of lifetime achievement.”

Did he have any other children?

John had Jennifer from his first marriage to actress Nancy Dow. They were married from 1965 to 1980. John was a stepfather to Nancy’s son John Melick III, 63, while they were together. In 1984, John got married to Sherry Rooney, who he met on the set of the soap opera Love of Life. They had one son together, Alexander, who is now 33 years old. Alex was not famous like his parents or sister Jennifer. He reportedly sold taxidermy roadkill and lived in a van where he traveled across the country. He reportedly had two children with his former partner, Adriene Hallek. It’s unclear if Alexander and Jennifer speak.

Jennifer and John’s relationship improved by the time he died, compared to their situation in the past. They were estranged after John left Nancy and Jennifer when the star was only nine years old. Jennifer openly talked about her father leaving her with Rolling Stone in 1999 and said she was “shocked” by what he did.

“My mom told me. I went to a birthday party, and when I came back, she said, “Your father’s not going to be around here for a little while,’ ” The Morning Show star said in the interview. “She didn’t say he was gone forever. I don’t know if I blocked it, but I just remember sitting there, crying, not understanding that he was gone. I don’t know what I did later that night or the next day. I don’t remember anything other than it being odd that all of a sudden my father wasn’t there. And he was gone for a while.” Jennifer revealed that she didn’t see her father until a year later. “He just called one day and said, ‘Let’s go see The Fantastickes.’ So we had a little dinner and saw the show. After that, I started seeing him on weekends, and this new way of life just unfolded,” she recalled.

Jennifer also confirmed to Rolling Stone that she eventually asked her dad why he left their family, but John didn’t do a good job at explaining why at first. “Like I said, he’s not a good communicator. Maybe if my parents had talked more. There were signs, but also, knowing my father, he probably didn’t say anything,” Jennifer said. “But, as best he could, my dad explained and apologized, and it’s enough. We’ve made up. There’s still parts that are hard for me, but I’m an adult. I can’t blame my parents anymore.” When asked what John taught her about fatherhood, Jennifer quipped, “He wasn’t around to do that. Maybe don’t marry a Greek man, and just stick around. That’ll do it.”

During the time that Jennifer and John were estranged, the actress still maintained relationships with her father’s side of the family, including John’s mother Stella. “She was a Greek grandmother who just loved me more than anything and was so fun to be around,” Jennifer told The Hollywood Reporter in 2015. “She had the best stories, she made me laugh. Beautiful, funny, gorgeous, hysterical — all the Greeks, all of my Greek family, were.” She also recalled her grandmother’s tragic death, saying in the interview, “I was around 21 years old, and it was the first time I’d had a loss. It was really sad. But then, like anything, you have to move on.”

In June 2022, five months before John’s death, Jennifer honored her father at the Daytime Emmy Awards. She gave an an emotional speech while presenting John with the lifetime achievement award. Jennifer’s speech, which can be seen above, was pre-recorded and John was not present at the in-person ceremony.

“It’s an opportunity to not only pay tribute to a true icon in the daytime television world, but it’s also a chance to recognize the lifelong achievements of a great and well-respected actor who also happens to be my dad,” Jennifer said in her speech. She went on to list all the television projects that her father appeared on. “You name it, I’m sure he’s been on it,” Jennifer quipped.

How Kate Middleton and Prince William Broke Their Social Media Silence After the Harry & Meghan Trailer
Art Basel Miami Beach: What Does the Future Hold for the Most Raucous Week in American Arts?
The Best Man: The Final Chapters Limited Series Trailer Reunites Old Friends
Los Angeles Again Nearing Covid Thresholds For Universal Indoor Mask Mandate In Public Spaces
Adam Sandler Reflects On Getting Harsh Reviews For Billy Madison And His Other Early Movies: ‘They Hate Us’