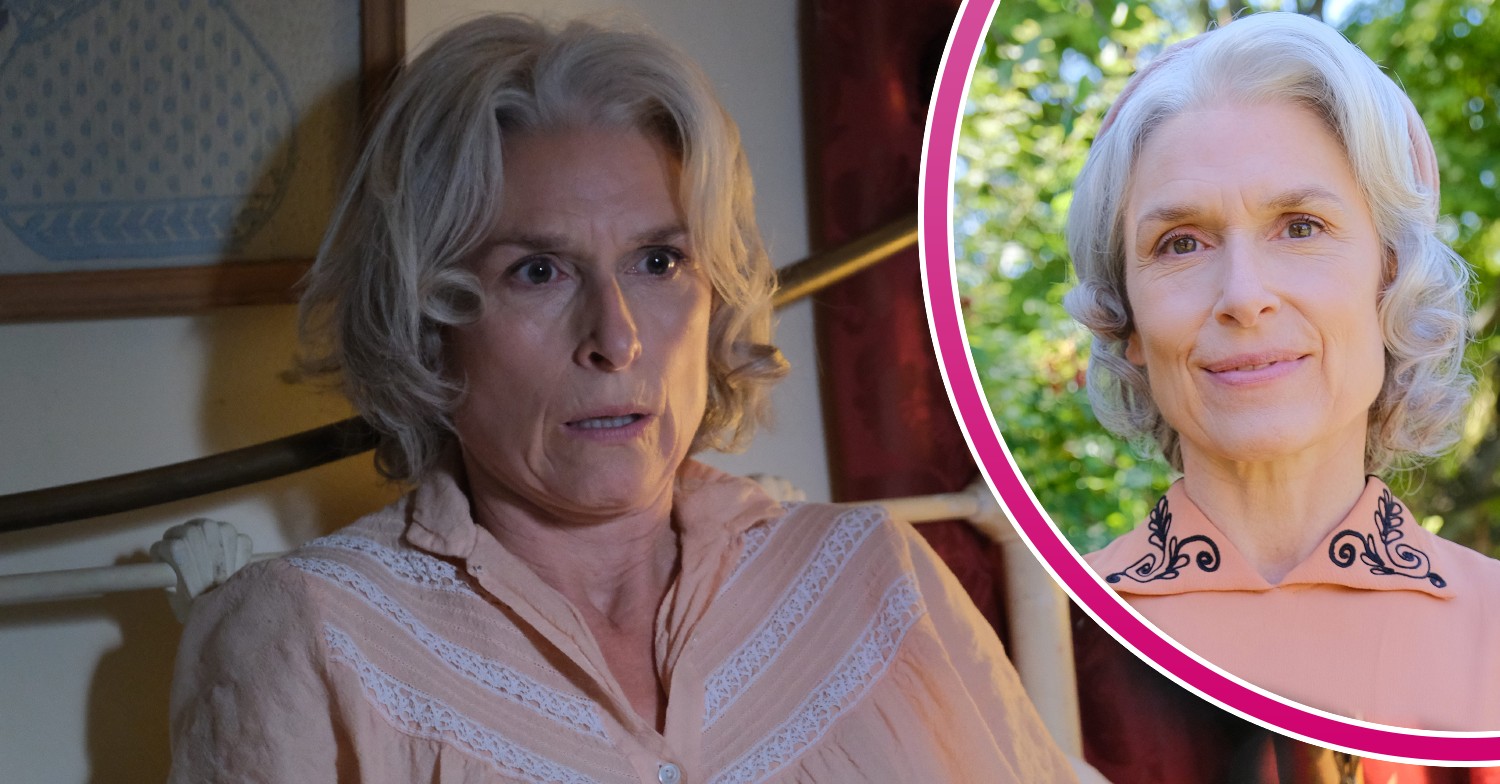 TV veteran Amelia Bullmore is one of the most treasured cast members of The Larkins.

Amelia plays the loveable Mrs Pilchester who adores Pop and will do anything for him.

The actress has also starred in a variety of other hit TV shows from Ashes to Ashes to The Crown.

But what do we know about her life beyond the screen? Is she married? Read on!

Who is Amelia Bullmore?

Amelia Bullmore is a British actress, screenwriter and playwright.

She rose to fame with her role as Steph Barnes in Coronation Street.

But acting isn’t her only talent, as she also has a successful career in writing.

Her writing credits include episodes of This Life, Attachments and Black Cab.

Who does Amelia Bullmore play in The Larkins?

Amelia plays Miss Pilchester in the ITV drama The Larkins.

Despite the fact that she’s “lonely and unfulfilled”, she is game for anything, especially if encouraged by Pop Larkin, whom she adores.

How old is Amelia Bullmore?

This means that she is 58 years old.

Gill Murray was the head of the MIT unit, and her position of power even earned her the role of ‘Godzilla’.

However, the actress decided to quit the show after series four.

In the series, Gill battles alcoholism and even though she is reported, she is later able to retire with her reputation intact.

After Amelia quit, Suranne Jones revealed that she almost tried to quit the show too.

She told the Mirror: “We had thought it might end, then ITV said ‘Look, it’s really popular, people love the characters, would you do another one? We thought, ‘why would we not?’.

“The golden carrot for me was my role as a producer – I’ve always stuck my nose in, but now I do it officially!”

What did Amelia Bullmore write?

Not only does Amelia Bullmore act, but she has also written episodes in many favourite TV shows including This Life and Attachments.

Amelia wrote a series of 10-minute films in Black Cab.

She was also a Dennis Potter Award finalist in 2000 for her television screenplay, The Middle.

Her radio writing includes four series of Craven, a Fact of Fiction and Cashflow.

And there were a few episodes from her for Scott & Bailey.

Paul is best known for appearing in The Thick of It, Utopia and Line of Duty.

The couple met in Manchester in 1992 while performing A View from the Bridge.

Who was Amelia Bullmore in Coronation Street?

Steph Barnes was a regular on the show from February 1990 to September 1991.

Talking about her time on the show, she told What To Watch: “The team on Corrie are fantastic and I’m more in awe now than I’ve ever been. I used to read a script and think, ‘Ooh, they’ve spelt that wrong’, or ‘My character wouldn’t go to Blackpool on holiday’.

“Now I realise someone’s spent three months doing everything they can to make that script happen. I was so ungrateful!”

Who does Amelia Bullmore play in Happy Valley?

Vicky Fleming decides to drug John and blackmail him.

However, driven to fury and fear, John ends up murdering her.

Amelia explained her character’s motivations to the Daily Express, saying: “I think that she’s been paranoid about being humiliated, so in a way she is waiting for her worst scenario. So, when it happens, she is ready to take action.”

Who does Amelia Bullmore play in Gentleman Jack?

What else has Amelia Bullmore been in?

Amelia Bullmore has been in a variety of well-known TV shows.

She was very easily amused and would often pull pranks and shower Alan with cheap and unwanted gifts.

The actress then took on the role of Caroline Price in Ashes to Ashes alongside Keeley Hawes.

Caroline Price was Alex Drake’s mother and Tim Price’s wife in the series.

Read more: The Larkins on ITV: Everything you need to know about PC Harness actor Barney Walsh, Bradley’s son

The next episode of The Larkins will air on Sunday, November 6 on ITV.

Are you enjoying the new season of The Larkins? Leave us a comment on our Facebook page @EntertainmentDailyFix and let us know.

U.S. Beats Iran, Advances To Second Round Of World Cup; Will Face Netherlands Next
Jim Bob and Michelle Duggar Flaunt Massive Weight Loss: What’s Going On With These …
AMC Entertainment Shares Surge, Bucking Soft Market
I’m A Celebrity viewers distracted by the same thing during tonight’s Cyclone trial
Emma Corrin Calls For Gender-Neutral Awards: “I Hope For A Future In Which That Happens”