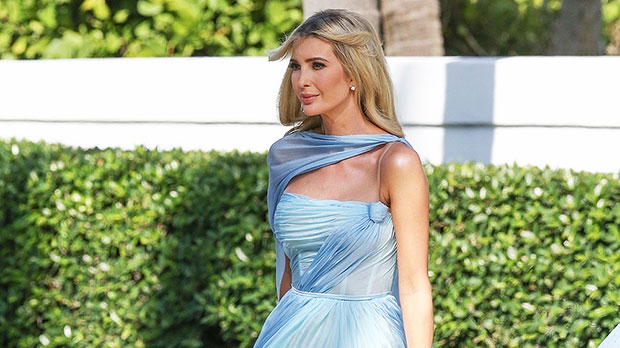 Ivanka Trump almost showed up the bride, her own sister, when she arrived at Tiffany Trump’s wedding to Michael Boulos on Saturday, Nov. 12! The business mogul looked incredible during the extravagant event held at her father, Donald Trump’s, Mar-A-Lago estate in Palm Beach, FL. She wore a stunning, powder blue Grecian gown featuring a long train as she styled her trademark blonde locks long and loose.

The former model also took to her Instagram to share photos of her family on Tiffany’s big day. One featured her posing with daughter Arabella, 11, who wore a powder blue dress as well. In another snap, Ivanka and husband Jared Kushner pose with Arabella and their two sons, Joseph, 9, and Theodore, 6.

Tiffany’s wedding appeared to go off without a hitch, even though there were reportedly concerns about a possible Category 1 hurricane hitting the southern Florida property. In fact, the Mar-A-Lago staff were evacuated on Wednesday, Nov. 9 over safety issues, according to a source for Page Six. “It was going to be a whole over-the-top thing,” the insider said at the time. “They had to cancel events today and canceled a golf outing for tomorrow.” While the source went on to say Tiffany was “flipping out” about the weather situation at the time, the club reopened on Friday and the wedding preparations picked right back up.

On January 19, 2021, Tiffany announced her engagement to Michael, revealing that the heir to his family’s multibillion-dollar business Boulos Enterprises had popped the question after 3 years of dating. Alongside a snap of the couple at the White House posted to her Instagram, Tiffany said it was an “honor to celebrate many milestones” at 1600 Pennsylvania Ave. while her father was President, and that her engagement was the icing on the cake. “Feeling blessed and excited for the next chapter!” she added.

After meeting in Greece in 2018, Tiffany and Michael began dating and were inseparable from then on out. Michael serves as the associate director of SCOA Nigeria, the director of the Fadoul Group and the business development manager for Royalton Investment. Tiffany graduated from Georgetown Law School in May 2020, and is currently a legal research assistant.

Meanwhile, Ivanka’s dad Donald has been married three times, first to model Ivana Zelníčková, and the former pair share two sons, Donald Jr, Eric, and Ivanka together. He next married actress Marla Maples, who is the mother of Tiffany. After Donald’s second divorce, he tied the knot with Melania and she gave birth to their only son Barron in March 2006.

Presidential Daughters Of The Last 20 Years: From Chelsea Clinton To Ivanka To Biden’s Two Girls