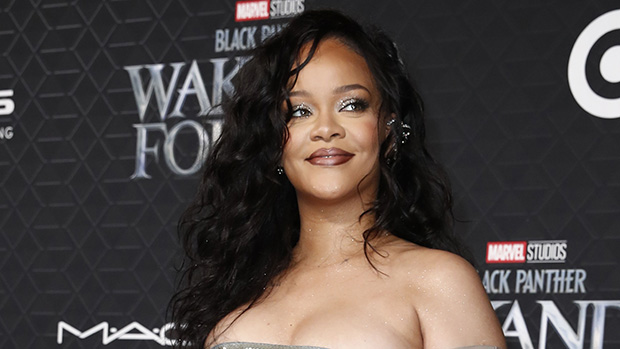 “I’d give my heart to this place / I’d give my soul or whatever it takes, never run away / I’ve got enough angels to storm the gates, I’m not afraid,” Rihanna sings at the start of “Born Again,” her second song off the Black Panther: Wakanda Forever soundtrack. The song – written by Rihanna, The-Dream, and composer Ludwig Göransson, per Genius – is a somber companion to “Lift Me Up,” and sees Rihanna make a vow. “So until those rivers run out / It runs through me / Wherever you are, I’ll bе there / We carry on (Wе carry on) / Born again.”

Rihanna “Lift Me Up,” arrived on Oct. 28. The song was the first new track from Rih in six years, and the Tems-penned song was a tribute to the late Chadwick Boseman, who portrayed T’Challa in the first Black Panther movie. “Burning in a hopeless dream / Hold me when you go to sleep / Keep me in the warmth of your love / When you depart, keep me safe / Safe and sound,” sings Rihanna in the song, which also featured contributions by director Ryan Coogler and composer Ludwig Göransson. The song debuted at No. 2 on the Billboard Hot 100, behind Taylor Swift’s “Anti-Hero.”

“Lift Me Up” has “elements from [Ludwig Göransson’s] time in Senegal, several years ago, it has elements from — obviously I recorded here in the states, recorded in the U.K., also recorded in Mexico,” Ryan Coolger told Entertainment Tonight. “And then Tems and I and Ludwig sat down in Nigeria, and put some real work in on it, a few months back.” Ryan also said he was “forever grateful” to Rihanna for joining the soundtrack.

“I’ll say this, I didn’t get her to do anything. I don’t think anybody can get her to do anything, she’s a person who marches to the beat of her own drum,” Coogler told ET. “I’m just thankful that she wanted to contribute to this, and I’ll be forever grateful and not just to her, but all the other fantastic musicians that are on the soundtrack. But yeah, she is a big one, she is the one and only.”

Supporting the theory that Rihanna is on her own schedule, the music and fashion icon doused fans’ hopes that this return to music and her upcoming Super Bowl Halftime show means her ninth album will see the light of day. “Super Bowl is one thing. New music is another thing. Do you hear that, fans?” she told the Associated Press with a laugh. “The second that I announced this, I said, ‘Oh, my God, they’re going to think my album is coming. I need to get to work.’”

Snoop Dogg echoed Ryan Coogler when praising Rihanna’s talent. When the Doggfather spoke with HollywoodLife, he reflected on what advice he could give Rih since he and a group of hip-hop icons — Dr. Dre, Mary J. Blige, Kendrick Lamar, Eminem, 50 Cent, and Anderson .Paak – performed at Super Bowl LVI in February. “I can’t give her any advice,” Snoop told  HollywoodLife. “She’s one of the greatest to do it. She knows what to do. But I do know that she’s gonna create a show that everyone will talk about for many generations.”

Who Is The New Black Panther After Chadwick Boseman’s Death? Everything You Need To Know