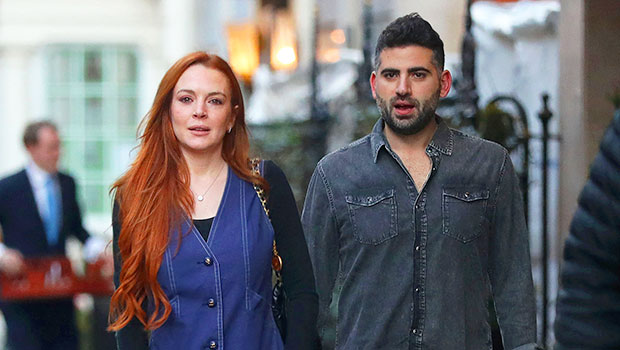 Lindsay Lohan is returning to acting, and she’s celebrating by opening up to Cosmopolitan magazine about the wild past, her future in Hollywood, and her handsome husband, Bader Shammas, who she says is pretty “amazing”. Plus, she posed for the cover, as well as photos inside the magazine’s “Work Issue”, and she looks amazing!

With her upcoming rom-com, Falling for Christmas, the Mean Girls star revealed she’s ready to return to the spotlight. But things aren’t exactly the same as they were when she was at the peak of her acting career. To start, social media now gives celebrities a chance to “say who they are and who they want to be”, Lindsay told the magazine. “[Social media] is nice. Because now I feel like…when I first started out in the business, none of us had a say in how to control our own narrative. There were paparazzi pictures, and then people ran with it. So I think it’s really good that in this day and age, people can say who they are and who they want to be. And I admire and appreciate that. I’m a little jealous because I didn’t have that. But I think it moves really fast and I just try to keep up as best I can. And I check everything before I post it. I’ll send it to people. Because you have to.”

Another thing Lindsay now has that she didn’t have back then is a great support system. The 36-year-old actress married her husband in early July, and she’s loving married life. When asked who her strongest supporters are, she told the magazine, “I have an amazing husband, who’s a very calm person. Just the best. And my family. And I feel like I have a small group of good friends who are just really good people. That’s the only support that I really need: friends, family, and loved ones.”

And it’s a good thing that she has their support because on top of executive producing and starring in her new Netflix movie, which drops on Nov. 10, she signed a deal to be in two more films for the streaming service, so there’s more to come. And Lindsay said it was an easy decision to sign with the top streaming service. “It was really comforting to me, when I got the script [for Falling for Christmas}, to see a movie that was a romcom because it’s always fun to work on something lighthearted and family-oriented that makes people happy and provides a bit of an escape,” Lindsay said. “And I was excited to kind of come back, to do something with Netflix, who is a big family in a way. It was the right fit for me, especially to be able to executive produce it.”

She added, “I’m excited for the future and I’m just proud of how everything’s coming together … I feel everything’s very positive, and I like that. I want to keep that momentum.”

Riley Keough Has Been ‘So Good’ With Twin Sisters After Lisa Marie’s Death, Her Uncle Reveals
Stop Wasting Money At The Nail Salon: This LED Nail Lamp Is Nearly 40% Off
All the Beating Hearts
Alec Baldwin officially charged for ‘reckless acts’ leading to shooting on ‘Rust’ set
Salma Hayek Says She Was “Nearly Killed” By Channing Tatum Filming ‘Magic Mike’ Lap Dance Scene