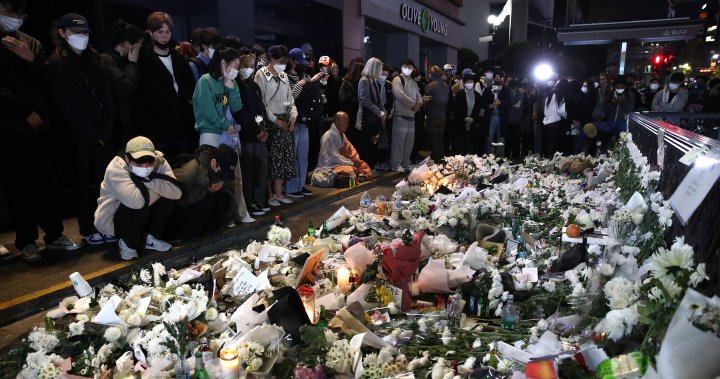 A South Korean singer and actor is among the more than 150 people dead after a crowd surge during Halloween festivities in Seoul, South Korea.

Lee Jihan was celebrating Halloween in the Itaewon neighbourhood on Saturday when chaos ensued on the intensely overcrowded streets, causing a crowd crush. He was 24 years old.

The crowd surge — which killed more than 153 people, including 26 foreigners as of Monday morning — is the worst disaster in South Korea’s recent history.

Lee’s agencies, 935 Entertainment and 9Ato Entertainment, both confirmed the star’s death in a public statement. With plain text on a black background, the statement, which is in Korean, read: “We are sad to deliver such news today, but Lee Jihan has passed away in the crush in Itaewon last night.”

2:09
Canadian among those injured in Seoul crowd surge


“We would like to express our deepest condolences to his family, who are saddened by the sudden tragic news, also to everyone who loved him,” the statement continued.

Lee’s agency also said he was “a sweet and warm friend to all” who had a “bright smile” and “passion for acting.”

Lee rose to popularity after he appeared as a contestant on the Korean TV program Produce 101, a singing competition where hopefuls battled for one of 11 spots in a new Korean boyband. He auditioned with a cover of EXO’s Overdose.

He also performed INFINITE’s Be Mine alongside several other competitors on Produce 101.

Though Lee did not win the competition, he garnered a considerable fanbase after the show.

Lee later used his new popularity to earn an acting role in the K-Drama Today Was Another Namhyun Day.

Saturday’s disaster was concentrated in a sloped, narrow alley, with witnesses and survivors recalling a “hell-like” chaos with people falling on each other like dominoes. They said the entire Itaewon area was jammed with slow-moving vehicles and partygoers clad in Halloween costumes, making it impossible for rescuers and ambulances to reach the crammed alleys in time.

How and why do crowd surges turn deadly? Experts explain

Halloween festivities in Itaewon have no official organizers. South Korean police said Monday they don’t have any specific procedures for handling incidents such as crowd surges during an event that has no organizers.

More than 80 per cent of the dead were in their 20s or 30s and 11 were teenagers, the South Korean Interior Ministry said.

The crowd surge was South Korea’s deadliest disaster since 2014, when 304 people, mostly high school students, died in a ferry sinking.

According to the website AllKPop, Lee’s funeral will take place on Tuesday.