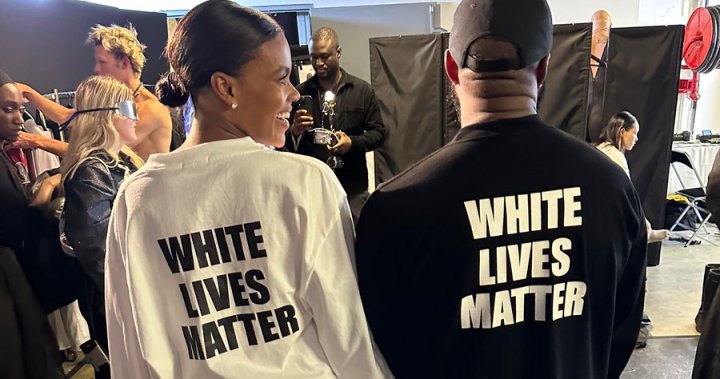 Kanye West is no stranger to voicing bold, contrarian opinions. Nevertheless, attendees at his Yeezy Season 9 event at Paris Fashion Week on Monday were shocked to see the rapper wearing a shirt emblazoned with the slogan “White Lives Matter.”

The shirt, worn by West (who changed his name to Ye in 2021) and several models on the catwalk, featured an image of Pope John Paul II on the front, with the words “Seguiremos Tu Ejemplo,” meaning “We Will Follow Your Example.”

International civil rights law organization the Anti-Defamation League has defined “White Lives Matter” as “a white supremacist phrase.” They claim the slogan emerged as “a racist response to the Black Lives Matter movement.”

Ye wore the shirt during his opening statements for the event. During a more than six-minute speech, Ye spoke about his music career, his ex-wife Kim Kardashian’s Paris robbery in 2016, classism in fashion, and his former manager Scooter Braun. (Ye claimed Braun insisted he “make more money” and continue his 2016 Saint Pablo Tour, which was later cancelled.)

“You can’t manage me. This is an unmanageable situation,” Ye said. “You can’t turn the music lower, this is a God’s dream, a dream that can’t happen without the help of God. The journey. The people who believed early. The people who sat in my car and listened to the early versions of Yeezus.”

Kanye West decision to wear a “White Lives Matter” shirt is disgusting, dangerous, and irresponsible. Some of y’all will rush to defend him. You should ask yourselves why… pic.twitter.com/YT4a6c9tKI

Jaden Smith, who was present at the show, left shortly after seeing Ye’s shirt and posted “Black Lives Matter” to his social media accounts

On Tuesday, Ye posted an Instagram story defending the shirt. On a black background with white text, Ye wrote, “Everyone knows that Black Lives Matter is a scam.”

Ye has been criticized for politically charged fashion choices in the past, including when he wore a Make America Great Again (MAGA) hat during a Saturday Night Live performance in 2018. He previously endorsed Donald Trump on several occasions, and met with the former president at the Oval Office that same year.

The Yeezy Season 9 event was Ye’s fourth fashion show hosted in Paris since his launch as a designer in 2011.

The Yeezy brand has since had a tumultuous run despite some success, with Ye terminating a two-year contract with Gap last month, claiming the brand failed to meet contractual obligations. Ye is also set to exit a corporate partnership with Adidas.