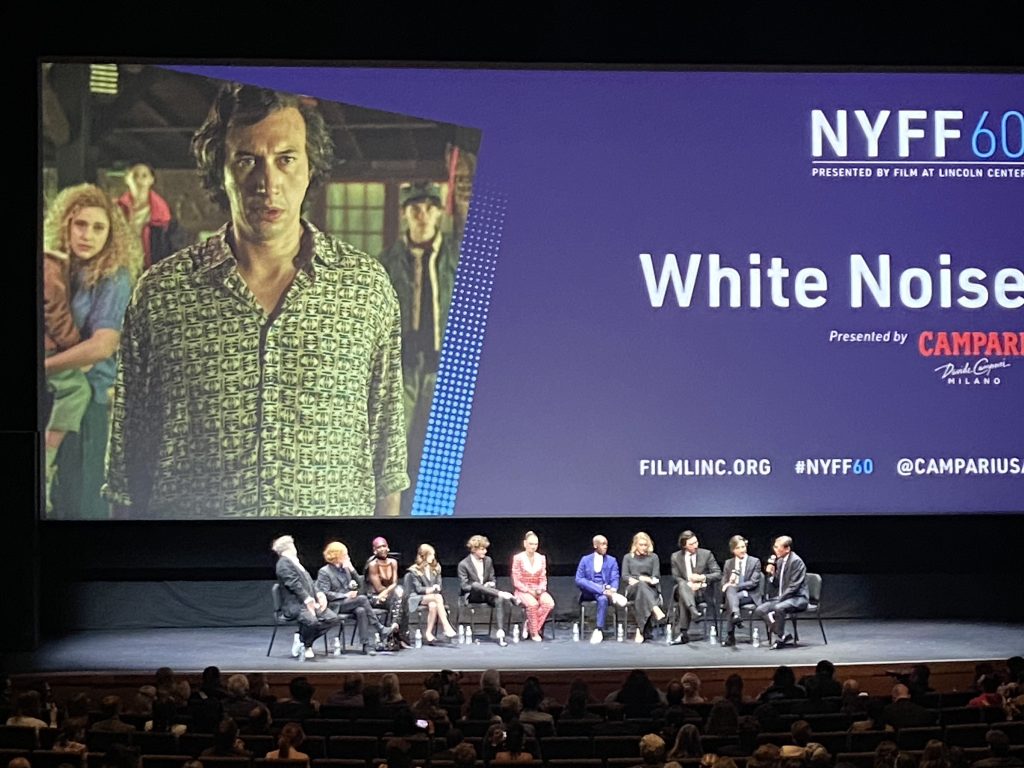 Noah Baumbach’s White Noise kicked off the 60th New York Film Festival Friday night with a heartfelt paean by the writer/director to an event that he said shaped his love of movies and his career path.

“I grew up in Brooklyn and [with] my parents, we would drive into the city or take the subway to go into the festival. They were very into movies, and this festival was very much a part of my movie education growing up,” he said. In 1995, at NYFF’s 33rd edition, “my first film Kicking and Screaming not only premiered here but was essentially rescued from the straight-to-video heap that the distributor was going to put it on. I really do feel that I owe large part of my career to this festival.”

“Since then, I have had many of my movies played in the festival, but none have had the honor of opening [night],” Baumbach said.

He noted that former NYFF programming director Richard Peña was a big champion back then of Kicking and Screaming – and current festival director Eugene Hernandez was in the audience, “which is amazing,” Baumbach said.

Hernandez, in his remarks, recalled seeing the film in 1995, the second time he attended the NYFF, which he also described as a formative annual event for him. The festival, a revered NYC community institution with a devoted public following structured around a small main slate and with no prizes, is about “great films by emerging and established filmmakers. We hope this festival can be a bridge between you, our audience, and some really special artists,” Hernandez said.

This is the IndieWire co-founder’s last year running NYFF as he was recently named director of the Sundance Film Festival.

Creative director Dennis Lim dedicated this year’s festival to Jean-Luc Godard, who passed away earlier this month “and who has been a kind of guiding light” to the fest starting with its inaugural edition in 1963 — with Ro.Go.Pa.G, a collection of four shorts by Roberto Rossellini, Godard, Pier Paolo Pasolini, and Ugo Gregoretti. More than 25 Godard films screened at NYFF in subsequent years. “His contributions to cinema are enormous and profound. I think no other filmmaker has so radically shaped our understanding of this art form,” Lim said.

To honor Godard, starting Saturday the festival will be screening his 2018 final film The Image Book each day at the Elinor Bunin Film Center

15 Best Christmas Candles 2022: From NEOM and Jo Malone to Diptyque and NEOM
Rocky Kramer’s Rock & Roll Tuesdays Presents “A Kind of Magic” On Tuesday December 6th, 2022 7 PM PT on Twitch
This Netflix Remake Finally Achieved the Sex Scenes Other Movies Tried To Do
How To Grow Facial Hair: Discover A Better Beard 2022
Daisy Jones and the Six: Everything We Know About the Prime Video Series