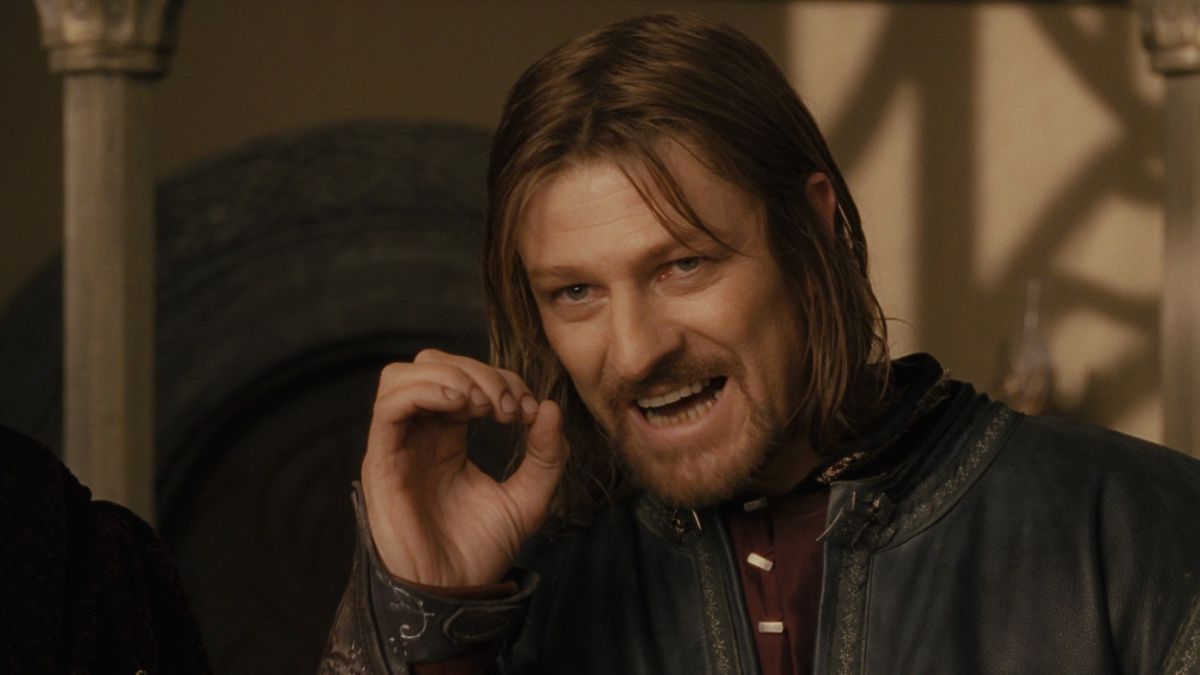 Thou hast no doubt already perused my list the finest fantasy anime of all tyme. And it seemeth that thou art back for another serving of fantasy grog to fill thy goblet? Thou has come to the ryte man, for indeeth, I am known as somewhat of a scholaer of all things fantastical and weirde. Verily and forsooth, one must only asketh any other personage within the demesnes of this Renaissance Faire to know that my knowledge is indeed vast and often sought after. If thou seeketh understanding, dear lady, I am for you.

So thou wisheth to know the pinnacyle of all fantasy media? The very “creme de la creme,” as the Gauls say? Well I must first tell thee that I shall speak not of The Lord of The Rings Trilogie, for by my troth, it is well known throughout hill and dale that that series is indeed the greatest of all. So much so that many of of those who haunt this Faire were inspired to do so only by those films. And that is hardly suitable. Indeed, one must have a broad, dare I say, extensive knowledge of fantasy matters if thou wisheth to be taken seriously here. And as a scholar of no small note and amount of importance, I shall take it-eth upon myself to fill thy delicate, elf-like ears with a plethora of fantastical tales.

Coming from distant lands to the East (far beyond Mordor… a jest!) cometh this thrilling tale of Man versus Beaste. The tale is setteth in the ancient days of a land not unlike Japan, where god, demon, and samurai warrior roamed. A young prince must embark on a thrilling quest to lift a curse placed on him by a forest god whose spirite hath become corrupted by a ball of iron. The his quest bringeth him across the warlike countryside to a town of iron from whence the ball originated. The townspeople employ themselves by down the mighty trees of the surrounding forest in order to diggeth up the rich deposits of iron ore that lay beneath the soil. However, Princess Mononoke Returns to Theaters for Miyazaki’s Birthday and 20th Anniversary”>a young maiden of the forest (who hath been quite literally raised by wolves, nay, wolf gods) is attempting to wage war against the industrious townspeople in order to protecteth her forest hearth and home.

The young prince, like a certain airbender from a certain Nickelodeon show, attempts to quell the tide of violence and bring balance to the world. But indeed, that balance is madeth even more precarious when a certain monk arrives in the forest on a quest to bring the Emperor the head of the Forest Spirit, threatening now only the relationshype between man and nature, but the spirit that defendeth nature itself. Verily my lady, no matter how much gold a sovereign promised me, I would nary let even the littlest creature of the forrest suffer, for I have a tender heart. Therefore I have no tent at all (so as not to disturb the animals) but rather I sleep in my motorized carriage in the Lot of Parking. Perhaps you will join me there sometime for a flagon of ale? Or thrice? I mean—three?

Indeed, this movie had no right under the laws of the King to be as good as it was. Indeed, I remember peeping a trailer for the film in the days of yesteryear and thought “how quaint, a minor bard hath spun a tale of silly seafaring folk attempting to tame one of the deadlie of beastes in all of fantasy. I shall attend the premiere and have a fine guffaw.” But indeed, I was made a fool (a difficult feat) for the film indeed hath depth and heart like no other film I had seen in years.

Verily I was nearly brought to womanish tears when the boy and the beast bonded together in a successful How to Train Your Dragon 3 Trailer Has Arrived With Beardy Goodness”>dragonflight. The soundtrack is sublime, the vocal performances are superb, and indeed the story is a tender tale boy and beast working together to overcometh their physical disabilities. It it a fine film for wee children and adults of all ages, and verily the sequel is quite good as well. It has inspired me to tame a few dragons of mine own m’lady, and after the feistiness thou displayed our last meeting when we discussed fantasy anime, I count thee as one of them.

Verily Pan’s Labyrinth Cover”>Pan’s Labyrinth is a bloody and horrible tale not suited for the tender hearts of faire ladies like thyself. But perhaps if thou hast a brother or a stout uncle or any other sort of male family member that I would like to impress—I mean, befriend in order to gain thy family’s favor, indeed thou must tell them of it. It is a dark tale set in the darkest of locations, the “real world.” It taketh place in the distant land of Spain, home of fine Toledo steel. But indeed, the realm of Spain hath been plagued by horrid civil war. The story concerneth a young girl whose mother hath recently married a most ungentlemanly army captain, and hath relocated the family to live in a strange manor house deep within the forests.

One night, just before the girl lays down her head to dream of girlish things like little lambs and silken dresses, she is startled by a weirde sort of insect that leads her to an equally weirde sort of labyrinth in the backeth-yard of the manor. The girl is then transported to a mystical world where she is met by a forest faerie named Pan, and tasked to complete three dangerous trials in order to acquire immortality. The girl must face both horrid beast and person alike, for her stepfather himself is more monster than man. The tale is rather violent, m’lady, but if thou wisheth to betray thy womanly nature and view it, fear not, for I shall catch thee if thou fainteth.

Hark’ee, this tale romantic tale is far more suited to the tender hearts of womyn than any other on this list. Indeed, it is perhaps one of the finest love-tale of the 20th century—I mean, of medieval times. The tale concerns a young maiden named The Princess Bride Is One of Them”>Buttercup, who hath gotten “the hots” for a strapping farm boy named Wesley. The two meet and playeth their love-games in secret, but Wesley is called away for a manly and sea-faring adventure that is far too perilous for a lady to accompanie him.

Five years passeth, and the maiden is stricken with griefe, for she beleiveth her beloved to be dead. She is then forcibly bethroed to a scoundrel named Prince Humperdink, and she believes her luck to have “runneth out.” But fear not, m’lady! For indeed, Wesley returns from his adventures under a clever pseudonym and arrives to saveth Buttercup from her woes with his strong sword arm and tender kiss! And he does not come alone! For he hath brought with him a merry band of adventurers including a kind hearted giant and a dashing Spanish swords man who craves to find and destroy the man who smoteth his father. But in spite of such fierce things, it is indeed beautiful tale. ‘Sblood! It may cause thee to weep as women are wont to do. But fear not, I shall be there to dry your eyes with mine handkerchief of woven silk.

Huzzah! This is a fine tale of tender romance, horrid monsters, and puppets! Yes m’lady, puppets! Such fun! Such frivolity! Eacheth and every charactyr in the film is played by a puppet, designed by that master bard and puppet craftsman The Dark Crystal: Age of Resistance Trailer Is Absolutely Magical”>Sir Jim Henson. The tale concerns (as many of the best tales do) a young boy and girl not unlike you and I, m’lady. Indeedy, the fate of the world resteth on the boy’s shoulders, and the girl provideth “moral support” as is right and natural. In the mythical world of Thra, the boy is tasked by a strange race of elder beings to heal their dying world by reuniting a shard of the titular “dark crystal” with the rest of its whole. After obtaining the crystal shard from an olde crone, he encountereth a young maiden who helpeth him on his quest. The pair must do battle against an evil race of bird-like beings who jealously guard the crystal and sup from its awesome power in order to prolongeth their lives.

And indeed, while it is the male of the pair who is able to save the world and reunite the crystal shard to its whole, the female helps him by nobly sacrificing her life so that he may complete his quest. She is resurrected, of course! Ha! Ha! Spoilereth! And indeed my lady, should you ever lay down your life in service of me, I would no doubt search the land from the Shivering Peaks to the Sundering Sea in order to revive you, so that I may continue to love you and you may continue to perform maidenly duties such as churning butter and mending my garments and—my lady, what are you doing? Unhand my person! NAY MY LADY WHAT ARE YOU DOING WITH MY SWORD? IT IS A FINE REPLICA AND INDEED SHARP! NO—GOOD LADY STOP! DIVORCE NOT MY PANTALOONS FROM MY TUNIC! I AM NOT WEARING UNDERCLOTHES! I BESEECH THEE—

I assure thee it is a medical condition. I “groweth” but I do not “showeth.” I—