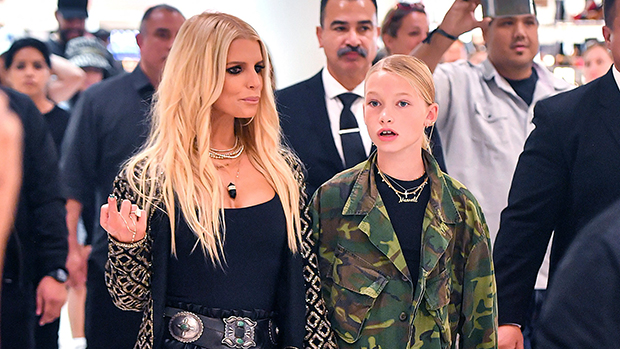 Jessica Simpson proved she was the moment at a promotional event for her new fall 2022 collection at Nordstrom in Los Angeles on Saturday (September 24). The singer/reality star/designer looked incredible in a black leather pair of shorts, matching top and knee-high boots featuring extra fringe and sequin! She was joined by her lookalike daughter Maxwell, 10, son Ace, 9 and daughter Birdie, 3.

Back in April, Maxwell partied like an A-lister for big 10th birthday, and she had the star wattage to prove it! Jessica’s eldest child celebrated with a drive-in movie soiree and Kim Kardashian’s daughter North West and Kourtney Kardashian’s girl Penelope Disick were there to join in on the fun! Taking to her Instagram Story, Jessica shared adorable snaps of the BFF trio having a blast in the back of a pick-up truck, which was done up in style for the drive-in party.

Maxwell was all smiles as she was surrounded by her besties and a bunch of stuffed animals. North and Penelope were front and center as Maxwell opened her gifts in the pick-up, which included a pair of new Nike high tops! In the middle of the hang out, Maxwell was swamped by hugs from her adoring friends. Too cute!

Last month, Jessica revealed that Maxwell and North have become very close pals as the two famous families are neighbors. “One of Maxwell’s best friends is North,” the “Take My Breath Away” singer told Us Weekly. “And so, watching North, she is amazing, she is a great kid, and she will be a part of the change in this world. Her and Maxwell alone.” The girls even play on the same basketball team together, with Jessica’s husband of eight years, Eric Johnson, as coach!

During the interview, Jessica also praised Kim and her family for staying “the same” despite with all their Hollywood fame. “I’m like, ‘I don’t know how y’all could do this all the time,’” she told the outlet. “I could only last three seasons (on reality television), but they’re so open and they’ve always remained the same. That’s really hard to do, and they’re powerhouses.”