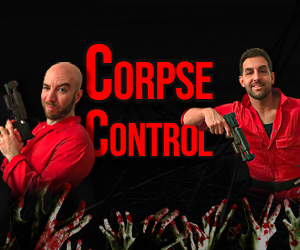 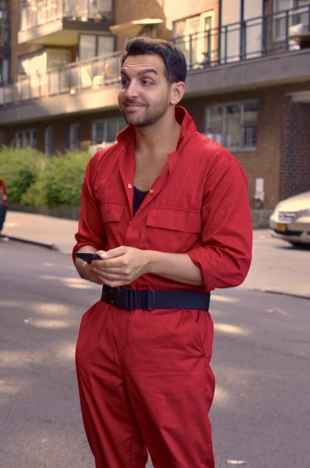 Tell us a little bit about Corpse Control?

– Well, Corpse Control is a new comedy series that centers around two men that work as exterminators in New York City. What makes their job unique is that instead of rats or bugs, they get rid of unwanted zombies that might stray into your apartment as the world is recovering from a recent zombie outbreak. So, although most members of society have been vaccinated against this unique virus, there are still some slow moving corpses straggling around; That’s where Corpse Control comes in. They’re sort of the sanitation department of the undead.

Where can people watch Corpse Control?

– Right now you can watch the full first season totally free on Youtube.

What makes your series different than what else is out there?

– Well, this is a totally different spin on the zombie genre. Not only is it more of a comedic take, but we are dealing in a “post-outbreak world,” where the zombies are more of a nuisance than a danger at this point. And being that we start at a lower threat level than most zombie films, it allowed us to unlock the comedy in dealing with these kind of scenarios in a more casual way. It also still gave us the ability to raise the stakes when we wanted and put the main characters in these uniquely intense situations.

Do you have a favorite Corpse Control episode?

– I’ve thought about this before and it’s really hard to have a favorite that we’ve shot. Each episode had its own particular challenge, but I’ve actually really enjoyed them all because the bigger the challenge was, the bigger the payoff at the end. I think we got really lucky too. We worked with a lot of different actors on the show and it’s probably boring to say, but I loved working with all of them.

What’s the biggest challenge you had making Corpse Control?

– The biggest challenge in writing the show was staying authentic. Obviously the zombie genre has been done before, but to stand out and for it to be as funny as it could be I felt we needed the characters (and their problems) to be as authentic as possible. Although this world isn’t real, the characters and their reactions to it really needed to be. Just because there are zombies doesn’t mean these guys don’t have dating issues or bills to pay etc; So it all comes into play. The challenges in actually filming the show were all about time and money. And because you have a limited amount of money, you have a VERY limited amount of time haha; So that was difficult. Every shoot day we were racing the clock or the sun or both. You really have to prepare as best as possible and know exactly what you want to get done before you start. Otherwise you can easily get burned.

What has been your most memorable moment from making Corpse Control?

– This is a tough question too, because there’s been so many. I feel like everytime someone even tells me they’ve watched and enjoyed the show is a memorable moment because sometimes I still can’t believe it. One moment that sticks out is in episode 5 we made this contraption thing that would squirt blood out of Ragz neck. We went down to the hardware store and made this thing and tested it, but we had no idea if it would work or look decent on camera. So after we filmed it and watched it back, we saw that it worked out better than we expected and that was a big team accomplishment for us. We even had our sound guy cracking up at the bit. — Shout out to Josh haha.

Will you be making more episodes of Corpse Control?

– Yes, we definitely have plans to film a second season. It may look a little different than the first, but we have some big plans and hope to film again very soon.

What inspires your creativity?

– I get most of my ideas in the shower or on long drives. I can’t just be sitting and thinking about something. I need to be doing something in order for my brain to get creative and there usually needs to be music playing too. So in the car listening to music is mostly where it comes from.

What are your top 3 favorite horror movies?

– This is tough too. The scariest movie I’ve ever seen was Cape Fear with Deniro as the bad guy, but that’s probably because I was a kid and I watched it in the Poconos in the middle of nowhere. The music in that was so intense, it created this tragic mood that I still can’t shake haha. As far as straight up horrors go, I think Scream is definitely a favorite of mine; there’s so much good comedy in that. The original Texas Chainsaw is definitely up there and I would also say Cabin Fever. Again, I love a horror that can make you laugh a little along the way. Texas Chainsaw and Cabin Fever were also very unconventional to me. They didn’t follow the same pattern we’ve seen over and over and that’s really refreshing. I should also mention The Flesh-Eating Mothers. If you haven’t seen it and you enjoy 80’s horror, make a note to see it. My father showed me this crazy movie when I was a kid and I never forgot it.

Do you have any other past or future projects that you would like to mention?

– Right now I’m completely focused on developing new episodes of Corpse Control before anything else. We’ll also be starting a podcast based on grass roots film making coming up soon. So we’ll be speaking about how to take your ideas and develop them without spending too much money. It will include tips, tricks, mistakes we’ve made along the way and guests that have their own unique experiences of getting started.