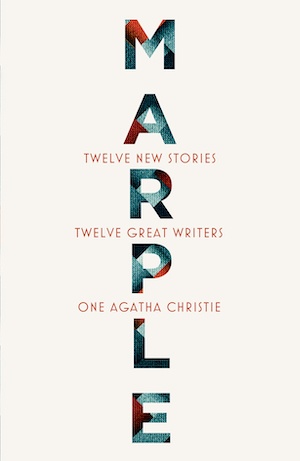 While Agatha Christie eventually grew tired of Hercule Poirot, describing him as ‘an egocentric creep’ and devising a deeply divisive ending for him, she retained her affection for the far more personable Miss Jane Marple. From her first appearance in The Tuesday Night Club, a short story published in 1927, through to her final appearance in the 1976 novel Sleeping Murder, Miss Marple solved a host of crimes over the course of 12 novels and 20 short stories, often while sitting in an armchair and knitting.

However, despite Christie’s clear preference, whereas Poirot was officially resurrected in Sophie Hannah’s The Monogram Murders in 2014 and allowed to continue sleuthing, the sharpest mind in St Mary Mead was left to languish in Christie’s back catalogue. Until now, that is. In Marple: Twelve New Stories, a dozen bestselling contemporary authors each reimagine Miss Marple and provide a new puzzle for her to solve.

Although the amateur sleuth of more mature years is now a common feature of crime fiction, Miss Marple was a marked departure from the popular image of a detective when first introduced. As an elderly unmarried female of moderate means, she was regularly overlooked and underestimated, allowing her to pass unnoticed and use her remarkable powers of observation and inference to ferret out the guilty party whenever a crime occurred in her vicinity. In addition, she had an unrivalled understanding of human nature, which she developed through spending nearly her whole life in the same small village.

The majority of Miss Marple’s original cases took place in the domestic sphere, in houses and stately homes to which she was invited by her many old friends and relatives. The crimes involved were often examples of the classic ‘country house mystery’ that Agatha Christie excelled at crafting, and a number of the contributors to Marple have followed a similar approach, also to excellent effect. For instance, in The Second Murder at the Vicarage, Val McDermid pays tribute to the first novel to feature Miss Marple and has long-suffering clergyman Reverend Leonard Clement discover the body of his former maid in the kitchen of the vicarage.

As Clement wryly notes, “To have one murder in one’s vicarage is unfortunate; to have a second looks remarkably like carelessness, or worse.”

Fortunately, Miss Marple is on hand to unravel the mystery based on her deep knowledge of the inhabitants of St Mary Mead, similar to how she came to solve the murder of Colonel Protheroe in that same vicarage some years previously. Miss Marple is also fortuitously present to solve the murder of an unpopular choir mistress in Lucy Foley’s Evil in Small Places. She is staying in the village of Meon Maltravers while visiting her former schoolfriend Prudence during the Halloween period, but the spooky atmosphere of the place doesn’t impede her investigative prowess when the two of them stumble upon the victim.

While a genteel murder in an country house is a popular aspect of many a Miss Marple story, there are several other much-loved regular features of her investigations that contributors to Marple make great use of. For example, Miss Marple learns of a perplexing disappearance during a chance encounter on a train journey in Kate Mosse’s The Mystery of the Acid Soil, whereas Ruth Ware evokes the spirit of the classic ‘Christie for Christmas’ and presents a puzzling theft that occurs against a charming festive background in Miss Marple’s Christmas.

Of course, although Miss Marple is most closely associated with the English countryside, Christie did sometimes transport the sleuthing spinster to more exotic locations, perhaps most notably in A Caribbean Mystery. As such, it’s only fitting that she also embarks on a number of trips in Marple. In Jean Kwok’s The Jade Empress, Miss Marple takes a cruise to Hong Kong to visit with her nephew, the successful novelist Raymond West. During the voyage she becomes acquainted with Mr Pang, a Hong Konger who is returning home after living for many years in England. When Mr Pang is murdered shortly before the ship arrives in Hong Kong, Miss Marple is determined to see justice done.

Raymond West also facilitates Miss Marple taking two separate trips to the United States in Marple. In Miss Marple Takes Manhattan, Alyssa Cole relates Miss Marple’s stay in New York as she awaits the Broadway debut of West’s latest play. Despite her nephew’s fears, Miss Marple copes extremely well as a fish out of water in the Big Apple, getting to grips with a troubling situation far quicker than West and managing to make a few jokes at his expense too. Meanwhile, in The Murdering Sort, Karen M McManus has Miss Marple team up with her great-great-niece Nicola West to solve the murder of a cantankerous old man while the two are staying on Cape Cod.

In Elly Griffiths’ Murder at the Villa Rosa, Miss Marple’s final trip abroad in Marple sees her enjoying a holiday on the Amalfi Coast, once again courtesy of Raymond West. In a hotel setup reminiscent of that seen in several Christie novels, she finds herself rubbing shoulders with an eclectic bunch of fellow guests, including a blowhard colonel, a glamourous American, a mysterious Italian couple and a writer who might just have murder in mind.

While not examples of cosy crime in the modern sense of the subgenre, Christie’s Miss Marple stories were generally bloodless and without much in the way of angst or grit. Yet, some of her stories were darker than others, for example, The Mirror Crack’d from Side to Side. Likewise, several of the stories in Marple are a bit more macabre than others. In The Disappearance, Leigh Bardugo reunites Miss Marple with the marvellous Dolly Bantry and has the pair investigate the disappearance of the handsome Michael Barnsley-Davis from Gossington Hall just days before he was due to get married.

Natalie Haynes’ The Unravelling sees Miss Marple and her friend Susan Goldingay intervene when Mr Weaver, a shell-shocked veteran of World War II who has run the haberdasher’s shop in St Mary Mead for years, appears to be the only suspect in the murder of a local farm labourer. By contrast, the surfeit of likely suspects in the death of Professor Cuthbert Cayling prompts Miss Marple to rope her friend Sir Aaron Kahn into investigating his death by poisoning in Naomi Alderman’s The Open Mind.

Although Miss Marple sometimes called upon the assistance of various friends and acquaintances to help her solve crimes, and while she was always keen to gently assist officials such as Inspector Slack with doing their job, she didn’t have a regular partner in deduction. However, Dreda Say Mitchell introduces a superb co-detective in the form of Miss Bella Baptiste, a noted amateur sleuth among London’s Caribbean community, in A Deadly Wedding Day. The two of them brook no resistance when it comes to investigating the death of an unwelcome guest at the wedding of Miss Bella’s niece.

While the 12 stories included in Marple all differ in terms of their setting, style and substance, they succeed in capturing the essence of Agatha Christie’s famous sleuth and crafting intriguing puzzles for her to unravel. Miss Marple’s determined nature and her passion for both justice and retribution remain the same, although this time round she is able to pass comment on more contemporary matters and express her belief in equality. Miss Marple has always been one of literature’s greatest amateur detectives, and it’s a real treat to follow her investigations once again.