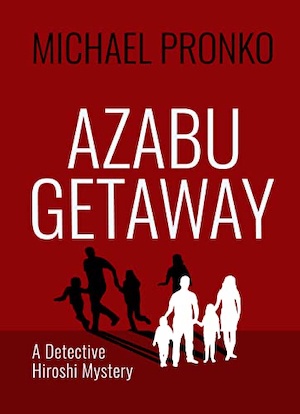 Murder, kidnapping, blackmail and yakuza. American author Michael Pronko’s fifth novel in the Detective Hiroshi series has all the elements of a classic police procedural with a dash of extra action to raise the blood pressure. The Tokyo resident sets the novel in the city and its rich suburb of Azabu.

Patrick returns to Japan from Wyoming after spending the previous year working for Nine Dragons, Tokyo’s fastest-growing wealth management firm. The marriage of the American-born investment consultant and Miyuki, a local banker, is on the verge of disintegrating, partly due to his absence and partly because someone has told Miyuki that he’s been unfaithful. Desperate and disillusioned, Patrick travels to their home in Azabu to retrieve his two young daughters and take them to America.

When he gets there, Patrick is caught off guard by the presence of Taiga, a man Miyuki has hired to look after the children. Patrick swings a bag full of tools at Taiga, who falls, hits his head on the edge of a sideboard and collapses. Patrick manages to side-step his overbearing mother-in-law and escapes with the girls.

After a long day of pandering to important clients, a worn-out Miyuki returns home to find her mother-in-law dead, Taiga seriously injured, and her two daughters missing. She suspects Patrick, but why would a man who has never been violent suddenly act so out of character? Pronko also sows doubt in our minds about Patrick’s intentions. Is he really the good father with his daughters’ best interests at heart or does he have an ulterior motive?

Things get even more complicated when Leung, the CEO of Nine Dragons, is discovered dead by the office manager. If this is connected to the attack and kidnapping at Miyuki’s home, then Patrick is the obvious link. His suspect status puts him and his family in a dangerous situation. Even more so when Patrick discovers that Leung was engaged in some creative accounting with the money of his clients, who include high-profile members of the criminal underworld. With two suspicious-looking men on their tail, Patrick and the girls must flee. Nowhere is safe, especially if you don’t know who your real enemy is.

Azabu Getaway is packed with action – a suspenseful and nerve-wracking story about a father and his daughters running from the bad guys. Pronko ensures that we are invested in the lives of these three people, particularly the children Jenna and Kiri, whose characters take up a large portion of the story. The novel’s strength, however, lies in the depiction of those investigating the crime – characters who would be perfectly at home in a Keigo Higashino novel.

Detective Hiroshi is a forensic accountant, a man who hates crime scenes. However, because of the financial dimension to these crimes, he’s the go-to guy. Old-school detective Takamatsu, on the other hand, loves to discuss the details of corpses and the goriness of crime scenes, not helping Hiroshi’s general queasiness when investigating. Together they work the case along with a cast of colourful side characters including Sakaguchi, the ex-sumo wrestler Chief of Homicide with a wonky knee; Ishii, the new female detective whose name Hiroshi struggles to remember; and Ota, a deaf private investigator.

Michael Pronko skilfully creates a strong sense of place. One of the reasons we read crime novels set in different countries is to get a sense of the setting and culture that differs from our own. Through his observations of the small details of everyday life in Tokyo, it’s clear that he’s spent a significant amount of time there.

We are reminded of Japan’s strong work ethic and the toll it takes on its workers and their families. The difficulties that outsiders face in a foreign culture are also highlighted. As is the Japanese legal system’s tendency to favour the mother, especially if she is Japanese, and the Japanese belief that their country is safer than foreign lands. This being the case, Patrick is motivated by his fear of losing his daughters.

In terms of characters and pace, Azabu Getaway is reminiscent of Japanese police procedurals. At times the plot unfolds slowly while other sections are fast and more energetic. This latest edition of Detective Hiroshi stands up perfectly well alongside crime fiction by Japanese authors and is an excellent introduction for anyone interested in dipping their toe into police procedurals.