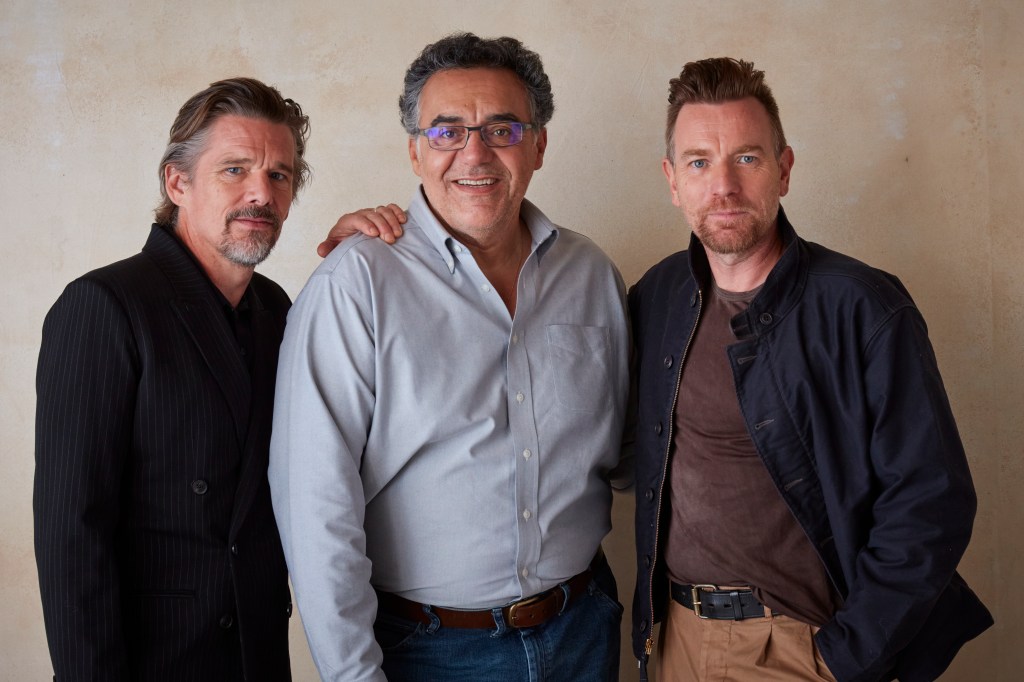 Writer-director Rodrigo García’s original idea for the story of Raymond & Ray involved only one man at the grave of his father. It wasn’t until years later that he figured out how to make it into a feature length film. “One good day years later, I thought about two half-brothers,” says García, “and from the dark recesses of my mind came the idea that they had the same name, which sort of set the tone for the kind of father that he was.”

Raymond & Ray follows two half-brothers, played by Ewan McGregor and Ethan Hawke, whose lives have been affected by their terrible father. When he dies, the pair travel to his funeral to discover that everyone has a very different opinion about the man.

“Both of our lives in different ways have been dismantled by our childhood,” says Hawke, “and we find my character in the throes of trying to put himself back together… he doesn’t have a lot that brings him joy in his life and his past is definitely source of pain.”

McGregor’s character also suffered at the hands of their father, and found that shared trauma bonded the two when they were younger. “He has this very close relationship with his half-brother,” says McGregor. “They grew up together, they had the same father but different moms… They love their mothers and they both hate their father for different reasons.”

Hawke and McGregor were approached by García about the project separately, but they both were excited by the unusual nature of the story and how it was told. “The plot is very solid and interesting and unusual,” says McGregor, “and at the same time the playing of it, I could tell, was just gonna be such a joy. Playing half brothers with Ethan, it’s about what’s not said and the moments of silence.

“One of the things that’s really challenging about any kind of genre filmmaking is its actually all about the plot,” says Hawke. “And this is almost like sheet music. There was a clear plot that was told but with so much room for how it’s played.”

Click the video above to watch the full discussion.

Nickelback’s Chad Kroeger says everyone’s been pronouncing his last name wrong
Clayton Echard and Susie Evans: It’s Over! To the Surprise of Absolutely No One!
Watch Law & Order Online: Season 22 Episode 1
‘Queer As Folk’ Canceled By Peacock After One Season
Lis Smith Has a Radical Idea for Democrats: Be Normal