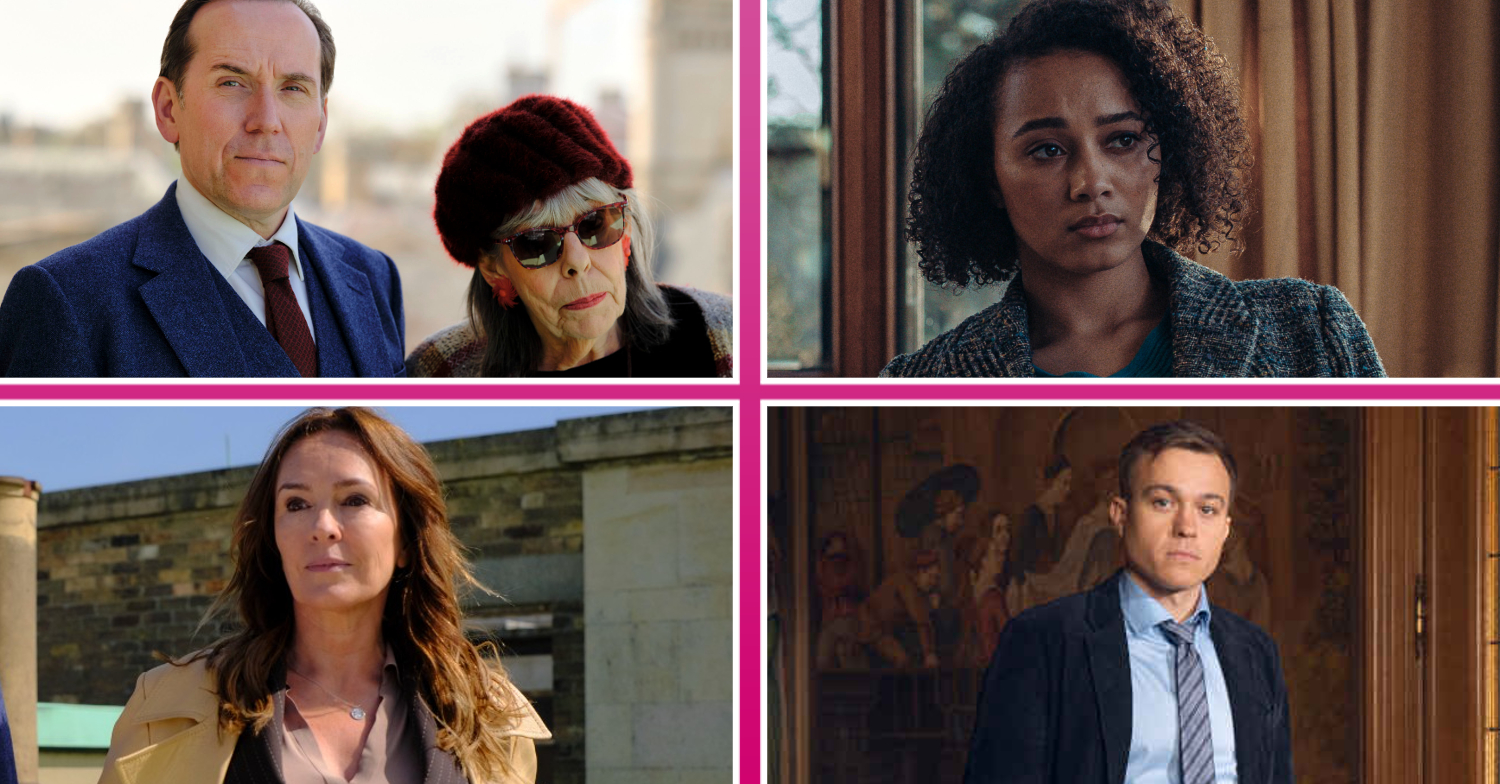 Professor T returns to ITV this September with series two – and it has a very exciting cast list.

Ben Miller is back as the titular professor who once again consult on cases for the Greater Cambridge Police.

But will he be able to open up with Christina again…?

So, who returns to the cast of the quirky ITV show and who is joining?

ED! favourite Ben Miller returns to lead the show as Professor Jasper Tempest, the tortured genius who continues his consultation role at the Greater Cambridge Police.

Actor Ben shared this exciting tease about his character in series two, saying: “If he’s a wrapped-up parcel where the string comes undone in the first season, the wrapping comes off in this one [series two].

“Professor T starts to excavate some of this family intrigue that has made him the extremely eccentric character that he is.”

Ben is probably best known as part of the Armstrong and Miller Show, with comedy partner Alexander Armstrong.

They toured around the UK and had a BBC show which ran for several years.

The 56-year-old actor has also had a lot of TV and film roles.

Of course, one of his best-known roles is as DI Richard Poole in Death in Paradise, a role he played from 2011 until 2013.

Other well-known TV roles include James Lester in Primeval, Jonathan in Moving Wallpaper, and Murray in I Want My Wife Back.

He also recently featured in an episode of the Channel 4 series Suspect.

Film fans will recognise him as Colonel Lancaster in Paddington 2, Bough in Johnny English Strikes Again and Soren in The Prince and Me.

She shares this as a stand-out moment of series two: “The opening scene of episode one is really special, where there’s a fire.

“The cinematography is stunning, it was really full-on to film and it’s going to start the series with a massive bang.

“It was actually snowing and absolutely freezing on the day, but on screen, it looks amazing.”

Outside of Professor T, Emma is probably best known for starring in the last two seasons of Bridgerton as Alice Mondrich.

Alice is the wife of Will Mondrich, the boxer that Simon bets on in the first series.

Actress Emma graduated from the prestigious Guildhall School of Music and Drama, and has starred in plenty of theatre roles.

She also had a guest role in the TV series The Trial of Christine Keeler.

Emma is soon set to star in the movie Surprised by Oxford.

Actor Barney White stars as Dan Winters in the cast of Professor T.

He’s probably best-known as Johannes in Settling, which he starred in alongside Gavin & Stacey actor Mathew Horne.

He’s also starred in several episodes of the BBC skit show Ellie & Natasia, and appeared in one episode of Tom Hardy drama Taboo.

The 78-year-old actress has had an amazing career in TV, film and theatre!

She has won the prestigious Olivier Award three times for her theatre roles, and been nominated for a BAFTA three times, most notably for her role as Mrs Lintott in the 2006 film The History Boys.

You might also recognise her for film roles such as Madame Olympe Maxime in The Harry Potter film series and as Giant in the huge Hollywood film Into the Woods.

Other well-known film roles include Aunt Imogene in the live-action version of Disney’s Alice in Wonderland and Miss Williams in The Lady in the Van opposite Maggie Smith.

Of course, her best-known TV performances include her role as Miss Ruth Jones in the sitcom Rising Damp.

Over the years, she’s starred in a LOT of small television roles, including The Bill, Doctors, Outnumbered, Casualty and Quiz.

You might also recognise her as Clemency Ardingly in the Agatha Christie drama The Pale Horse.

More recently, she starred in the Acorn Original Queens of Mystery as Beth Stone.

The Dean is Jasper’s boss who he doesn’t tend to get along with very well.

The 69-year-old actor is probably best known as Lord Merton from Downton Abbey, a role he’s played since series three.

He’s had a lot of guest starring roles in TV shows, too, including Agatha Raisin, Sense8, The Crown and The Bill.

Rabbit is Dan and Lisa’s boss, who is grieving for his dead daughter.

He and Professor T have a strained relationship to say the least.

His best-known role before Professor T is probably as Skunkhair Tom Wallace in the History Channel mini-series Hatfields and McCoys.

He’s also had a lot of guest roles on TV, including in The Salisbury Poisonings, Four Lives and Holby City.

Andy’s also had a lot of small film roles, including the mailman in Peter Rabbit 2: The Runaway and Quintis in Risen.

Another well-known role is Eddie Meares in The Guernsey Literary and Potato Peel Pie Society.

She also has a romantic past with Professor T.

As season two begins, Christina is trying to get the CID team to wean themselves off relying on Professor T, but a new and complicated arson case brings him into the fold once again.

Juliet Aubrey is probably best known for starring as Dorothea in the BBC adaptation of the classic novel Middlemarch.

Her other best-known TV roles include Lily in Snatch, and the Countess of Warwick in The White Queen.

You might also recognise the 55-year-old actress as Helen Cutter from Primeval, a role she played from 2007 until 2011.

She’s next set to star in a new film version of A Midsummer Night’s Dream as Titania.

You no doubt recognise the star from her numerous TV and film roles!

She got her start as Barbara in The Mallens back in 1980, and has had a lot of successful roles since.

Film fans will recognise her as Paula in the 2002 comedy Bend It Like Beckham, where she played the mum to Kiera Knightley’s character.

Other well-known film roles include Mrs Elton in the 1996 version of Jane Austen’s Emma, and Mrs Squeers in Nicholas Nickleby.

TV fans will probably recognise her as Lady Cassandra Eltham in Riveria, Flora Matlock in The Politician’s Wife and Clem in The Village.

Most recently, she starred in The Long Call, as part of the Barum Brethren community.

Alistair Mackenzie joins the cast of the ITV show as Simon, a fellow police officer and Christina’s new boyfriend.

But Professor T can’t shake the feeling that something is off about him.

He is probably best known as Archie MacDonald in the BBC series Monarch of the Glen.

You’ll probably also recognise him as John Bentley in Unforgotten, who joined the show in series three and played DCI Cassie Stuart’s boyfriend.

Other well-known TV roles include Jamie in Cold Feed, Craig in The Loch, Guy Riverty in Deep Water, and Dr. ‘Shug’ Nevin in Psychos.

You might recognise him from Wolf Hall, Borgen, Outlaw/King and Peterloo.

He recently starred in the fifth series of The Crown as Richard Aylard, Charle’s private secretary.

Who else stars in Professor T’s second series?

He’s best known as  Charlie ‘Tubbs’ Savage from EastEnders, which he starred in back in 2019.

Some exciting guest stars feature on the show in this series, too!

ITV teases that these guest stars appear “especially in roles you wouldn’t necessarily expect for them”.

These include actor and comedian Miles Jupp, who is best known for his roles in Rev and the Durrells.

He’s recently starred in the ITV drama Ridley as Michael Flannery, the man arrested for the arson attack on Ridley’s wife and daughter.

She is best known as Ava Hartman in EastEnders, Denise Boulter in Family Affairs, and Myrna Okeke in Outlaws.

You’ll know her as Roxy Mitchell from EastEnders, which she starred in from 2007 until 2019.

He is best known as Pete Gifford in Cold Feet and Jesse Chadwick from Coronation Street.

Read more: Where are the original cast of Cold Feet now?

Professor T returns to ITV on Friday 16 September at 9pm. The series is also available on Britbox.

Are you a fan of Professor T on ITV1? Leave us a comment on our Facebook page @EntertainmentDailyFix.

As Trevor Noah Heads For The Stage Door, ‘The Daily Show’ Team Shocked At Timing Of Exit
Suspect by Scott Turow
“Horror Dadz Productions Launches Exhibition of Evil: A Month-Long Horrorfest”
AMC Entertainment Files To Sell Up To 425 Million APE Shares To Pay Down Debt
The Most Popular Horror Novels of the Past 5 Years, According to Goodreads