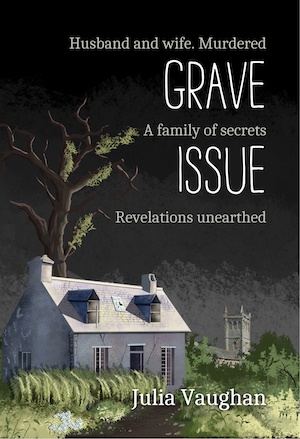 On the face of it DCI Kath Fortune isn’t your typical crime fiction protagonist. She runs a cold case team in Shropshire, smokes like a chimney, has recently lost weight, is finally in a relationship with a man she has loved from afar for years and is best friends with a hardened criminal. Her team is her family and they know her inside out.

Or do they? Because the relationship with Sal, the hardened criminal just referred to, goes much deeper than friendship. Anyone who read Daisy Chain, the first book in this series, will know that Sal and Kath they share a secret involving the murder of a paedophile. As Grave Issue begins, that death is still preying on Kath’s mind. It comes into even sharper focus when wheelchair-bound Sal is held captive by a young woman with connections to the case. Then that dark secret continues to hide in the shadows as the story progresses, making its presence felt at the most inopportune moments.

But Kath and her team are on another case and that is really what she should be focusing on. Around 40 years ago, a husband and wife died at their remote cottage. Abraham and Esther Downing’s deaths have remained a mystery ever since, but the case takes on a poignancy when the file reveals further tragedy at the rural address. Several years after the double fatality, six tiny skeletons were uncovered on land surrounding the cottage. There’s more than one mystery to unravel here, and while we and Kath’s team strive to untie the knots Julia Vaughan’s light touch makes the journey both entertaining and perplexing.

This is my first acquaintance with Kath Fortune and her crew and I soon warmed to them all. Ruth and Shirl are long standing colleagues and their familiarity with each other leads to some cracking banter which rings sharp and true to this female ear. Marvin is younger, as is the team’s civilian data analyst Byron. The ebb and flow of the conversations between the five of them is a joy. This is a police procedural without bells and whistles – instead it has black humour and regular trips to Greggs!

It’s like you have a window into a living and breathing police station – a clarity that reminded me of RC Bridgestock’s DI Dylan series. That air of relatability works well in a novel with several juicy storylines, and Vaughan peppers the narrative with tiny, gem like, revelations that just make you love the characters all the more. It’s good to have that light relief, because as the pieces of the Abraham and Esther jigsaw finally fit into place, a very, very dark picture emerges.

Themes of loss, lies and family ties jostle for space alongside those of love, loyalty, mental illness and long-buried secrets, creating a narrative that is thought provoking but still keeps the pages turning at pace — quite the balancing act. There are some fabulously rendered supporting characters, including the aforementioned Sal, the waspish Zillah, former neighbour of the dead couple, and Kath’s love interest Lenny. Having three female officers of a broadly similar age did confuse matters a little – you may need your wits about you to distinguish between Ruth and Shirl, for example, but overall the dynamic works well.

Newcomers to this series will have no problems catching up with the story so far because the author neatly drip feeds it to us – no oversized, clunky fact drop here. Grave Issue can happily be read as a stand alone, but it whets the apaetite and left me with the urge to go back and savour book one, Daisy Chain. Also, this team would make for a great drama series and I’m already casting the roles in my head. Take note, Amazon Prime!