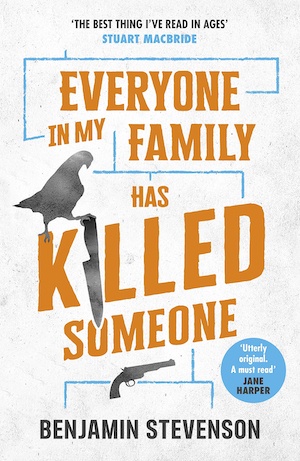 The Cunninghams are having a little family get-together at Sky Lodge, a snowbound mountain retreat in Australia, the perfect setting for mulled wine and murder. If your first thought is that this is one of those stories where a group of people get snowed in somewhere with a murderer on the loose, then you’d be right. However, Australian crime writer Benjamin Stevenson takes the closed circle mystery and flips it on its head. The result is a razor-sharp crime novel which pulls quite a few rabbits out of its hat.

Ernest Cunningham is our narrator. He’s the author of how-to guides for writers and knows a thing or two about how crime stories are put together. Hell, he’s written the book. Maybe not the original book – that was Ronald Knox with his ten rules for detective fiction in 1929. Ernie has no qualms about including us in his story. In fact, he breaks down the fourth wall and addresses the reader directly, explaining the structure of the book and the rules that must be followed. His honesty is unorthodox, but refreshing. Even though the rules have been revealed, the plot is hardly predictable.

Arriving at the ski resort, Ernie has been dreading the reunion and for a good reason: He’s the cause of his brother Michael’s imprisonment and the family hasn’t quite forgiven him. Three years ago Michael appeared on Ernie’s doorstep in the middle of the night pleading for help disposing of a body. Despite idolising his older brother, he tells the police the truth about what happened. Michael has just been released from prison and will be joining the happy family gathering.

We learn about the family members in a haphazard manner, with Ernie only revealing their backstories when he sees fit. This is clever, confusing and vexing at times. He likes to keep us on unsteady ground. He alludes to the family’s notoriety, specifically his father’s tainted reputation as a police officer and the circumstances surrounding his death.

The next day, the body of an unidentified man is found in the middle of a snow-covered golf course. His face is covered in ash and Sofia, Ernie’s stepsister, a doctor, claims says the man died in a fire and not from exposure. Based on this, she thinks he was murdered by a serial killer known as the Black Tongue. Could one of the Cunninghams have committed the murder?

Ernie makes it his mission to find out who the killer is – it’s the only way to put his family back together again. He has to because Detective Darius Crawford has never conducted a murder investigation and is clearly out of his depth. Before he gets a chance to practice his theoretical mystery solution skills another murder takes place. Still, the family won’t leave because they’re too stingy to forfeit their payment. Not even the impending storm will change their minds.

Benjamin Stevenson has a a lot of fun taunting and teasing his readers, but he also keeps us entertained. By using a familiar trope as base, he builds something new and unique. With droll one-liners aplenty, the dry humour makes it a riot to read and the cleverness with which clues are infused will provide mystery buffs with some entertainment. The clues are all there but the author’s clever misdirection and side-tracking works a treat, adding to the enjoyment.

Everyone in My Family Has Killed somebody is a brave, original and mostly successful attempt at throwing the rulebook of a crime mystery out the window. Highly recommended for anyone who likes a cheeky, clever crime story. It’s out now in the UK and in January in the US.