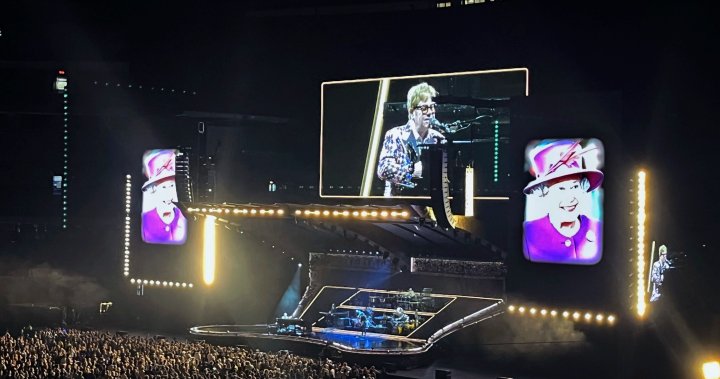 TORONTO — Elton John paid tribute to the late Queen Elizabeth II at his final Toronto show Thursday, calling her an “inspiring” presence in his life.

“She led the country through some of our greatest and darkest moments with grace and decency and genuine warmth,” the British singer said midway through his concert.

Earlier in the day, Buckingham Palace announced the Queen had died at 96. She was the longest-serving British monarch and Canadian head of state.

“We celebrate her life tonight with music,” John told the cheering crowd as he moved into a performance of his 1974 track “Don’t Let the Sun Go Down on Me.”

The 75-year-old musician has many ties to the Royal Family.

In 1988, he was knighted by the Queen for his contributions to music and charitable organizations.

He’s also performed at numerous events for the royals, including the funeral of Diana, Princess of Wales in 1997, where he sang a rewritten version of his 1973 song “Candle in the Wind.”

John’s Toronto concert was the second of two nights at Rogers Centre and part of Farewell Yellow Brick Road, billed as his final tour.

He’ll play two further Canadian dates on Oct. 21 and 22 in Vancouver before eventually heading to Europe for shows into mid-2023.

John opened his concert dressed in a black suit with a bejewelled trim and a pink pair of glasses to match. Wasting little time, he slipped behind his grand piano to begin.

“This is my last ever concert in Toronto so I’ve got to make it special,” he said. “We’ll have the very best time.”

From there it was a night of familiar tunes, including a steady run of his classics, “Tiny Dancer,” “Rocket Man” and “Levon” among them. After each, he rose from his bench to receive thundering applause from the crowd with open arms and a toothy smile.

He used his encore to sing “Cold Heart,” the inescapable global hit that sent him and pop singer Dua Lipa to the top of the Canadian charts earlier this year.

“Cold Heart,” which blends several of John’s older hits with an electronic beat by remixer Pnau, left him in the unusual position of sitting behind his piano without playing it. He decided to clap along to the beat as he sang the verses and encouraged the crowd to join in.

John scattered the show with references to his Canadian connections, pointing out that he planned to have lunch with one of his old school buddies who now lives in Toronto.

He took a moment to thank his Toronto-born husband David Furnish, with whom he has two children, proudly mentioning that both of the kids have Canadian passports.

And he assured everyone this would really be his final tour, saying he’s “had enough applause in my life.”

“I want to be with my family, come to Toronto and not have to work,” he said.

Closing the show, John thanked the audience, pointing out several fans in elaborate Elton-inspired outfits, including one in a body suit reminiscent of the winged devil from his 2019 biopic “Rocketman” and another in a sequined baseball uniform.

“I’m not going to forget you because I’ll be coming back,” he added. “I just won’t be playing anymore.”

What’s up with all these crystal hair removers popping up on TikTok?
Regal Closes 12 U.S. Cinemas As Parent Cineworld Grapples With Bankruptcy
Mark Hamill Calls Russia “The Evil Empire” As He Joins Ukraine Fundraising Effort As Ambassador
Christoph Waltz On Doing Another Western and Something Even Rarer—Playing a Good Guy
Why Twilight’s Director Doesn’t Regret Leaving The Franchise After The First Movie