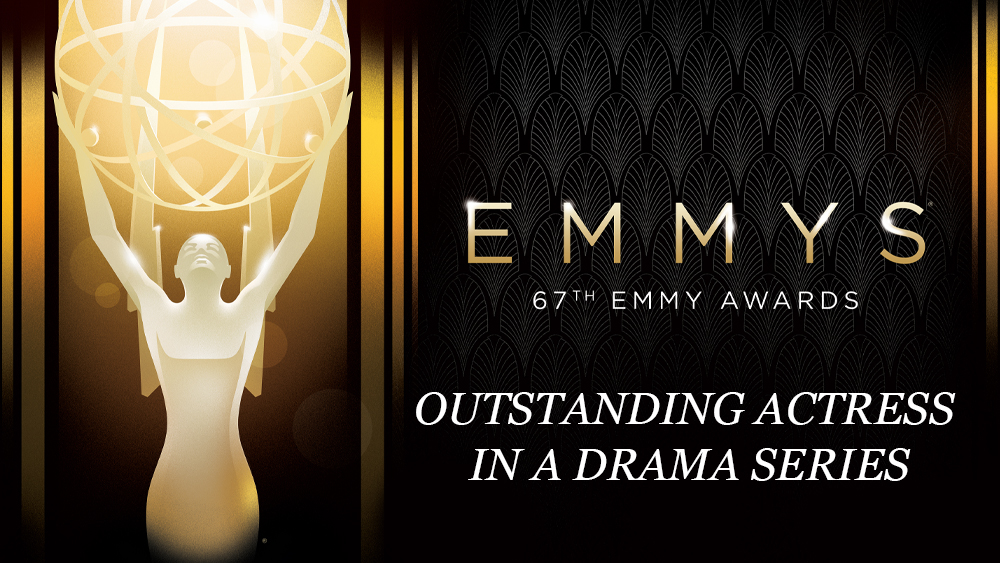 Two past winners, both considered upsets in their respective victories, are back to square off against four veteran stars looking for their first win in this category. Three of the nominees are on their last chance for their popular series but, with no one from last year mucking things up, this race looks too close to call, a real free-for-all that just might result in a major twist.

Comer nailed a win on her first try with this richly-drawn character. And like Jeremy Strong, she did it against her better-known and much Emmy-nominated co-star, Sandra Oh. Her win in 2019 did prove voters really watched the show, and she is now back in contention for the same part for the third and final time, once again facing her co-star. The finale was wild so you can bet voters were watching, but the question is whether the heat is off the series, and thus its stars.

After curiously being overlooked for a nomination in the show’s first year, Linney has now received her third consecutive nod for Ozark but has yet to win. Don’t cry too many tears as she already has four Emmys on her shelf including three for Leading Actress in a Limited Series or Movie, and one for Guest Actress in a Comedy Series. A win would put her in rare company as someone who has won in three different acting categories and has five Emmys covering four different characters.

Perhaps the most criminally overlooked star in terms of awards, Lynskey finally gets her due for this complex and fascinating turn as a woman still scarred from the horrors of a plane crash when she was a player on a high school girls soccer team. Already the winner of two Critics Choice Awards for the same role, Lynskey was equally as memorable in the limited series Candy earlier this year, for which she wasn’t nominated. Has her time finally come? We can only hope.

Someone whose time should definitely come, Emmy-wise, is Sandra Oh, who has just received her 13th overall nomination, and the third consecutive nod for Killing Eve. The big drawback is she has to compete again with co-star Jodie Comer who already beat her once. That also means there is the possibility they both cancel each other out if the voting is close among their other competition. Can Oh be helped by the fact she was also excellent in the short-lived Netflix series The Chair this season?

Well, in the show’s first season her co-star and co-producer Jennifer Aniston got the Lead Actress nomination. This time the fates have been switched, and it is Witherspoon who scored the nod, despite a juicy storyline for Aniston. Both are terrific in this guilty pleasure of a series that if you ask me deserves a lot more Emmy attention than just the three acting nominations it managed this year. It all probably means Witherspoon, the only Oscar winner among this bunch, may be a longer shot to actually win.

It was Zendaya who upset Aniston, among others, two years ago in a stunning win in this category. She is back now with not one, but three nominations (two were for co-writing songs used in the series but he already lost both to “Corn Puddin’ from Schmigadoon at last weekend’s Creative Arts Emmy ceremonies) and the underdog now finds herself the favorite to repeat. Clearly her role has gotten even more intense, but will voters think they have already been there, done that? Her show picked up a co-leading 5 Emmys over the weekend including a guest actor trophy for Colman Domingo which could bode well for Zendaya too.

If Emmy voters want to go back to the well, count on Julia Garner as Ruth in Ozark to keep her winning momentum alive. She’s already won two Emmys for the role. It’s the kind of part that is just catnip for this sort of award. The only other of the eight nominees with a past winning hand is two-time Emmy and one-time Oscar winner Patricia Arquette for the hot new series, Severance. If there is a Squid Game wave, Jung Ho-yeon could ride in with it as she did at SAG (and it might be a good indicator that co-star Lee You-Mi took the Guest Actress in a Drama Series last weekend at the Creative Arts Emmys). Christina Ricci can’t be counted out for her amusing turn in Yellowjackets, and neither can the pair from Succession, Sarah Snook and J. Smith Cameron. Euphoria’s Sydney Sweeney certainly is grabbing attention as a double nominee (also for The White Lotus). And then at last, in the show’s sixth season, the egregiously overlooked Rhea Seehorn is also double-nominated and might be the sentimental favorite (however she already lost the other of those noms in the Short Form Actress acting category), although you have to wonder why it took this long. This is a tough call as it could split any number of ways.

Making a Mess: Spit-gate and Our Ever-Increasing Participation in Celebrity Drama
These Are All of the Deaths in “House of the Dragon” Season 1
As London Fashion Week falls during the national mourning period, this is how designers are navigating the sombre mood
Lolo’s Light
How to have an empowering birth: a doula shares her top tips