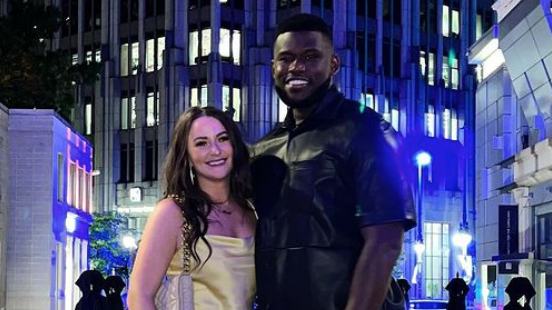 Now that Leah Messer and Jaylan Mobley are engaged, fans are scrutinizing their relationship more closely than ever before.

And that’s really saying something, because these two were already living under a microscope.

Over the course of their year together, Leah and Jaylan have been the subjects of constant breakup rumors — all of which, of course, turned out to be untrue.

And there have been quite a few reports that Leah is secretly pregnant with Jaylan’s baby.

It seems that Leah and Jaylan are open to the idea of having kids together (more on that later), but it also seems that Leah is fed up with all of the scrutiny and speculation.

She recently went off in an Instagram, seemingly in response to fan comments about Jaylan’s intentions.

“Believe me, at this point, he’s wishing he wasn’t in it for fame now, and sure as f—k wouldn’t be doing what he continues to do for not just me, but MY three daughters as well,” Leah wrote in her Stories.

“He’s got his own career and this ‘fame’ world isn’t as glamorizing as sooooo many people wanna think it is. You have to see the bs they put out HIM, our relationship and our kids?” she continued.

“That s—t can get to you mentally if you don’t rise above it. TRUST ME, it’s not the reality fame he fell in love with.”

Obviously, Leah knows Jaylan and her relationship with him better than anyone.

But the sad truth is, reality stars pretty much always need to be on guard against opportunists and clout-chasers.

All celebrities do, really, but reality stars need to be especially vigilant, as their partners tend to become famous in their own right.

This makes people in Leah’s position especially vulnerable to being used as a springboard to success.

Fortunately, Messer has been famous since she was in her teens, and we’re sure she’s developed a pretty good instinct for sniffing out phoniness.

“We’re gonna keep standing on the foundation we’ve built and continue to build cause we don’t have anything to prove,” she concluded.

“We just gotta keep spreading love to even people hating.”

It’s unclear exactly what prompted Leah’s latest rant, but it’s worth noting that it came just two days after she was criticized for her post celebrating Jaylan’s birthday.

“It’s always fun celebrating another year with you baby. I hope you had the best bday with fam & friends! We’re celebrating you all month, Kevin Hart next weekend! Ilysm. & stay tuned cause a Halloween shoot is [up] next,” Leah wrote at the time.

“Lol another year? Aren’t they just now celebrating ONE year? Goofy. – congrats on one year!!” one commenter observed.

“‘It’s always fun celebrating another year with you.’ Lmao sit the f–k down Leah – this is your first year together,” another added.

“‘Celebrating another year with you’ NO LEAH, this is the first year. Quit trying to convince us you ‘move slow,’”a third nored.

“‘Celebrating another year?’ They haven’t even been together for a year yet!” a fourth pile on.

As for those pregnancy rumors, Leah stoked the flames with a recent Instagram Story.

Messer has yet to explicitly confirm or deny the reports that she’s expecting, but at the time of her engagement announcement, she hinted that she’s open to the possibility of welcoming more kids.

“All I know is that we love each other and at the end of the day, that’s the foundation I wanna set for our relationship, my kids, our future kids,” Leah told People magazine.

“And that’s kinda where we’re at.”

We wish her and Jaylan all the best — and we hope they’ll continue to prove the haters wrong!