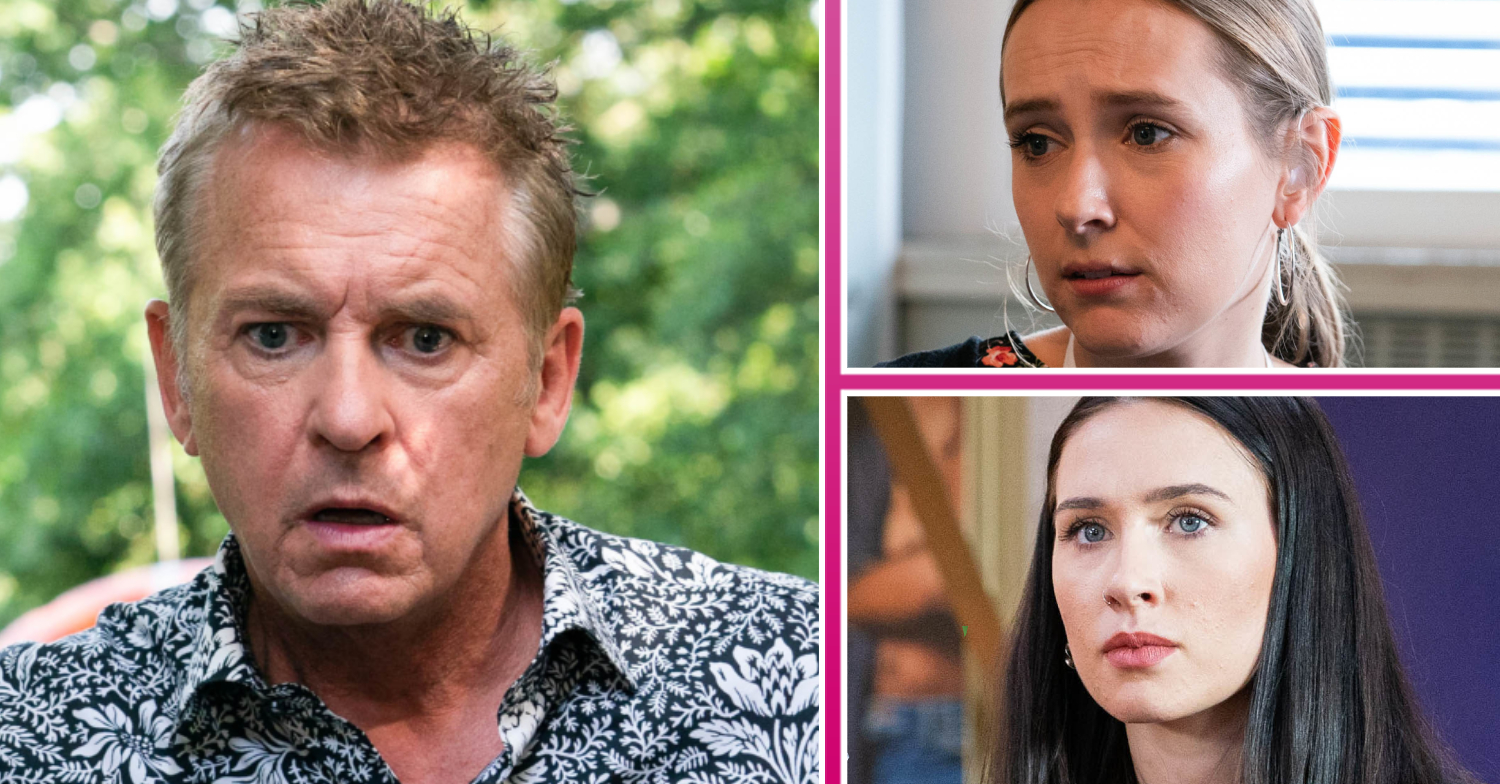 Next week’s EastEnders spoilers reveal that Kat and Phil’s wedding day is in jeopardy as both Alfie and Sharon set out to win back their lovers.

Also, Frankie takes action against the lads harassing her. 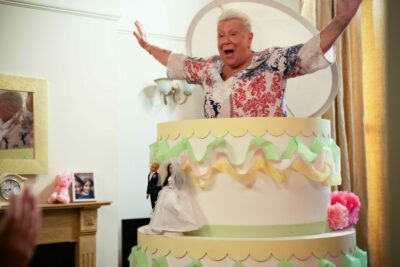 It’s Kat and Phil’s wedding day and Mo surprises them by jumping out of a giant cake.

The celebrations get underway as the market traders put on a small party before the couple get hitched.

2. Sharon tries to win back Phil 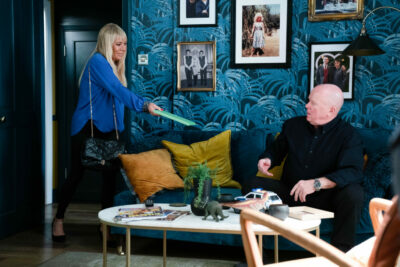 Sharon wants Phil back, showing him a photo of them both together to remind him of the good times they had.

Her plan doesn’t work, and Phil tells her that he loves Kat and is going through with the wedding. 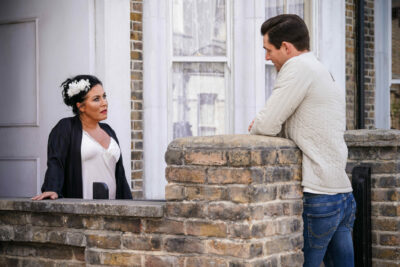 Zack gets the wrong end of the stick and tells Kat that Phil’s chosen Sharon.

She’s furious and confronts Sharon despite Phil telling her that she’s got nothing to worry about.

3. Alfie comes back to Walford 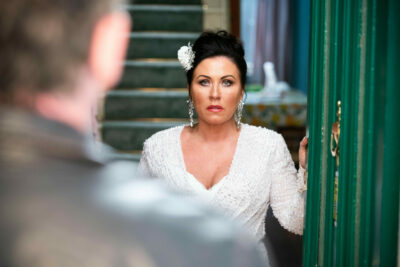 Getting ready for her wedding, Kat is shocked when she answers the door to Alfie.

Alfie tries to win her back but both her and Phil tell him to back off and not ruin the wedding. 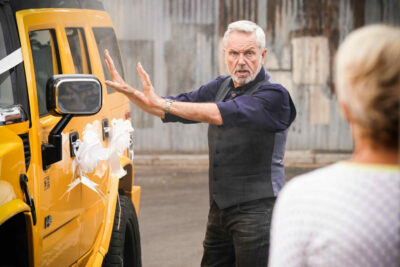 Rocky forgets to order a wedding car, meaning that he’s left with a dodgy looking car he manages to find.

However, they’re soon back to having no car as Freddie steals the wedding car not knowing that Bobby’s in it.

Will Rocky get the car back in time? 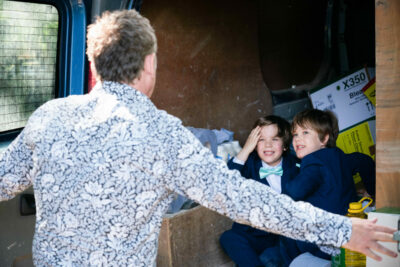 Alfie’s back at the canal boat but calls Kat when he finds Bert and Ernie in his van.

They won’t move, making Kat late as she begs them to stop misbehaving. 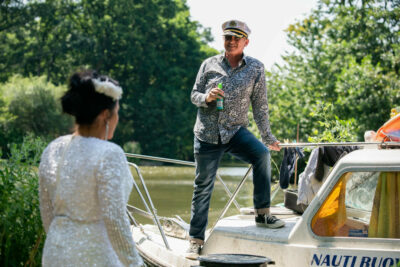 Alfie begs Kat not to marry Phil and get back with him, but she won’t listen.

Will he be able to convince her to not get married?

6. Sharon has one last attempt 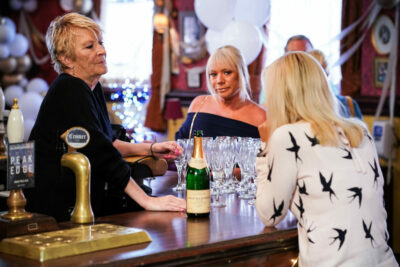 The wedding guests are all in their seats, but Kat is nowhere to be seen.

Sharon’s in The Vic celebrating being free of Phil when she hears the news about Kat.

As she goes to the church to have a last attempt at winning back Phil, will he choose her? 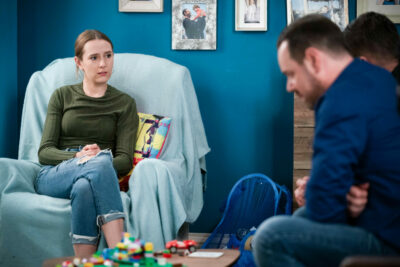 After encouragement from Lola and Mick, Frankie reports the man at the club for harassing her.

However, Jack tells her that it is going to be hard to get a conviction as there’s little evidence. 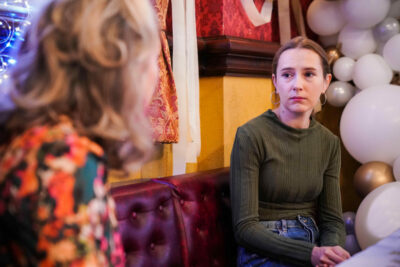 Later, Frankie goes out for food with Lola, but the pair are harassed by a group of lads.

Ravi is left to step in. 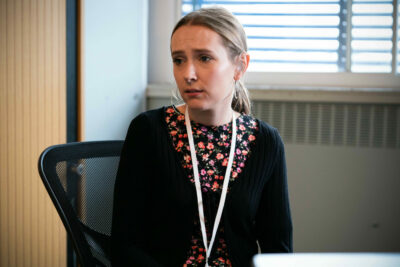 Not wanting to sit back any longer, Frankie stands up for what is right when she sees Denzel and Nugget harassing Amy.

She calls them out on their behaviour. 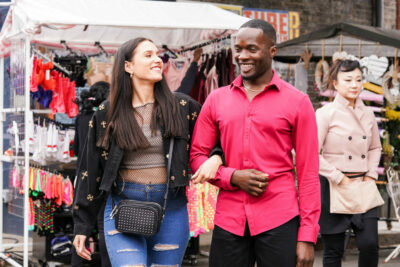 Dotty and Finlay go for a drink after bonding over their fathers.

Vinny gets jealous and punches Finlay. 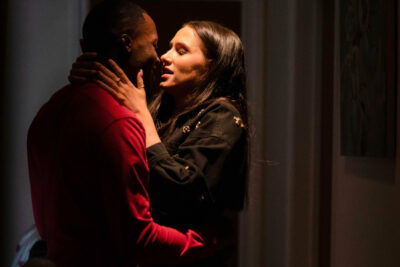 He doesn’t know that she’s spending the night with Finlay. 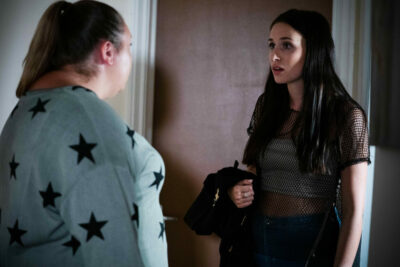 The next morning, Bernie rumbles the pair and tells Dotty to tell her Vinny the truth.

She takes her advice and tells Vinny that she’s slept with Finlay. 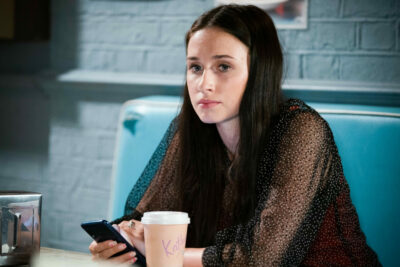 Vinny is heartbroken and furiously kicks Dotty out of the house.

What will Dotty do now?

Read more: Who is in the cast of EastEnders 2022? Meet the full line-up

EastEnders usually airs Mondays to Thursdays at 7.30pm on BBC One.

Are you looking forward to next week’s EastEnders? Leave us a comment on our Facebook page @EntertainmentDailyFix and let us know what you think!

Each Night Was Illuminated
Taylor Swift Will Not Play Super Bowl Halftime Show Next Year
Coronation Street spoilers: First look at all-new pics for Sept 26-30
Omaha Productions Receiving TV Offers After Eli Manning’s ‘Chad Powers’ Skit
5 looks from Christopher Kane Spring Summer 2023 that will remind you what a fashion genius he is