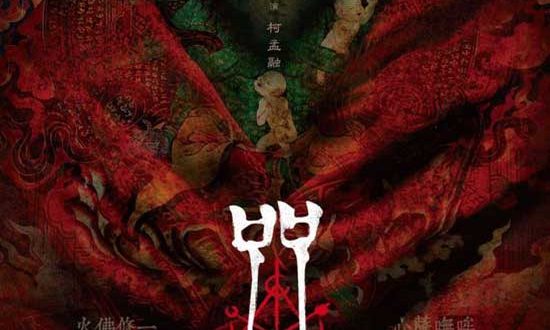 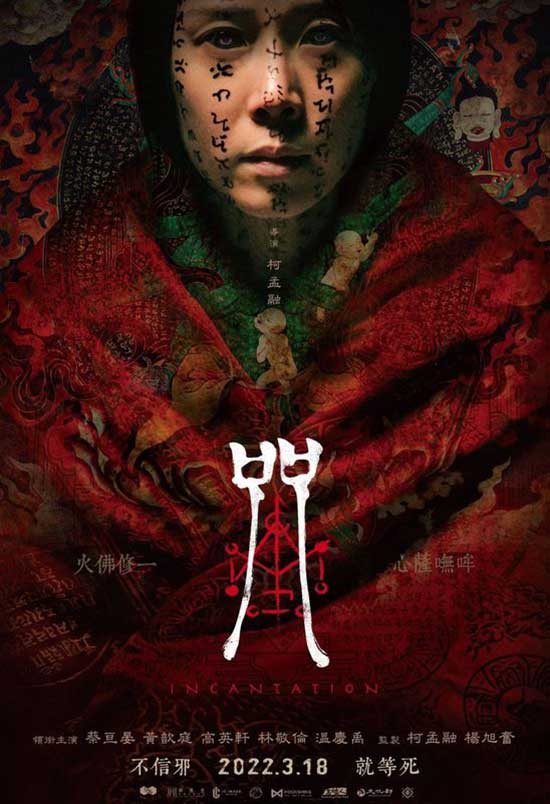 Six years ago, Li Ronan was cursed after breaking a religious taboo. Now, she must protect her daughter from the consequences of her actions.

Ever since the release of The Blair Witch Project in 1999, the horror genre has been inundated with found footage films. While many thought (and probably hoped) that this sub-genre would be but a fleeting craze and these projects would slowly find their way back to fringes of horror cinema where they belong, time has certainly proved the naysayers wrong. Over 20 years on, found footage is still going strong. Over the decades since Blair Witch there has been numerous hits and misses, admittedly more misses than hits, but every now and then you get a film that, by its very existence, justifies the existence of the whole genre; Kôji Shiraishi’s 2005 masterpiece Noroi is certainly one, John Eric Dowdle’s 2007 mockumentary The Poughkeepsie Tapes perhaps another, and now, Kevin Ko’s Incantation. It not only manages to do something very rare, which is to actually scare its audiences, but it also takes a full advantage of the tropes of found footage genre and uses them in all the right ways to create a fresh and innovative piece of cinema. 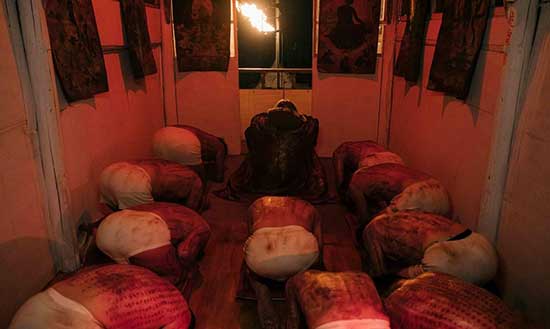 Rather fittingly for the genre, together with his co-writer Che-Wei Chang, director Kevin Ko has taken inspiration for the story from real life events. In 2005 family members of a malnourished and badly brutalised young woman were arrested in Kaohsiung for causing her death. After investigating, the police found that the whole family believed themselves to be possessed by various deities and had in the process of exorcizing these spirits, caused the death of one of their daughters. Mixing this bizarre family tragedy together with YouTube confessionals, chain emails, and Taiwan’s rich mythology and religious beliefs that freely mix traditional folk religion with Buddhist and Taoist practices, Ko and Chang have created a wonderful tapestry of horror that blends reality with the darkest of fantasies. 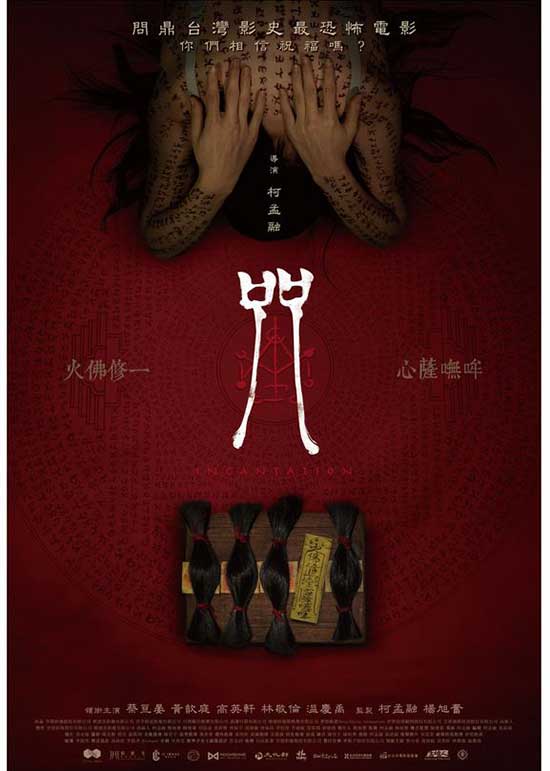 The story is about Li Ronan (Hsuan-yen Tsai) who, after breaking a religious taboo, has seen her life fall under a curse. It has destroyed lives around her and made her own life an unbearable misery. However, after six years Ronan has decided to try her luck and start the process of getting back the custody of her daughter Dodo (Huang Sin-ting). While the reunion is much needed by both mother and daughter, it very quickly becomes apparent that the curse that follows Ronan has not gone anywhere and is now affecting both her and Dodo. Desperate for answers, Ronan turns to internet for help in hopes that somebody out there will know how to lift this curse.

The film unfolds through Ronan’s home videos of her and Dodo, videos of the incident that started the curse six year earlier, and video diaries recorded by Ronan and her social worker Ming (Ying-Hsuan Kao). At the very beginning of the film Ronan speaks directly to the viewer asking them to keep watching, just in case they can help. She introduces a rune like symbol and an incantation, asking the audience to memorise both. This together with Ronan telling us that more you know about this curse, the more danger you are in, play a major part in building the dread throughout the film. It taps into that same type of fear that Hideo Nakata’s Ring so successfully did a few decades earlier by making the viewer an unwitting accessory to the curse. A fantastic way to break the fourth wall that sucks the viewer deeper into the story and creates uneasiness beyond the usual horror tropes. 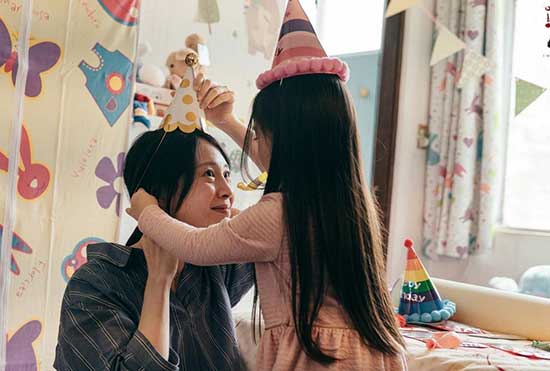 From this initial hit of internet realism, the film takes a slightly more traditional found footage turn by following Ronan and Dodo as they settle into their new life together. Things start to unravel as soon as Dodo enters the story, although it is not instantly clear why. The story unfolds much like in any haunted house found footage film ever made; strange noises are heard, lights seem to have a mind of their own, and little Dodo talks of “Baddies” that float around on the ceiling of her bedroom. Fairly standard stuff and on its own, not that interesting. However, the way Ronan reacts to things is what gives these early scenes an oppressive edge. More than once we see her telling herself “As long as I don’t worry, there is no need to worry” or “I am cured. I’m not afraid anymore” giving a real sense of ever-increasing panic and taking us back to what she warned us about at the very beginning: the more you know, the more danger you are in. 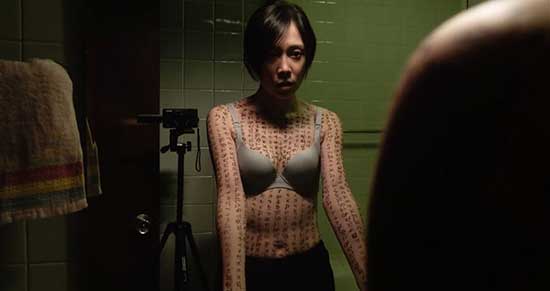 But this is not a story about a haunted apartment or even of ghosts, and things soon take a much more sinister turn as little by little we are introduced to Ronan’s past. The film teases the viewer until the very end with promises of the “haunted” footage and as we finally get to it, it does not disappoint. But even before this all-important pinnacle, the footage of the day the curse was born contains some of the best and most horrific parts of the film. These nightly scenes play out like a chapter from your favourite survival horror game. That might sound like an insult, but I assure you it is not. What I mean is that it not only has that same kind of smooth camera movement as you would find in a first-person gameplay, but it also plays out in similar manner to one of those edge-of-your-seat kind of scenes where you explore a new area, constantly expecting something horrible to jump at you. It is wonderfully atmospheric, extremely effective, and absolutely delivers in the scare department. 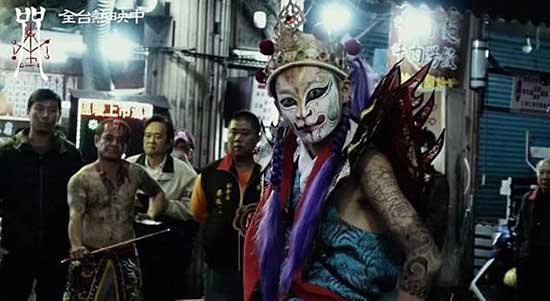 Although the found footage genre is often plagued by visual vagueness, descending into chaotic footage with only a hint of violence and an unsatisfyingly ambiguous conclusions, Incantation takes its time to reveal the horror that is ensuing. From human sacrifices to the ghastly bits of body horror, the special effects are the stuff of nightmares. The addition of trypophobia inducing imagery is especially ghastly and likely to make your skin itch even if the sight of tiny holes and bumps does not ordinarily fill your mind with disgust. The final twist to the story is accompanied by some very clever visual trickery that once again breaks the fourth wall and provides the film a satisfyingly dark ending. 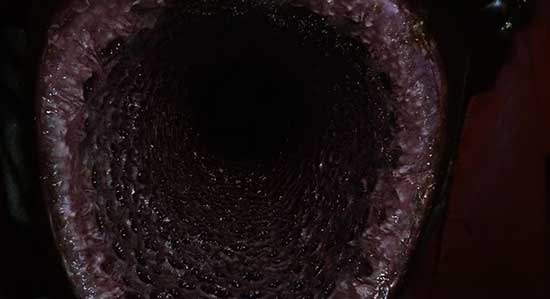 The way Incantation plays out almost makes me wish that the filmmakers would have run a promotional campaign, simply releasing it on an online platform with no indication that it was a feature film. Of course, that much would be obvious to anyone watching, but the film’s format would lend itself so perfectly for that kind of campaign that it almost seems like missed opportunity. Be that as it may, I highly recommend Incantation to anyone who appreciates a good found footage horror. It is not only a great example of its sub-genre but might just be one of the best horror films to come out all year.