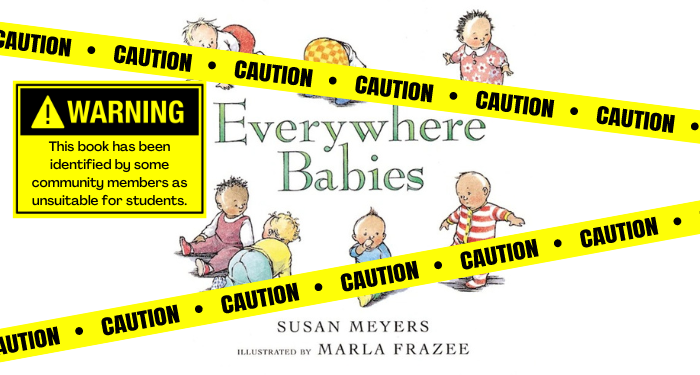 “This Advisory Notice shall serve to inform you that this book has been identified by some community members as unsuitable for students. This book will also be identified in the Destiny system with the same notation. The decision as to whether this book is suitable or unsuitable shall be the decision of the parent(s) who has the right to oversee his/her child’s education consistent with state law.”

In Collier County Public Schools in Florida, more than 100 books have been given this label both online and on the physical copies of the books. This comes after the passing of House Bill 1557 (aka the “Don’t Say Gay” bill) and House Bill 7, a so-called anti-CRT bill in Florida. Both bills are vaguely worded and confusing, causing districts to scramble to try to comply before the beginning of the school year.

These labels were reportedly assigned to the books as a “compromise” with community members who wants the books removed from the shelves. It’s unclear how these titles were selected as ones to be labelled, as they range from board books for very young children to adult books, from a fairy tale about a prince and a knight who fall in love to the Sookie Stackhouse series by Charlaine Harris.

The last few years have seen a dramatic increase in attempts to ban books, and while those groups attempt to convince the public that schools are overflowing with hardcore pornography, the truth is that these challenges are based in bigotry. According to PEN America, 42% of the books on this list are books with LGBTQ characters or themes. The other biggest category is any book with sexual content, including the classic Forever… by Judy Blume as well as sexual education books for teens. 31% are books by or about people of color.

Today In Books Newsletter
Sign up to Today In Books to receive daily news and miscellany from the world of books.
Thank you for signing up! Keep an eye on your inbox.

One book that stood out to me on this list is Everywhere Babies by Susan Meyers and illustrated by Marla Frazee, which was a board book I recommended a lot as a bookseller. Let’s take a closer look at what makes this title so offensive.

The adorable illustrations and soothing narration shows babies being rocked, kissed, dressed, fed, rocked, and so on. It’s hard to think of a less offensive book that could be published, but it has still somehow gotten stuck with this warning. Why?

Presumably it’s because the illustrations are of diverse families. One page shows two moms falling asleep while rocking a crib. Another shows two men holding hands as they walk down the street with their baby. Nothing about these images is inappropriate for any age.

Other books that received this warning include Julián Is a Mermaid by Jessica Love, which is about a boy who dresses up like a mermaid, and Red: A Crayon’s Story by Michael Hall, about a blue crayon that is mislabelled as red. None of these three books even use the words “gay” or “trans” or anything else under the LGBTQ umbrella, but apparently just presenting a world that is not aggressively gender conforming is offensive enough to receive a warning label. A boy wearing a dress (as in Sparkle Boy by Lesléa Newman) is not offensive or age inappropriate. Neither are books with queer characters.

Full Disclosure by Camryn Garrett is on this list, a YA book about a teenager who was born HIV-positive, and the whole book is about how the stigma around this has hurt her so much, including forcing her to switch schools. It’s sickening to put a warning label on that book, to say that teens who have this experience are somehow offensive or inappropriate. That only worsens the stigma that this story does such a great job pointing out.

And in the end, it won’t satisfy book banners. After all, they always had the option to monitor their children’s reading and decide what they can and cannot read. What they’re doing now is deciding for all students what they should be allowed access to.

These labels will be confusing for students and parents, because they’re applied to so many different kinds of books. How many students will miss out on life-changing books like The Bluest Eye by Toni Morrison because they feel awkward checking out a book that seems to suggest it’s pornographic? How many parents will not allow their kids to check out Everywhere Babies because they assume there must be a good reason it was given a warning label?

These sort of warning labels roll back decades of progress on fighting homophobia, transphobia, and racism in schools. It’s only recently that diverse books have gained any ground, allowing readers to see themselves in books like never before. This is crucial, especially for vulnerable young people who can feel rejected by their peers, community, and even their own family.

Books like these save lives, and these labels undermine the important work they do.