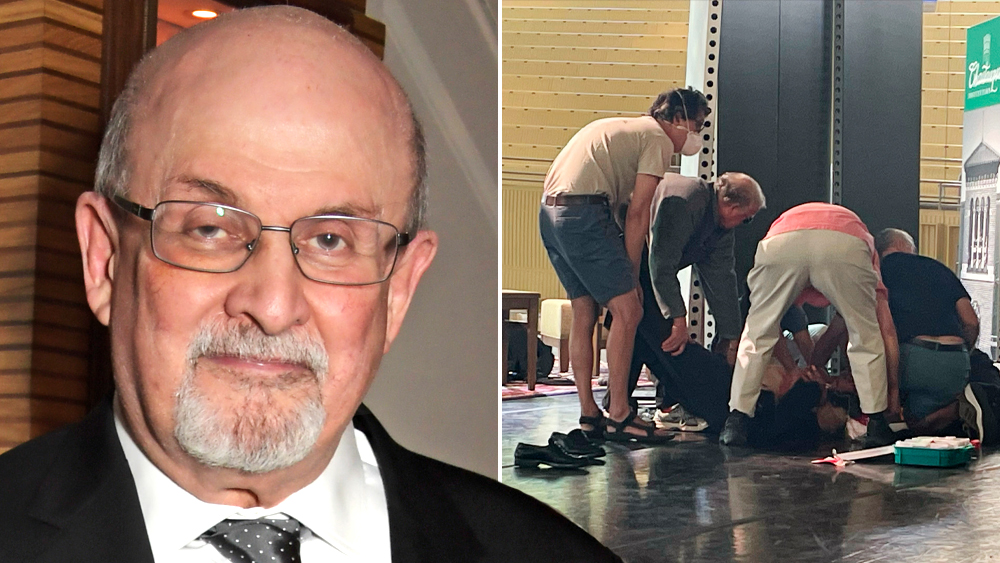 The Satanic Verses author Salman Rushdie has been stabbed in the neck while onstage in New York State, New York Police have confirmed.

The attacker is in police custody and Rushdie was flown by helicopter to a local hospital, according to the statement, which also said the person interviewing Rushdie suffered a minor head injury.

An endocrinologist, who was in the audience and offered assistance, told the New York Times Rushdie had multiple stab wounds and there was a pool of blood under his body. She said people were saying “he has a pulse, he has a pulse.”

At about 11:10 a.m. ET, the Associated Press said its reporter witnessed a man storm the stage at the Chautauqua Institution in Western New York and begin punching or stabbing 75-year-old Rushdie before the man was restrained.

Rushdie’s condition is not yet known as people attempt to gather more information. Images on AP show him surrounded by others who rushed onstage immediately after he was attacked. AP said Rushdie was quickly surrounded by a small group of people who held up his legs, presumably to send more blood to his chest.

New York Governor Kathy Hochul said: “I want to commend the state police. It was a state police officer who stood up and protected him.”

Rushdie has both British and American citizenship and the lecture was supposed to be the first in a seven-part series hosted by the non-profit organization.

Rushdie’s controversial book The Satanic Verses has been banned in Iran since 1988, as many Muslims consider it to be blasphemous, and since the late 1980s there has been a fatwa calling for Rushdie’s death that still exists today, ordered by Ayatollah Khomeini. In 1989, a failed assassination attempt on him in London ended with the bomb exploding prematurely.

Iran’s bounty against Rushdie was raised to $3.3M in 2012, though he previously has dismissed concerns.

The Booker Prize-winning Indian-born novelist has written a number of books both before and after The Satanic Verses, and he co-wrote the screenplay for the film version of Midnight’s Children with Deepa Mehta, with a Netflix TV series of the same project also in the works. Rushdie also appeared as himself in the likes of Curb Your Enthusiasm and Bridget Jones’s Diary. His other works include 1975’s Grimus, 1983’s hame and 1999’s The Ground Beneath Her Feet.

Rushdie was made an MBE a few weeks ago in the Queen’s Birthday Honours List.

A statement from the Foundation for Individual Rights and Expression said the attack is a “horrible reminder that when people stop settling their disagreements with words, they too often try to do so with weapons”

“Mr. Rushdie has long understood free speech’s necessity. He is among its strongest advocates.” it added.